Canoe ceremony highlights link between protection of land and women 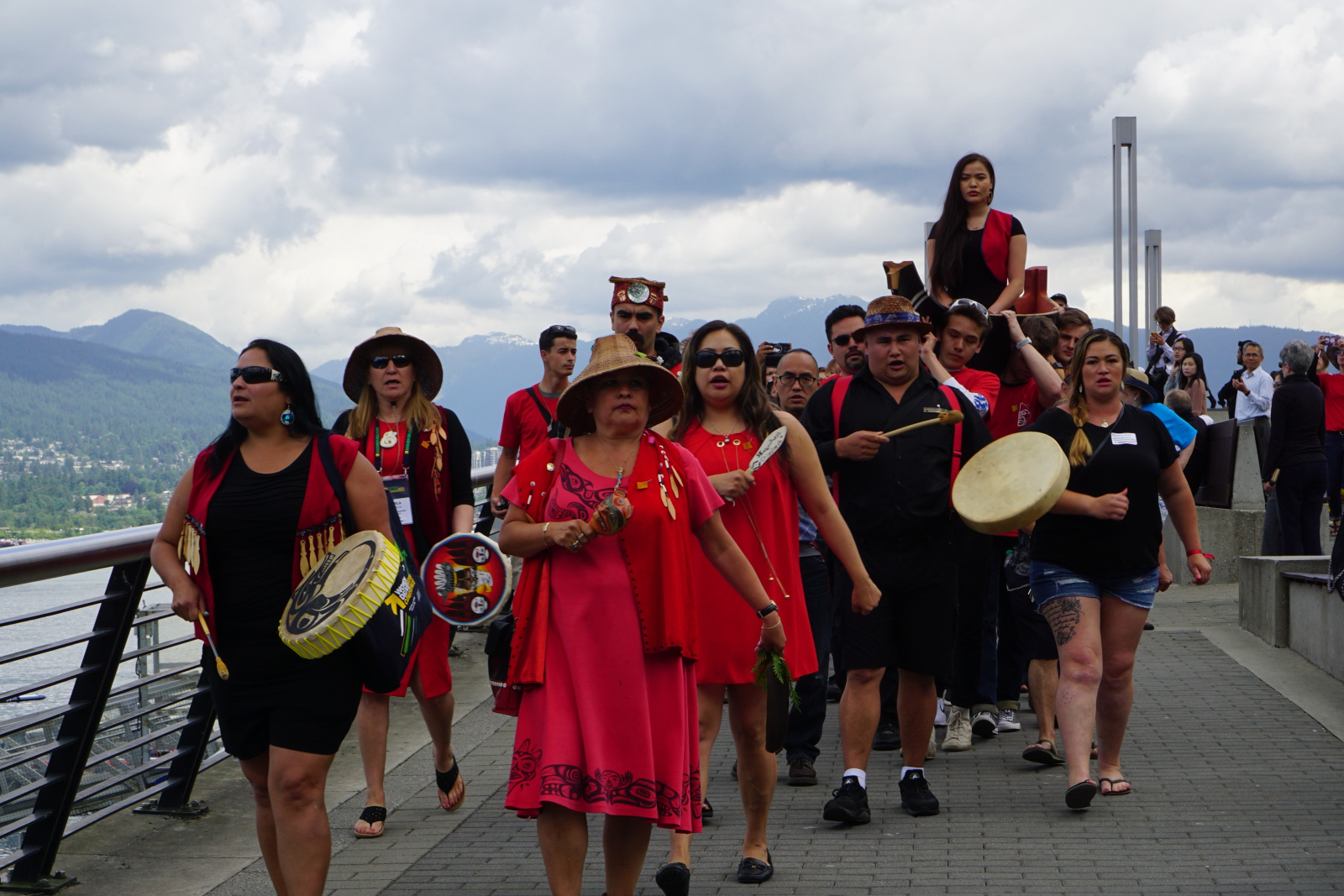 Ta'Kaiya Blaney is honoured in a canoe procession in Vancouver on June 3, 2019, led by Sḵwx̱wú7mesh singers and council members. Photo by Stephanie Wood
Previous story

Ta'kaiya Blaney stepped into a canoe sitting on the steps of Vancouver's Convention Centre, before a group of men lifted her on their shoulders and carried her down the waterfront, as Sḵwx̱wú7mesh (Squamish) singers and council members led the way.

The singer and advocate from the ɬaʔəmen ​​​​​(Tla'amin) First Nation was being honoured in a canoe procession. Arriving at three longhouses set up in Harbour Green Park in the city's downtown, Blaney addressed the crowd that had followed.

“It’s not enough to take a look at the problem that we have across Indian Country with our relatives disappearing, and in the same breath, be approving pipelines that invite that violence into our lands,” said Blaney, held high above the crowd.

The ceremony was connected with an international gender equality conference happening this week in the west coast city — one that counted the prime minister as a guest speaker.

Rooted in Nuučaan̓uł tradition, the canoe ceremony represents when a young woman comes of age. In this case, Blaney was honoured for her leadership.

The ceremony organizer, Eli Enns, explained that Nuu-chah-nulth people were traditionally given different names throughout their lives. When a young women came of age, she was given special education by elder women in her family.

The ceremony was part of the Longhouse Dialogues, a series within the Women Deliver conference. It took place on Monday, the same day that the final report of the National Inquiry into Missing and Murdered Indigenous Women was released.

The national report found that violence against First Nations, Inuit and Métis women, girls, and 2SLGBTQQIA (two-spirit, lesbian, gay, bisexual, transgender, queer, questioning, intersex and asexual) “amounts to a race-based genocide” that is “empowered by colonial structures” such as the Indian Act and residential schools.

Trudeau spoke to the Women Deliver conference Monday afternoon, telling the crowd that “gender equality is under attack” and that he has seen progress on women’s rights “backslide.” On Tuesday his government committed $1.4 billion annually starting in 2023 for women and girls’ health around the world.

The prime minister also said Tuesday that he accepts the report's findings, "including that what happened amounts to genocide," and that his government would produce a plan to address violence against Indigenous women, girls and 2SLGBTQQIA.

"There are many debates ongoing around words and use of words. Our focus as a country, as leaders, as citizens must be on the steps we take to put an end to this situation," said Trudeau.

Trudeau also promised the government would include Indigenous partners, victims and survivors in addressing the report's recommendations.

The government said this spring it isn't satisfied with First Nations consultations on the Trans Mountain oil pipeline expansion project. In April it delayed its decision, in order to fulfill its duty to conduct meaningful Indigenous consultations.

But for Blaney, an environmental advocate since she was 10 years old, protecting the environment and protecting Indigenous women are inextricably connected. She called on the government to take action to end violence against women as well as land exploitation.

“We know, as a fact, that when you bring pipelines into Indigenous lands our relatives go missing. The man camps that are brought in, they are warfare against Indigenous women," she said.

Energy projects like oil and gas pipelines attract more than four men for every woman working in the industry, according to Statistics Canada. Communities have expressed concern and fear of work camps associated with higher rates of sexual assault and violence against Indigenous women.

Enns also asserted that "the connection between industrial resource development 'man camps' and the destruction of Mother Earth and the missing and murdered Indigenous women is absolutely interconnected."

But he pointed to the success of the Meares Island Tribal Park as reason for optimism, as an example of people coming together under the shared values of "social justice, environmental stewardship and humanity."

A co-ordinated plan, aimed at destruction

The National Inquiry launched on Sept. 1, 2016 to investigate disproportionate violence against Indigenous women, girls and queer people. The commission collected testimonies from survivors and families across the country. In that time, the inquiry faced accusations of mismanagement and dysfunction, as well as having an unrealistic timeline.

On June 3, over two and a half years later, it was published. Its core findings surround the notion that "colonial violence, as well as racism, sexism, homophobia, and transphobia against Indigenous women, girls, and 2SLGBTQQIA people, has become embedded in everyday life."

Whether through "interpersonal forms of violence," institutions, the justice system or "the laws, policies and structures of Canadian society," many Indigenous people have grown up normalized to violence, while many Canadians have shown "appalling apathy" to addressing the issue, the report found.

The report gives 231 recommendations, or "calls for justice," that apply to all levels of government, including First Nations governments. They cover everything from improving education and services in Indigenous communities, increasing representation of Indigenous women, girls and 2SLGBTQQIA in governance, to better consideration for the safety of Indigenous women by mining, oil and gas companies.

But some non-Indigenous critics pushed back against the report's conclusion that Canada perpetrated genocide.

Bernard Valcourt, who was Aboriginal affairs minister under former Conservative prime minister Stephen Harper, tweeted, "how far do those activists will go? What has been the cost to Canadians for this propagandist report? What have we learned that we did not already know?"

#mmiw families and advocates have give so much to the process. The pain& systemic racism with Rcmp, justice system #ConservativeLeadership Now @BernardValcourt wants minimize & put down activists. @AndrewScheer get your team organized. Views of Canadians in leadership. Do better

Valcourt's tweet attracted swift condemnation from the Indigenous community and supporters. JB the First Lady, a Vancouver-based hip-hop artist from the Nuxalk and Onondaga Nations, tweeted for Andrew Scheer to "get [his] team organized."

Another user shared a photo of Valcourt sitting down during a standing ovation at a Truth and Reconciliation ceremony when Senator Murray Sinclair called for an inquiry into missing and murdered Indigenous women.

June 2015 - TRC ceremony, then-Justice @SenSincmurr called for an inquiry to #MMIWG which rcvd a standing O (except for 1)@BernardValcourt’s (INAC Minister for #CPC) disdain at the mere suggestion was evident.

June 2019 - Valcourt (no title) is attacking the final report. pic.twitter.com/WYlVxreBSe

The report actually anticipated the reaction to the word genocide, as it begins by defining the term. It cites the Second World War scholar Raphael Lemkin, who argued that genocide does not always mean immediate mass killings, but "a coordinated plan of different actions aiming at the destruction of essential foundations of the life of national groups," to the point of annihilation.

The report goes on to discuss legal implications of genocide, and the "decades-long history" of applying the term genocide to colonial conquest in North America, including in well-known researched works in 1973, 1993 and 2003.

Canada’s colonial history "provides ample evidence" of genocidal policies that the state was founded upon, the inquiry stated, adding, "modern Canadian policies perpetuate these colonial legacies, and have resulted in clear patterns of violence and marginalisation of Indigenous peoples."

Officially, Canada recognizes five genocides: the Holocaust, the Holodomor, the Armenian genocide in 1915, the Rwandan genocide in 1994 and the ethnic cleansing in Bosnia from 1992 to 1995.

A 'beacon of hope' for women and land preservation

Enns, who arranged Blaney's canoe procession, is president of a cultural and environmental preservation group called the Iisaak Olam Foundation. The foundation is helping to rebuild Opitsaht, a village on Meares Island, located in Clayoquot Sound on the northwest coast of Vancouver Island.

Enns described the event in 1984 as one where Indigenous and non-Indigenous people, as well as people of all ages and genders, came together to defend the forest. But he said the ceremony "isn't just about celebrating what was accomplished."

"It's about providing a beacon of hope, that it is possible to do the right thing. It's possible to come together," said Enns.

Being held up in the canoe 'felt powerful'

During the ceremony Blaney was held high in a canoe, lifted by a group of young men from the Moosehide Campaign, a grassroots organization of boys and men against violence towards women.

They carried her from the convention centre to three longhouses set up at Harbour Green Park. Sḵwx̱wú7mesh (Squamish) singers and council members sang at the front of the procession.

Enns and the foundation plan to make fibre glass replicas of the canoe and its commemorative paddles, and put the revenue towards scholarships to children in economic need.

Joleen Mitton, a Cree designer, was invited to take a photo in the canoe. She founded Vancouver Indigenous Fashion week, which returns in October. But she passed on the honour to 19-year-old Shai Morrisseau.

"We were just talking about all the trials and tribulations that she's gone through," said Mitton of Morrisseau, who has just aged out of foster care. "I just think she's a really strong woman, and she's the future."

Mitton says she wanted Morrisseau to be honoured in the canoe to acknowledge her hard work in school, and the fact Morrisseau is now mentoring young girls herself.

"It felt very powerful," said Morrisseau about being lifted in the canoe. "To be honest, I felt like crying."

Morrisseau is Ojibwe Anishinaabe from Sagkeeng First Nation in Manitoba. She says she didn't have an easy upbringing.

"I had a lot of people tell me that I really wouldn't be here," she said. "It was just nice to be held up by a lot of people who don't really know me, but that doesn't mean they don't care or support me."

She said she hopes the government turns to Indigenous Peoples to begin meeting the 231 recommendations outlined in the national inquiry's report.

"I really think that the government should follow our lead," she said, concluding governments should listen more closely to "the people who have taken care of this land for thousands of years."

The thought of a ceremony

The thought of a ceremony where a young women is supported by the men of her community gives me solace in my grief for our stolen sisters. Thank you.
Yes it was and still is a genocide.
I recall my father explaining to me as he sat mending his gillnets, that the kids I played with on the docks were beaten if they spoke their own language. English, a second language for me as well made it clear how devastating that was and is.
As a white settler woman I am truly, deeply sorry. Those words seem empty.
I vow to do everything in my power to make amends and bring power, self determination and love into the daily lives of our First Nations women, men elders and all the children, past, present and future.