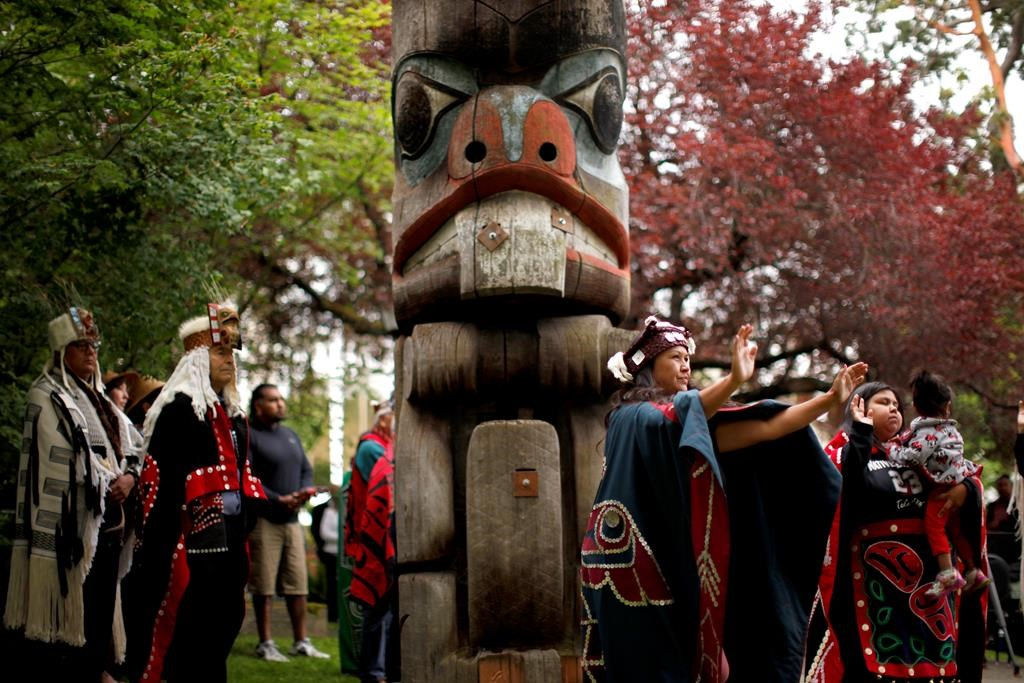 Women dance during the Abyas song to cleanse and bless the ground for the cedar mortuary pole replica carved by Mungo Martin in 1955 was removed from Thunderbird Park at the Royal B.C. Museum in Victoria, B.C., on June 5, 2019. Photo by The Canadian Press
Previous story
Next story

Dancers circled an aging totem pole that tells the story of a murdered Haida woman before it was hooked to a crane and gently lowered to the ground on Wednesday.

The replica Haida mortuary totem stood at the Royal British Columbia Museum's Thunderbird Park for almost 65 years, but engineers determined the pole suffered internal damage through exposure to the elements and was at risk of falling.

The ceremony was the second such gathering in recent days to bring down totems at the end of their life spans.

Haida chiefs stood next to the totem as Indigenous dancers and singers formed rings around the eight-metre tall pole, chanting and spreading eagle feathers.

"This piece can also be finally laid to rest," said Haida Chief Allan Davidson. "Historically, our poles, they weren't carved to stand forever. This one is also going to finally go to its final resting place."

Reg Young, a hereditary Haida chief, said the totem was carved to commemorate a woman who lived in the former village of Tanu in the late 1800s. The woman was shot while travelling on the San Juan Islands, located in Washington state waters near Vancouver Island.

Tanu, on Haida Gwaii on B.C.'s north coast, is a designated National Historic Site of Canada and is part of Gwaii Haanas National Park Reserve.

Young said the amount of detail on the replica totem reveals the woman was highly regarded in the community.

"She must have been a very important person," he said. "The poles were like our literature. It showed who they were, where they came from and what crests belonged to them."

Lucy Bell, head of the museum's Indigenous collections and repatriation department, said mortuary poles have boxes at their tops to hold the deceased's cremated remains.

The Thunderbird Park totem had the mortuary box, a carved hawk, eagle, whale, beaver and crests of the deceased, and parts of hats, which are signs of wealth earned at potlatches, said Bell.

The original totem was removed from Tanu in 1911. The replica was carved in 1955 by Mungo Martin, a legendary Indigenous artist and leader, widely known for his wood sculptures and preservation of Indigenous music.

Bell said the replica Haida pole will now be transported to Martin's homeland, the Kwakiutl First Nation near Port Hardy on northern Vancouver Island, where it will become part of a training program for young carvers.

She said witnessing the mortuary totem ceremony caused her to reflect on this week's release of the final report on the National Inquiry into Missing and Murdered Indigenous Women and Girls.

Bell said as she was watching a ceremony honouring a murdered Haida woman, she thought about how too many Canadian families are suffering because they cannot put their loved ones to rest.

"A lot of families of missing and murdered women don't have that opportunity, so I remember them today as well," she said.

Last month, a replica of a house post totem that dated back to 1870 was taken down from Thunderbird Park and is slated to return to the northern Vancouver Island village of Quatsino where the original pole stood. Martin also carved the Quatsino replica in 1954.