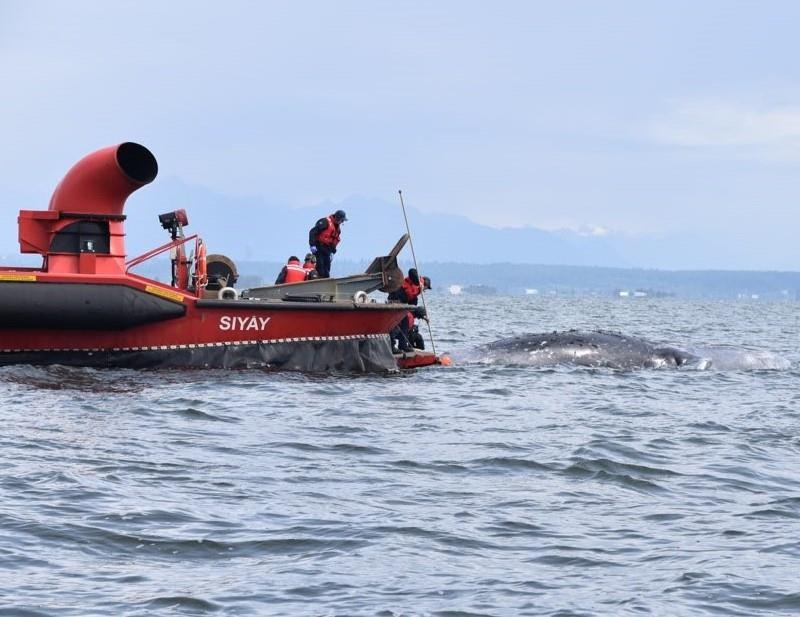 Crews work to secure a dead grey whale to a Coast Guard hovercraft in Boundary Bay, B.C. on Wednesday, June 5, 2019. Handout photo by The Department of Fisheries and Oceans
Previous story

A sixth dead grey whale has been found off the coast of British Columbia amid an unusually fatal year for the animals.

Department of Fisheries and Oceans crews spotted the dead mature female floating in Boundary Bay near the United States border on Tuesday.

DFO marine mammal co-ordinator Paul Cottrell says crews attached a line to the whale on Wednesday and used a coast guard hovercraft to tow it to a base on Sea Island in Richmond.

Cottrell says a necropsy will be completed on the animal, which is 13 to 15 metres long and weighs about 20 tonnes.

He says it's the sixth grey whale to die this year in B.C. waters, with the first found near Victoria, the second off the west coast of Vancouver Island and three others found near Haida Gwaii.

Cottrell says the deaths are consistent with what scientists are seeing off the coasts of California, Oregon, Washington and southern Alaska, as the whales migrate north in the spring.

"These animals are dropping out that don't appear to have gotten enough nutrition from last year's feeding season," he says.

There haven't been this many deaths since 2000, but the grey whale population has been doing very well since that time and has grown to about 27,000 animals, Cottrell says.

"We're looking at body condition and cause of deaths for all these animals to hopefully piece it together," he says, adding DFO is working closely with the U.S. National Oceanic and Atmospheric Administration and Mexican officials.

Grey whales forage for food in sediment in estuaries and shallow environments, eating anthropods and other small creatures, and Cottrell says there's an indication the productivity of anthropods was not strong in the Bering Sea last year.

He also says Mexican scientists who do research on grey whales in the winter observed that 50 to 55 per cent of the population was looking skinny, which is much higher than a typical year.

Two grey whales stranded in B.C.'s Boundary Bay, headed back out to sea:DFO