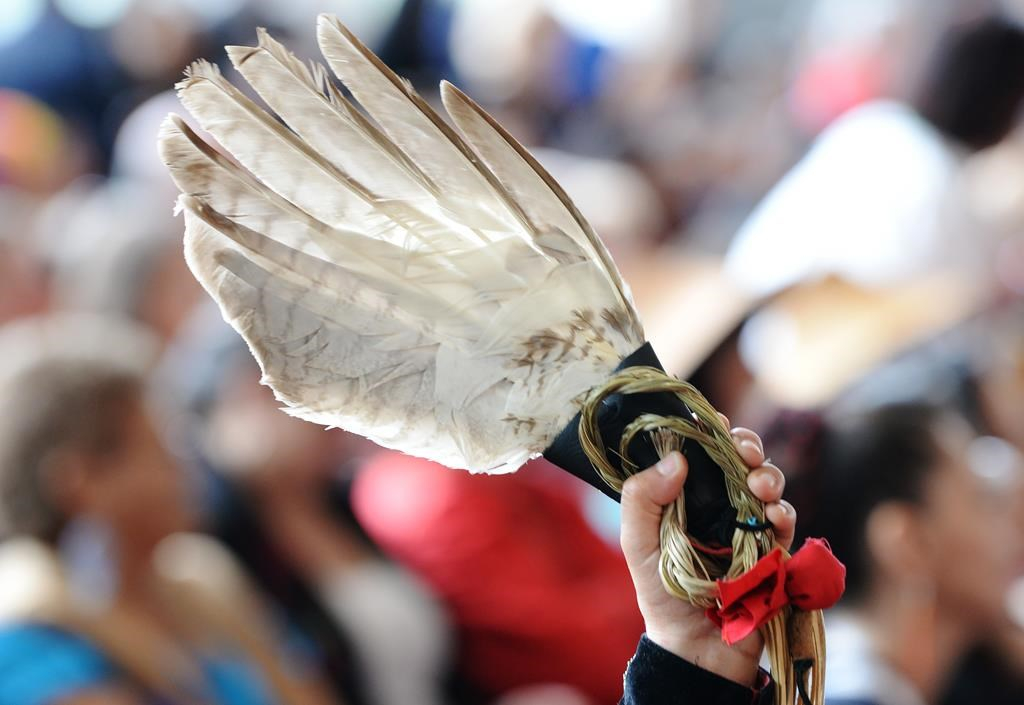 A person holds an eagle feather at the closing ceremony for the National Inquiry into Missing and Murdered Indigenous Women and Girls in Gatineau, Que., on Monday, June 3, 2019. File photo by The Canadian Press/Adrian Wyld
Previous story

The head of the First Nations Chiefs of Police Association is calling on Ottawa and Quebec to address the chronic underfunding of Indigenous police forces outlined in this week's report of a national public inquiry.

Dwayne Zacharie says the lack of funding for First Nations police forces is a long-standing problem that needs to end.

"First Nations communities deserve to have the same service that everyone else is getting," said Zacharie, who is also the chief Peacekeeper for the Mohawk community of Kahnawake on Montreal's South Shore.

"For that, we require proper resourcing, whether it's funding or human resources, meaning bodies to go out and do it."

A supplementary report from the inquiry into murdered and missing Indigenous women and girls dealing specifically with Quebec noted that the province's 22 independent Indigenous police forces are the most of any province.

But the report said "chronic underfunding" has resulted in problems, including recruitment and retention issues, a lack of female and Indigenous officers, difficulty in accessing training and poor communications between departments.

"The national inquiry has also noted that Indigenous police forces have a chronic shortage of human resources and training," it noted.

High turnover rates mean that the complex job of policing Indigenous communities often falls to young and inexperienced officers with only a few months on the job, it said.

The report said some of the problems stem from a complex funding agreement between the communities and the federal and provincial governments, which must be renegotiated every three to five years.

This "makes it difficult, and sometimes impossible, to implement plans and strategies beyond a three-year time frame," it notes.

Zacharie said the problem is that First Nations police are often viewed as "second-class" forces, even though their officers graduate from the same police schools.

He said that while the federal government recently promised to ensure the funding agreements would become permanent, it's hard to be sure until First Nations police forces are declared an essential service — something he urges Ottawa to do.

"We need to get more advanced training, we need the resources to do more, to give our communities the services we deserve," he said.

Lyle Cox, an inspector with the Eeyou Eenou police force that serves Cree communities of northern Quebec, agreed that First Nations policing needs to be made an essential service.

"It is questionable for us to know if we can make a career out of policing and retire, because we never know if the (First Nations Policing Program) will be renewed with the governments," he said by email.

The report issued a number of recommendations related to Indigenous police forces.

These included increased long-term funding, better co-ordination between police forces, better training for police cadets on the socio-cultural realities of Indigenous communities and access to full training for Indigenous officers.

LeRoux's 26-year-old son, Thierry LeRoux, was killed in the line of duty as he responded to a domestic call in Lac-Simon, about 500 kilometres from Montreal in Quebec's Abitibi region. He was shot in February 2016 by a man who then took his own life.

LeRoux said his son and partner were the only ones on duty, which forced them to enter a dangerous situation alone, with the nearest backup 40 minutes away. Their radios didn't allow them to call for help directly, meaning the message would have had to pass through another person, LeRoux said.

"This lack of financing means they're ill-equipped, don't have all the training they need, aren't numerous enough, and the communications to get reinforcements are worse the farther away you are," he said in a phone interview.

After his son's death, LeRoux and three of his son's former colleagues started a foundation in Thierry's name, which helps to fund sporting and educational opportunities for youth in the Val-d'Or region as well as in Lac-Simon. He said the police force also changed its policies regarding staff levels and communication.

He believes the system failed not only his son but also the 22-year-old gunman. "I hope we don't wait to lose other people before making the effort we need to ensure it doesn't happen again," he said.

Pierre Saint-Antoine, a spokesman for Quebec's police academy, says the school is taking the report seriously and is working hard to increase the number of Indigenous officers and improve their training.

"There are clearly still things to improve, and we will reflect with our Indigenous partners on what needs to be done," he said in a phone interview.

He said the school graduates about 15 officers each year from its Indigenous police officer program, which is designed to prepare officers for the difficult conditions they can face in remote communities.

He said all police officer candidates, including those in the regular stream, receive training on the history of residential school and Canada's legacy of colonialism from Indigenous partners, including the Quebec Women's' Association.

Policing under scrutiny at inquiry over missing, murdered indigenous women