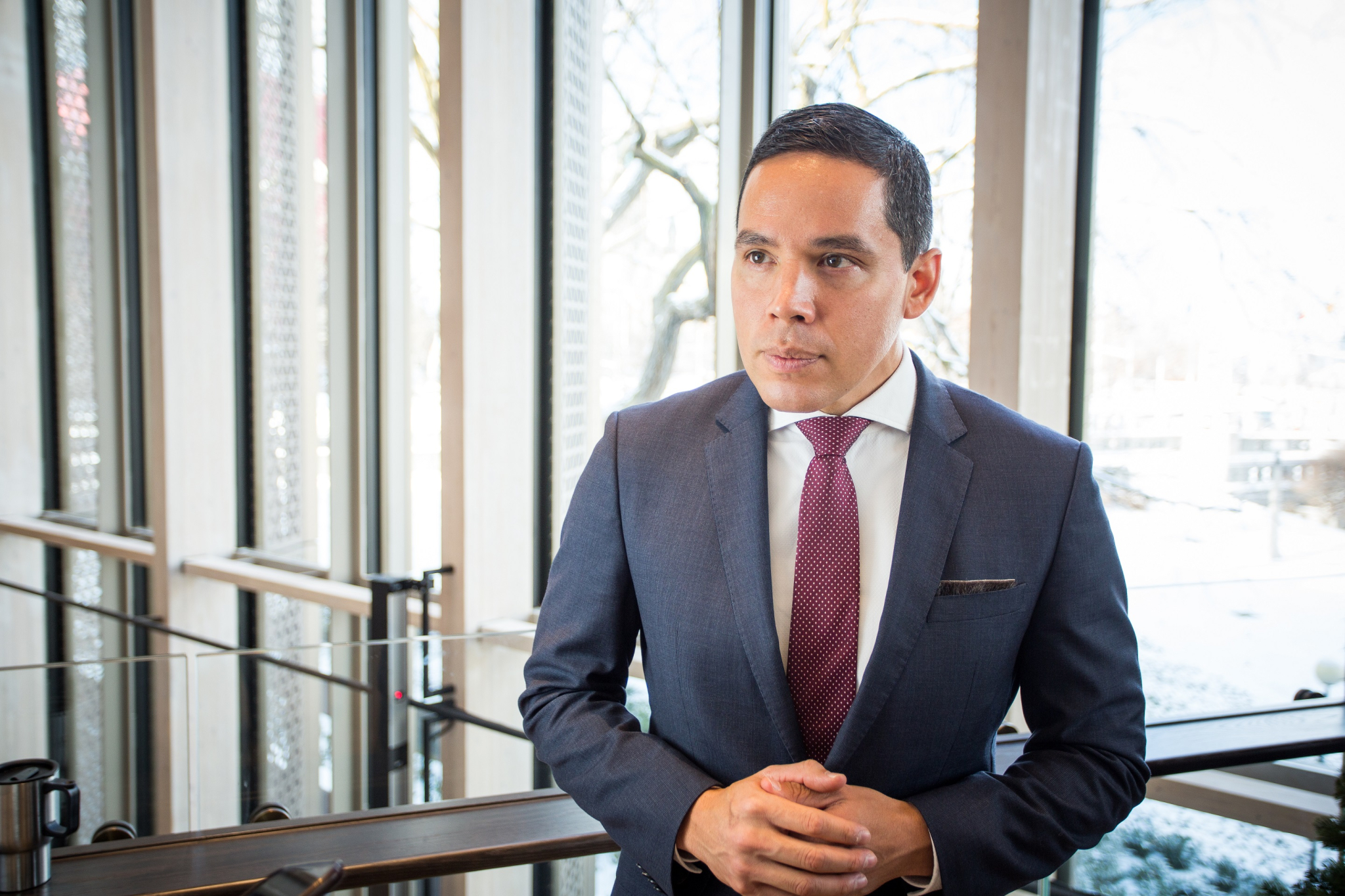 Natan Obed, president of the Inuit Tapiriit Kanatami, at the nation-to-nation summit in Ottawa in 2017. File photo by Alex Tétreault
Previous story
Next story

Inuit have long been portrayed as living on the front lines of the climate crisis, forced to deal with shrinking ice seasons and declining availability of food. Less often considered is their seat at the table when Canada crafts climate action.

The national Inuit organization in Canada is hoping to change that with proposals in a National Inuit Climate Change Strategy released Friday in Inuvik. The strategy by Inuit Tapiriit Kanatami (ITK) calls for Inuit to be "meaningful partners in the development of the climate change policies that affect us."

"We use ice for transportation between communities, and also for hunting, and we’ve had many tragedies in the past decade of experienced Inuit falling through the ice and some perishing, who have lived in these areas their whole lives, who have the combined experience of 100 generations and more about the places that they’re going and the ways in which they’re travelling," he said in an interview.

"We are at a crisis now where this information, this knowledge, this understanding of our land, and how to travel especially on sea ice, is being eroded by climate change, and by the way in which ice systems are changing so rapidly."

Inuit, for too long, "have been brought forward to give a lived experience with climate change, and little else," said Obed.

Inuit communities, however, have “huge considerations and concerns about the sustainability of our communities and our environment and our ecosystems," he added. "But also from a policy lens, we want to be able to participate in the conversations that lead to action across this country.”

The Trudeau government said it will contribute $1 million toward the strategy’s implementation during its first year. Environment and Climate Change Minister Catherine McKenna said Inuit are “disproportionately experiencing the impacts of climate change.”

“Canada’s North is warming at three times the global average, impacting Inuit way of life, economies and communities," she said in a statement. "Today’s strategy is climate action by Inuit, for Inuit. We will continue to work together to tackle climate change and protect our northern communities.”

'Inuit have largely been excluded' from decisions

ITK’s national Inuit climate change committee listened to climate-related issues from each of the Inuit regions. The document presents common concerns across Inuit Nunangat, the collective name for the 51 Inuit communities spread across the North, and gives examples of best practices in some areas.

The strategy is designed to be consistent with the Paris Agreement on climate change and Canada’s response in terms of implementing the Paris targets, Obed said. “If Canada wants to get anywhere near its specific actions, and the obligations it has set forth, then the work that it can do with Inuit will help get it closer to that."

“Inuit must be meaningful partners in the development of the climate change policies that affect us. The recognition of the inherent rights of Inuit self-determination detailed in constitutionally-protected land claims agreements, and the United Nations Declaration on the Rights of Indigenous Peoples, must be the first step when seeking to develop climate policies.”

The strategy also calls for improved “Inuit and environmental health and wellness outcomes,” for reducing the “climate vulnerability” of Inuit food systems, for “climate resilient new builds” and retrofits in terms of infrastructure, and to support “regional and community-driven energy solutions leading to Inuit energy independence.”

Some of these concerns, such as the link between the environment and Inuit health, food insecurity in Inuit communities and a lack of climate-resilient infrastructure in the North, are well-documented areas of public policy. Obed said they take on new importance when seen through a climate lens.

That’s in part because Inuit Nunangat isn’t contributing carbon pollution to the atmosphere as much as other regions of Canada. It can cut carbon in some areas. For example, all electricity in Nunavut communities is generated by diesel power plants fed with imported fossil fuels. But by and large, its carbon footprint is much smaller.

“With some climate change strategies, the focus is on reducing carbon and trying to reform economies, or major polluters. We don’t have that,” said Obed.

“So the focus is then on how this issue is affecting us and our society — which is why it might seem similar in some of the more general conversations we have about policy, but when we think about climate, these are the things that the Inuit think about.”

The strategy calls for the development of regional climate strategies that would be linked to the national plan, and to ensure climate information is available to all Inuit, including through creating “information sharing best practices.” It also envisions “Inuit-led and co-produced climate change research and monitoring.”

Success in implementing the strategy will be partly dependent on working with Ottawa, the provinces and territories.

That hasn't always been easy; a recent study in the Canadian Medical Association Journal, for example, showed that food insecurity in Nunavut actually grew after a federal program to battle hunger in the North was launched.

Meanwhile, there are questions lingering about oil, gas and mining development around Baffin Island as a five-year moratorium on Arctic offshore energy development is coming to a close next year.

Obed said since climate change is an issue that Inuit will have to deal with no matter what, then partnership with governments isn’t a deal breaker — but it will help.

“To get the most out of this time, and to get the outcomes we want, positive relationships with the federal government and with provinces and territories are essential,” he said.

“We’re hoping that we can work with governments on the implementation plan and funding for things like infrastructure, or for energy, or for food security initiatives, that can help us get to the common goals and the shared interests that we and governments have together.”

The Minister of Health in

The Minister of Health in Stephen Harper's government, a resident of Iqaluit, claimed that the members of her family hunting on Baffin said that polar bears were not declining in number and so were not endangered.
The mainstream media reported this alongside conflicting counts made by scientists across the Canadian polar region.
The latest reports about caribou populations suggest that scientific projections from the last century regarding the effect of changing precipitation with climate change would result in starvation for caribou and musx- ox were spot on.
Can the Inuit people themselves not reject the politics of climate change denial?

Read “The Right to be Cold”

Read “The Right to be Cold” by Sheila Watt-Cloutier and you will have a better understanding of the matter.