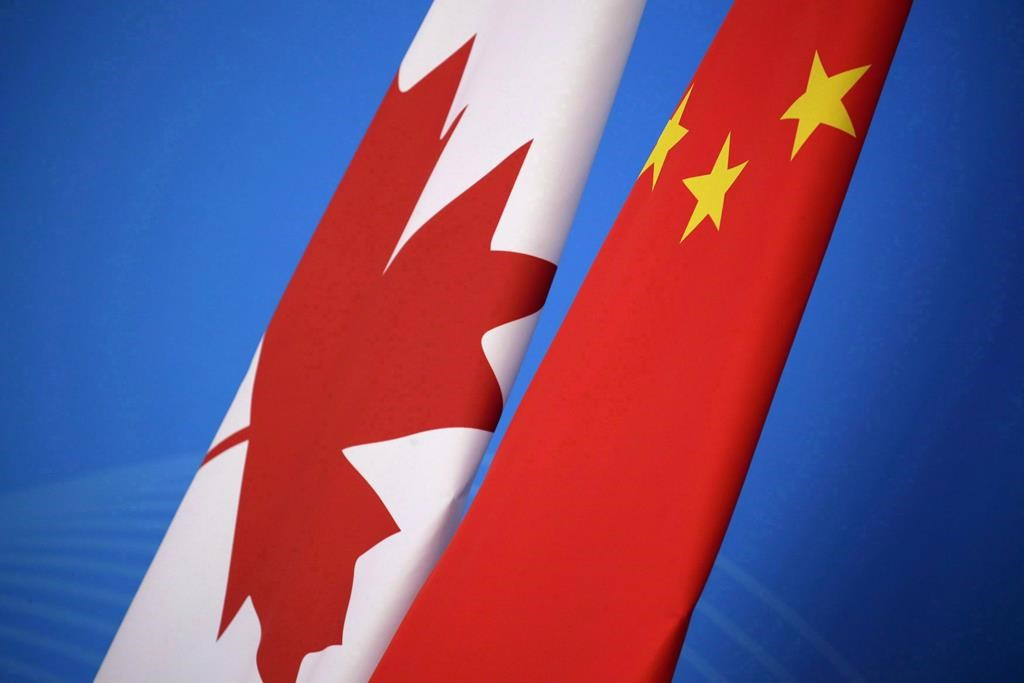 Flags of Canada and China are placed for the first China-Canada economic and financial strategy dialogue in Beijing, China, on Monday, Nov. 12, 2018. File photo by Jason Lee/Pool Photo via AP
Previous story
Next story

One industry leader said Thursday that, without a clear explanation, Canadian soybean exports to China plunged suddenly from 3.2 million tons over the final four months of 2018 to just 3,700 tons through the first four months of this year.

Relations between Canada and China have deteriorated since the December arrest in Vancouver of Huawei senior executive Meng Wanzhou at the behest of the United States.

China was outraged by Meng's arrest and has since detained two Canadians on allegations of espionage and sentenced two other Canadians to death for drug-related convictions.

Chinese authorities have also blocked imports of Canadian canola seeds, alleging they found pests in shipments, and have increased inspections and paperwork related to pork.

"When it comes to China, obviously, our top concern is the release of Canadians who are detained in an arbitrary way by the Chinese for political reasons," Trudeau said in French on Thursday during a visit to France, where he marked the 75th anniversary of D-Day. "We are also concerned by their actions on canola and the potential of other actions on other products."

Trudeau told reporters that he will see if it's "appropriate or desirable" to have a conversation directly with Chinese President Xi Jinping about a number of bilateral difficulties later this month at the G20 summit in Japan.

Ron Davidson, executive director of Soy Canada, said in an interview that China's purchases of Canadian soybeans collapsed at the end of last year following a run of very strong exports.

"It's not a slowdown — it's a virtual halt," said Davidson, whose members have reported the drop to Bibeau. "We can see what's happening, but we aren't certain why."

He said it's not unusual to see soybean exports decrease during winter months, but the speed, magnitude and timing of the crash this time around has alarmed the industry.

Davidson said he's received reports of Canadian soybean containers held up in Chinese ports for longer than usual as authorities there conduct additional tests. It's possible, he added, that the drop is partly due to an increased reliance by China on soybeans from other parts of the world.

Soybeans are Canada's third-most valuable agricultural export after canola and wheat, he said.

Any prolonged crackdown by Canada's second-biggest trading partner on shipments of key products like soybeans and canola could deliver a blow to the national economy.

Conservative Leader Andrew Scheer's spokesman said it's not enough for Trudeau to be concerned because he's not a casual observer when it comes to the dispute with China.

"He needs to actually do something," Brock Harrison wrote in an email Thursday.

"Mr. Scheer has on several occasions urged him to take concrete steps to respond to China's actions against Canada and send a message that Canada won't be pushed around. He has refused to act."

The federal government says it has tried unsuccessfully to send a delegation of inspectors to China to examine Chinese evidence of pests in canola shipments. Canada has also been unable to schedule high-level engagements on the matter despite multiple efforts.

"They agreed to have more sustained discussions, telephone conferences on the subject — and they did not close the door to the delegation," she said. "We are still asking for that, but the conversation has been re-activated and yesterday we could feel that we were at a different level ... This is encouraging."

Earlier this week, China's ambassador to Canada said in an interview that Chinese officials investigated Canadian canola based on regulatory and scientific principles, and provided "concrete" documents to Canada to justify their concerns.

Lu Shaye added that the relevant Chinese departments no longer maintained contact with their Canadian counterparts, suggesting the matter was closed.

It is high time for Canada to

It is high time for Canada to wean itself off the Red Dragon. Say NO to Bullying. We can find other markets for our products and resources, there's four Billion other people in the world. We can go to Ericsson or Nokia for 5G. Over time some other Third world countries will find us as a Market for the Short-Lifespan Junk we currently rely on China for.
Democracies have elections to change Governments, even the US has Term Limits [an end to Trump!], whereas in China, Xi Jinping has just had himself appointed President [read Extreme Dictator] For Life. If we bow down to them now, they will have us on our knees for Centuries. Just Walk Away, this problem will get WAY worse before it gets better.