Standing up for what she believed in gave her long life 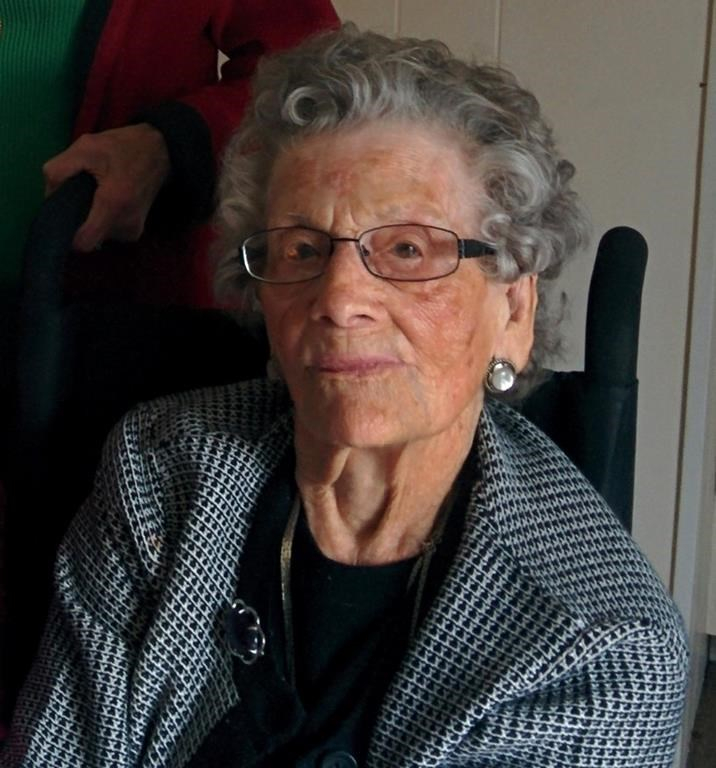 Ellen (Dolly) Gibb is shown in a 2014 handout photo. Canada's oldest woman, whose longevity and zest for life won her national attention - and an admiring nod from astronaut Chris Hadfield - has died at 114. Handout photo from Facebook-Dave Crozier
Previous story
Next story

Once birthdays went into the triple digits, she would receive cards from the Queen and politicians at all levels of government. Reporters would come knocking to learn the secrets to her longevity.

"She was pretty connected to all of us," her grandson Dave Crozier said by phone Friday. "We feel so fortunate to have had her in our lives for so long."

He said Gibb died peacefully Wednesday at a nursing home in North Bay, Ont., with her daughter, Sue Crozier, who is Dave's mother, holding her hand.

"Whenever you think of her gone, you just think of how easy she went," Sue Crozier said. "We should all be so lucky to go that way."

Even as she approached 80 years old, Sue Crozier, who lived with her mother, said Gibb would worry every time she left the room.

"I think she really felt she was looking after me," Sue Crozier said. "It could have been some part of what kept mom alive so long."

This matriarchal tenacity extended to the rest of her kin, said Brittany Duggan, Gibb's great-granddaughter. She would spend hours studying photos of family members, many of whom she rarely got to see.

"She was sharp, but she also worked at it. She just loved people. She loved everyone who came through her house," Duggan said by phone from Squamish, B.C. "Really her presence and visiting her brought the family together."

Born in Winnipeg on April 25, 1905, Gibb was the daughter of a Metis woman and a Scottish-Canadian prospector who had sought his fortune in the Klondike gold rush, said Duggan.

When Gibb was five her mother died after giving birth to another daughter, and her father raised Gibb and her siblings on a small farm in what is now Winnipeg.

Gibb developed an interest in fashion in her teenage years, which earned her the nickname "Dolly." As a young adult, Gibb put her passion to professional use by working at the Eaton's department store, but was forced to quit when she got married to her husband, Dave.

"She always sounded disappointed when she talked about it," said Duggan. "I think if she had lived at a different time, she would have kept working."

Gibb became a homemaker, and the young couple had two daughters. In 1941, the family moved to Thunder Bay, Ont., where Dave took a job at an airplane manufacturer as part of the effort to fight the Second World War.

After 40 years of marriage, Gibb lost her husband in 1968, but in a show of independence, lived alone in their home until the age of 100, said Duggan.

Over the years, people have offered a wide array of explanations for Gibb's longevity.

She never smoked, and only started drinking in her seventies, enjoying a daily beer in her later years. She walked almost everywhere, and ate in moderation, including indulgences such as cream and butter as well as Timbits.

But Duggan believes that the force that propelled Gibb for more than a century was her fiery spirit.

"She wasn't trying to outlive anyone or set any records," she said. "I think if you asked her, she would have said (the secret is) to stand up for what you believe in."

A celebration of her life will be held Saturday in North Bay.