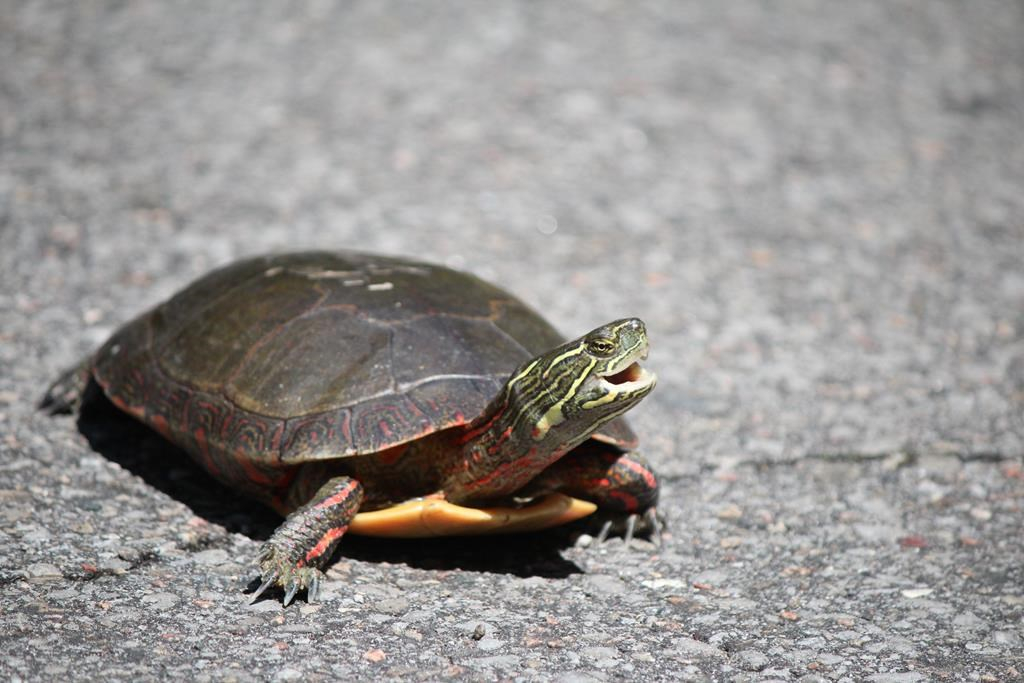 A painted turtle is seen in this undated handout photo. Handout photo by The Nature Conservancy of Canada
Previous story

Why did the turtle cross the road? — It may sound like the opening of a joke, but the Nature Conservancy of Canada is urging motorists to help the slow-moving reptiles get to the other side.

Kristyn Ferguson, a program director with the group, says this is the time of year when turtles are crossing roadways to get to nesting areas and to warm up on the gravel and asphalt.

"As we've encroached roads into wetlands habitat, which is a turtle's traditional home, they are having to cross roads to get to other parts of their habitat. They are sometimes sitting right in the middle of the road warming up, and all of those things are increasing the chances they're going to encounter a vehicle collision," she said.

The populations of all eight turtle species in Ontario and six species in Quebec are considered at risk, Ferguson said.

"This season I've already saved three turtles off the road. I typically do five to seven a year, and that's just me," she said.

Turtles are considered an important part of wetland ecosystems because they eat dead leaves, insects and debris. They are often referred to as "wetland janitors."

"Without turtles in that system we don't actually know what would happen. It could be catastrophic if that key element of the wetland ecosystem was removed," said Ferguson.

She said turtles can take up to 25 years before reproducing and their egg survival rate in very low, so even one turtle being killed by a car can have a major impact.

The Nature Conservancy in Quebec has a website (carapace.ca) where people can report turtle sightings and upload photos, which can help inform where conservation efforts should be directed. To date, the website has received almost 2,800 documented sightings of turtles.

In Quebec, 75 roads and highways have been identified as "hot spots" for turtle-vehicle collisions.

Ferguson said the Nature Conservancy of Canada encourages motorists to slow down when they see a turtle on the road and check to be sure they can safely steer around it.

They have also produced a video with tips on how to move a turtle. (https://www.youtube.com/watch?v=F4aPiN-kGYA)

Ferguson said most turtles can be easily carried across the road, while larger snapping turtles can be lifted by the back of their shells and "walked" across like a wheelbarrow.

She said pushing or dragging a turtle is not recommended because their underside shell can be damaged.

Turtles lead us to their secret seagrass meadows