Fire-weary Western Canadians are picking up stakes and moving on 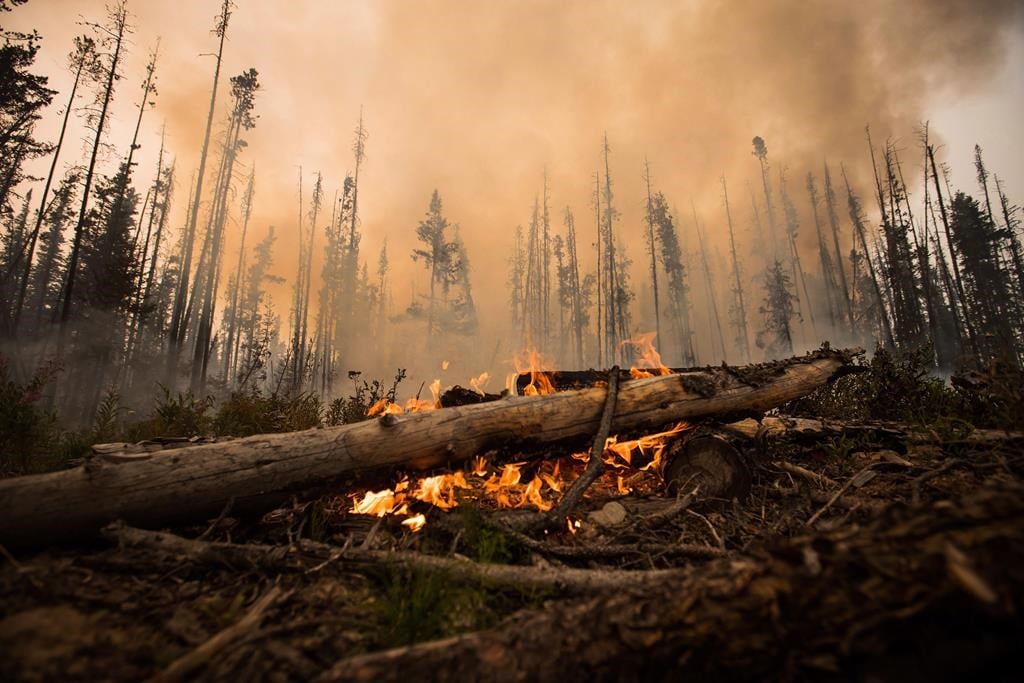 A wildfire burns on a logging road near Fort St. James, B.C., in 2018. The risk of wildfires is expected to increase due to climate change. File photo by The Canadian Press/Darryl Dyck
Previous story
Next story

The 2019 fire season in Western Canada has begun, but this year some former residents of Alberta and B.C. won’t be there.

They’ve lived through the last two years of devastating wildfires and have moved on, for good. Seeking safety for themselves and their families, they’ve picked up stakes, often taking an economic hit.

“I sold my home and got out of it,” says Darlene Powell, 73, who has moved from Kelowna, B.C., to Carleton Place, Ont. “I just couldn’t handle how bad the air quality was. My breathing was getting worse and I ended up on a puffer to ease the tightness in my lungs.”

There are no hard statistics on the number of people leaving Western Canada due to the smoke from wildfires, but there’s evidence that residents like Powell, young and old, often on fixed or limited incomes, are making tough choices about where they want to live and to work. The decisions are being informed by many factors, but often the most pressing concern is the increasing frequency of forest fires.

With experts saying that anthropogenic climate change is creating the conditions for more fires, the past two summers have been the worst on record in B.C. in terms of acreage burned, according to BC Wildfire Service statistics. And parts of Alberta have seen the driest spring on record in 2019.

News reports focus on people forced to evacuate due to the immediate threat of fire, as was the case this year in the Alberta community of High Level, and of course the worst-case scenarios, when entire municipalities burn, as in Slave Lake and Fort McMurray. But much larger populations are affected by smoke, with long-term exposure taking a psychological as well as a physical toll.

“I just moved east along with my partner and infant daughter, after about 15 years in Alberta,” says Georgia Fisher, 34, whose partner is from Alberta and who now makes Peterborough, Ont., her home. “I wouldn’t have begun to consider this move if it weren’t for last summer and all the smoke.”

Bruce Blackwell of B.A. Blackwell and Associates, a forestry and environmental management services company in North Vancouver, has 30 years’ experience consulting with communities in the aftermath of wildfires.

“After the 2003 fires, which affected Kelowna, I did some policy work for the city: Three people showed up,” he says. “Now I am getting calls from almost all sectors of society — business, government, settler and Indigenous populations. People are concerned about their assets.”

People who experience the fires first-hand don’t need to be told that smoke from the fires is bad for their health, with the elderly and the young particularly vulnerable. Understandably, some people are unwilling to expose themselves, particularly if there’s no end in sight. And there isn’t.

“This is a 40- to 60-year problem, and it’s not going away,” Blackwell says. “We have a landscape that has over a hundred years of effective fire suppression, with immense fuel buildup. More trees creates nutrient and moisture stress, which makes forests vulnerable to disease and the pine beetle. There’s a lot of dead fuel out there, and that dead fuel has a much lower moisture content than living fuel.

“The fires we are seeing are so big the government doesn’t fight them. Instead, it focuses on getting people out of the way.”

But it can be next to impossible to escape the smoke, and impractical to evacuate large urban areas. For those people trapped in large cities, the spectre of living for weeks or even months in a smoke-filled environment can be too much.

“For most of August last year, the air quality in Calgary was terrible,” Fisher says. “My daughter had especially sensitive lungs due to being born three months premature, so taking her out was a really bad idea. Even running errands myself was pretty brutal. My chest hurt all month, and we had no idea how to keep the house safe — the smoke just seeped in.”

“Last year there was another major fire which struck closer to home, and the smoke was so thick that you couldn’t see your neighbour’s house beside you,” Powell says. “Lots of people were wearing masks to ease their breathing. You go from your house, to your car, to the grocery store, and back home again. Even air conditioning doesn’t help, as it just brings the smoke into the house.”

Multi-year weather predictions are near impossible, particularly for such large areas, and it is by no means certain that one year will be worse than the last. But what is clear to the authorities is that climate change is a factor. And, to the extent that the larger issues are not being addressed, it’s reasonable to assume that the long-term hazards associated with wildfires will only increase. For its part, the government in B.C. is looking at climate models to assist with preparedness.

“The BC Wildfire Service is considering more robust analysis that will look at climate change trends over time in B.C., and how they relate to the wildfire threat,” says Dawn Makarowski, a public affairs officer with the province’s Ministry of Forests, Lands, Natural Resource Operations and Rural Development. “This information will be used to guide priority areas for wildfire risk-reduction activities.”

If preparing for the future is a challenge for experts, it is even more difficult — and urgent — for the average Canadian. The social and economic disruption of moving makes for a tough choice, and for those with close ties to the land, whether settler or Indigenous, a permanent move can be out of the question.

And for those who are deciding where to settle, the risk of wildfires is a powerful deterrent.

“You have to consider the possible stress of being on alert, the disruption to your daily life, and the strain on resources and in neighbouring communities,” says Hannah Sutherland, 30, who works in the forestry industry, and who, with her partner, has been looking to purchase land in B.C. “If insurance is unaffordable or becomes unattainable, where does that leave us? If we buy and it burns, or is threatened, what happens to the market price of our asset?”

When one takes into consideration the effects of smoke, and not only the direct threat of fire, the geography affected from wildfires is immense. As a rule, the smoke will tend to move from west to east, with the prevailing winds. Environment Canada has a sophisticated system for alerting people with air quality alerts and smoke predictions. However, in recent years the entire West Coast of the United States and Canada has been affected, with smoke settling on Vancouver and San Francisco.

“I’m thinking I want to give it another year,” says Jasmine Cabanaw, 36, a Canadian from Grafton, Ont., who now lives in San Francisco. “We had smoke in October 2017, then in June 2018, and again in August and November 2018. Those were the big ones, but it’s been bad other times of year, as well. The advice is simply to not go outside without masks, and also to use air purifiers at home.”

Cabanaw, like others interviewed for this article, spoke of the psychological toll, and the stresses on daily life.

“The fires and the smoke changes the society,” she says. “Everyone’s on edge and your eyes burn, even indoors. It affects all areas of your life. When there’s smoke, people just feel really sick all the time.”

Meanwhile, in Canada those provinces most affected by the fires are pouring significant resources into the fight. For the 2019-20 wildfire season, the government of B.C. has budgeted $46.5 million for fire preparedness and $101.1 million for fire management. Alberta has had to allocate an additional $273 million to pay for wildfires and floods in 2018. Exclusive to wildfires, Alberta has base funding of $129.9 million in 2019, with approval for another $250 million.

This represents an astounding outlay of funds, with the wildfire season now accounting for a significant amount of economic activity. In the long run, the economic and social costs will likely rise, not only from the destruction of physical assets, but from people leaving, and from those who have decided that moving into smoke affected areas isn’t worth the risk.

“I love spending time in nature, camping, canoeing, hiking, and working,” Sutherland says. “But the blocking out of the sun and thick haze and smoke is claustrophobic and unhealthy. It's beautiful British Columbia. Sadly, the past few fire seasons have been anything but.”

The elephant in the room is

The elephant in the room is that as a result of advice by consultants hired by the BC governments, Forestry Services refused to do controlled burns years ago, as recommended by people whose lives had been spent in the industry, when it became clear that no other measures would control the bug infestations. They thought they could make good lumber out of it and didn't want to "lose" all that stumpage.
Because of insects, the sawdust itself was extremely flammable ... folks here might remember cases of spontaneous combustion in sawmills ... lives were even lost.
It doesn't really matter whether it was pine beetle or rust or anything else: the infestations spread rapidly when it doesn't get cold enough early enough in the life cycle to stop the high population increases.

Good point. In researching the article, I was also told that that there is resistance to controlled burning near populated areas, due to smoke. The irony is that this only increases the hazard, and makes the fires bigger, with more smoke.