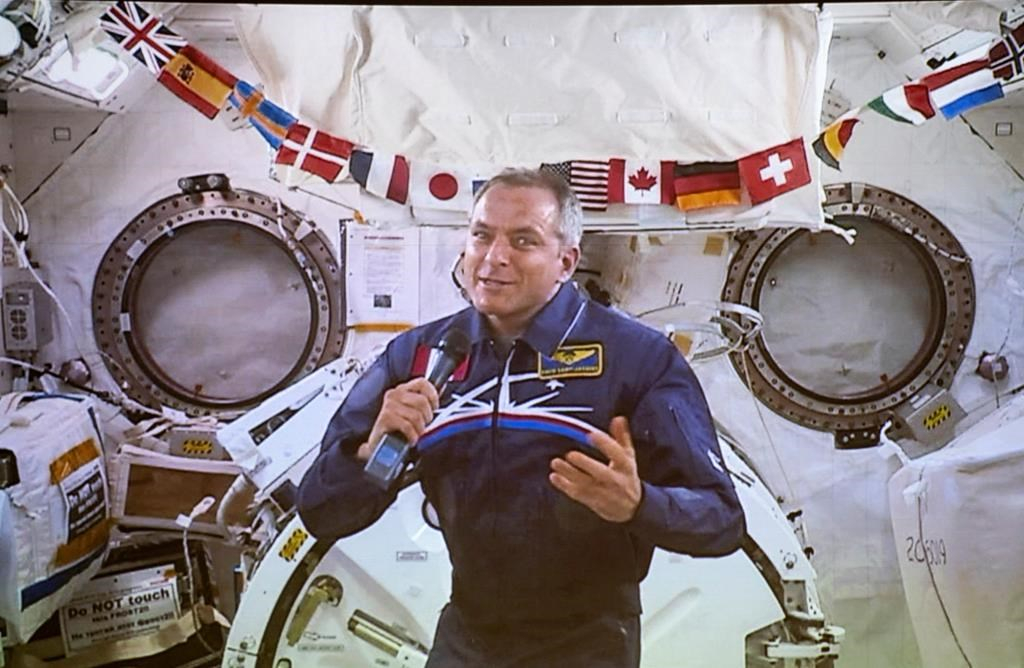 Canadian Space Agency astronaut David Saint-Jacques responds to a question during his last press conference in orbit before returning to Earth on June 24, seen on a giant screen in Saint-Hubert, Que. on June 19, 2019. Photo by The Canadian Press
Previous story
Next story

Canadian astronaut David Saint-Jacques is set to return to Earth in less than a week as his mission aboard the International Space Station comes to an end.

On Day 199 in orbit, Saint-Jacques spoke to reporters Wednesday for the last time before his Monday night return, saying that while a return to gravity will be physically taxing after more than six months in space, he is looking forward to holding his wife and three children.

"When I come back to Earth, I'll need to learn to walk again."

Until then, he will be appreciating the final moments of an incredibly busy experience and preparing for the return aboard a Russian Soyuz capsule.

"What I'm doing for the last few days is really trying to soak it all in, if you want, because I know the day I go back to Earth, I'll have to pinch myself," Saint-Jacques, 49, said.

"I think it will all feel like a dream. I'll be wondering if it all really happened, so I'm trying to burn it into my memory as much as I can."

He was aboard the first manned launch after a rocket failure forced a Soyuz capsule carrying two astronauts to abort and make an emergency landing in October. Russia briefly suspended launches to investigate before giving the mission the all-clear Nov. 1.

The mission for the engineer, astrophysicist and family doctor will clock in as the longest for a Canadian aboard the space station. One of the highlights in orbit was a six-and-a-half hour spacewalk on April 8 — he was the first Canadian to walk in space since David Williams in 2007.

In May, he used the station's Canadarm 2 for a "cosmic catch" of SpaceX Dragon cargo — the first time the feat was performed by a Canadian using the Canadian-built technology aboard the space station.

Saint-Jacques has also performed numerous science experiments while aboard the station and held frequent sessions with young students across the country. In the last one Wednesday, he congratulated winners of a creative writing contest.

"David and the crew of the International Space Station have broken records in terms of productivity, of science in the past weeks," said Gilles Leclerc, the Canadian Space Agency's director of space exploration. He called Saint-Jacques "an excellent ambassador for Canada. He's inspired people of all ages and for us, we look forward to the next mission."

Just the ninth Canadian to head into space, Saint-Jacques said he'll miss the view his perch in space afforded and the camaraderie of fellow astronauts. But there are certain small pleasures of home he'll welcome: feeling fresh air and wind on his face.

"Just walking around a town with lots of people — I'm really looking forward to that," he added. "Around here, it's the same faces — thankfully they're people I like."

The Canadian astronaut posted a video on Tuesday night showing him packing his belongings and erasing his traces for the next crew. While the bulk of his personal items will be sent back via Dragon spacecraft, he said he can take a few keepsakes with him in a small box aboard the Soyuz.

As for another go-around, Saint-Jacques said a second mission is out of his hands.

"It's an astronaut rule — we always say farewell because it's not us who decide, we are here as representatives of our respective countries," Saint-Jacques said.

"And for what the future brings, I don't have a crystal ball, but it was an intense adventure, it is imprinted in my memory and it won't be hard to close my eyes and come back here virtually."