Behind the scenes at Andrew Scheer's backyard climate party 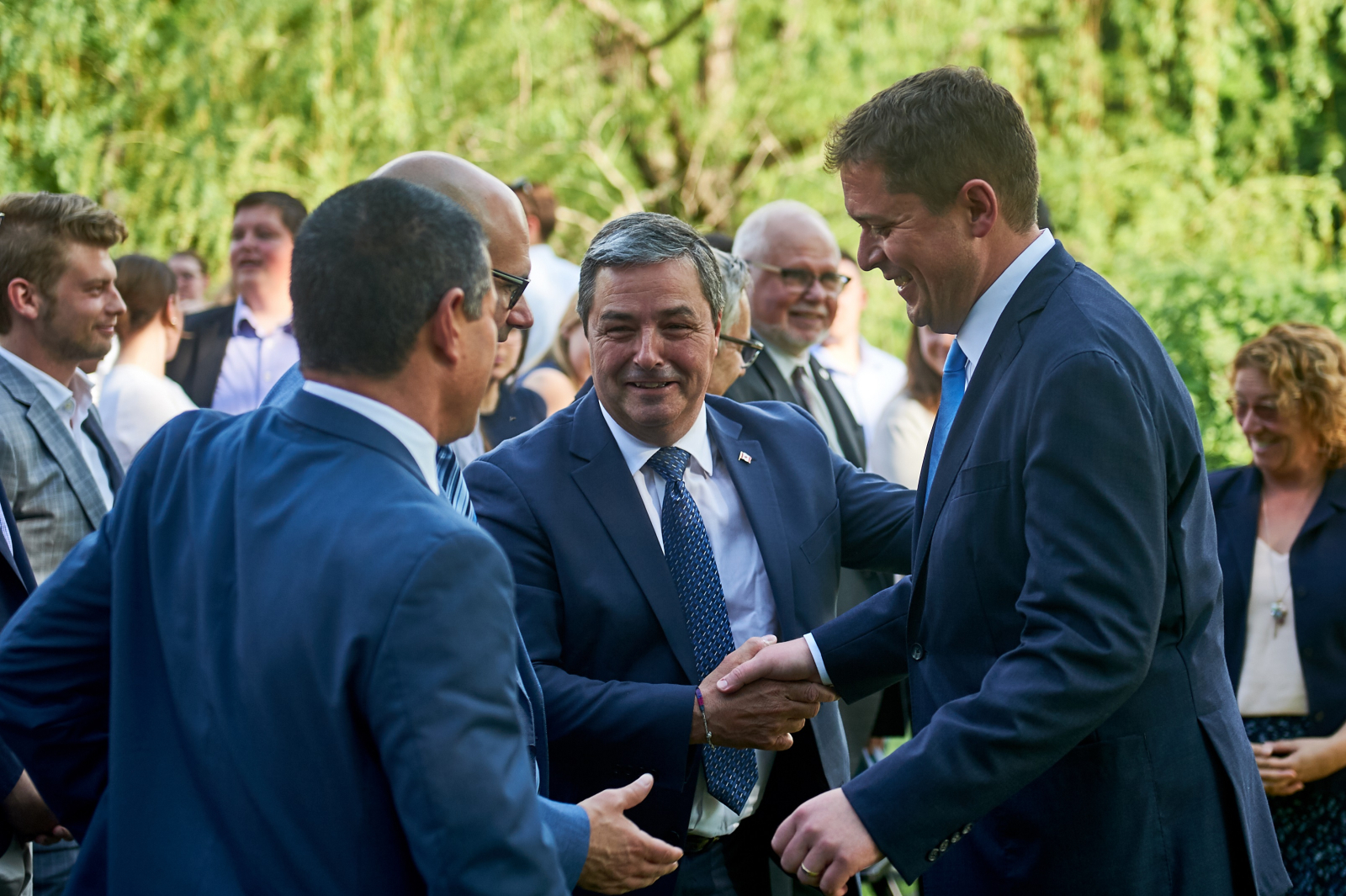 “Thank you for coming, we appreciate it.”

That's how Tom Keeley answered when I asked him if he thought extreme weather was being driven by the climate crisis.

I was standing in the sunny, leafy backyard of Keeley’s home, northwest of Ottawa near picturesque Gatineau Park, on June 19, because Andrew Scheer had summoned me there.

The Conservative leader was highlighting his newly unveiled plan to fight climate change. The party invited national media to the address of a private property in the Gatineau hills in order to hear his speech and ask him questions.

These types of stage-managed events are common in politics. Still, photojournalist Kamara Morozuk and I didn't know quite what to expect. We wanted to peer behind the curtain, to learn who was welcoming Scheer and the media onto their property.

Plus, we were intrigued by what I had discovered online before leaving.

I had searched the address on Canada411 and found Keeley's name. Plugging it into Facebook, I spotted his profile. It had publicly posted photos, one of a home that looked like the one I could see on Google Street View of the address.

That's when I saw another photo that showed Keeley driving a Ferrari, with a graphic underneath that said “I support Andrew Scheer.”

Elections Canada's political-donor database also has someone with the same name and postal code who had made regular donations to the Conservative Party.

'I wanted Andrew to do it up here'

Morozuk and I were late for Scheer's 5 p.m. event after getting stuck in downtown rush-hour traffic. We arrived to find a long line of cars parked on the side of the road, as well as a few shouting protesters holding signs.

“Money won’t be useful when we’re all dying,” one sign read.

We headed to the backyard to find Scheer standing on a small wooden deck overlooking a lake, facing the cameras and a crowd of staffers, MPs and reporters. He was wrapping up his speech and moving to take questions from the media.

As Morozuk began snapping away on her camera, I started to look around. It was a beautiful property, with a swimming pool, barbecue and sprawling patio adorned with comfy chairs and umbrellas.

None of that was visible to the cameras pointed at Scheer. What most of Canada saw that day was Scheer's image, set against the gorgeous natural backdrop of the nearby lake in full summer bloom.

After Scheer had finished with media, the event wrapped up and people started scattering. I asked Scheer’s press secretary, Daniel Schow, where to find the homeowner. He steered me toward the patio, where I was introduced to Ann Marie Keeley.

“Why am I hosting this? Because it’s a beautiful spot, and I’m a Conservative, and I wanted Andrew to do it up here,” she said, when I asked her why we were all gathered in her backyard.

I was confused. How did it actually come about?

“I work for the Conservatives,” she said. “Some of these people have been here before."

It turns out the Keeleys are both proud Conservative Party supporters. Ann Marie is a Tory chief of staff and has been on Parliament Hill since the mid-1990s, according to the Hill Times.

She made that newspaper’s list of “Terrific 25 Staffers” in 2016. She, too, has a photo on her Facebook page with a graphic that says “I support Andrew Scheer.” (Facebook has a function where you can run your profile pic through a filter to add graphics like these.)

Before I could think of another question, Schow came up to us.

“I’m so sorry. Andrew has that thing,” he said to Keeley. “Yeah,” she replied. The two looked at each other. “I don’t know where to get it,” Schow said. “Oh, okay. C’mon,” Keeley said, and they walked into the house.

I then waited on her patio, awkwardly, trying to figure out my next move. Tory MP Robert Sopuck passed me and we said hi. I could see Conservative environment critic Ed Fast on the other side of the patio and I thought about going over to him.

Suddenly, I spotted Tom Keeley. I recognized his face from the Facebook photos. I walked up to him to introduce myself.

“I saw a photo of you in a Ferrari!” I blurted out.

Okay, it probably wasn't the best icebreaker, to be honest. But it was the first thing that came to mind.

He paused to think.

“Oh! That was a long, long time ago, yeah. Yeah, that was a birthday present that day, to do a 20-minute drive,” he said.

'Got everything you need?'

I asked him why the event was at his home. “We’re Conservative supporters, and we were happy to offer the venue,” he responded.

What did he think of Scheer’s climate plan? I asked.

“We’re supporting Andrew and we’re happy to have him at our home, and that’s really the extent of it.”

Then I asked him if he believed climate change is caused by humans.

I was curious to see what a guy who was hosting the Official Opposition leader and national media at an event on his property might have to say about the planet's most urgent issue.

He said he didn’t want to do an interview. I tried another angle. How about extreme weather? Did he think that’s caused by climate change?

“Thank you for coming, we appreciate it,” he said, walking away.

You have no comments on any of this? I pressed. I was still hoping for a longer conversation.

“Beyond, 'Thank you for coming to our home,' I’ve got no further comments.”

I finally took the hint.

As I collected myself, Scheer’s director of communications, Brock Harrison, walked up to me.

“Got everything you need?” he asked, giving me an inquisitive look.

In the end, the Keeleys' backyard got positive reviews in the Tory fold.

Big surprise. Unveil a major platform, and hear nothing but crickets when you ask a question.

Scheer’s climate plan: was it worth the wait?