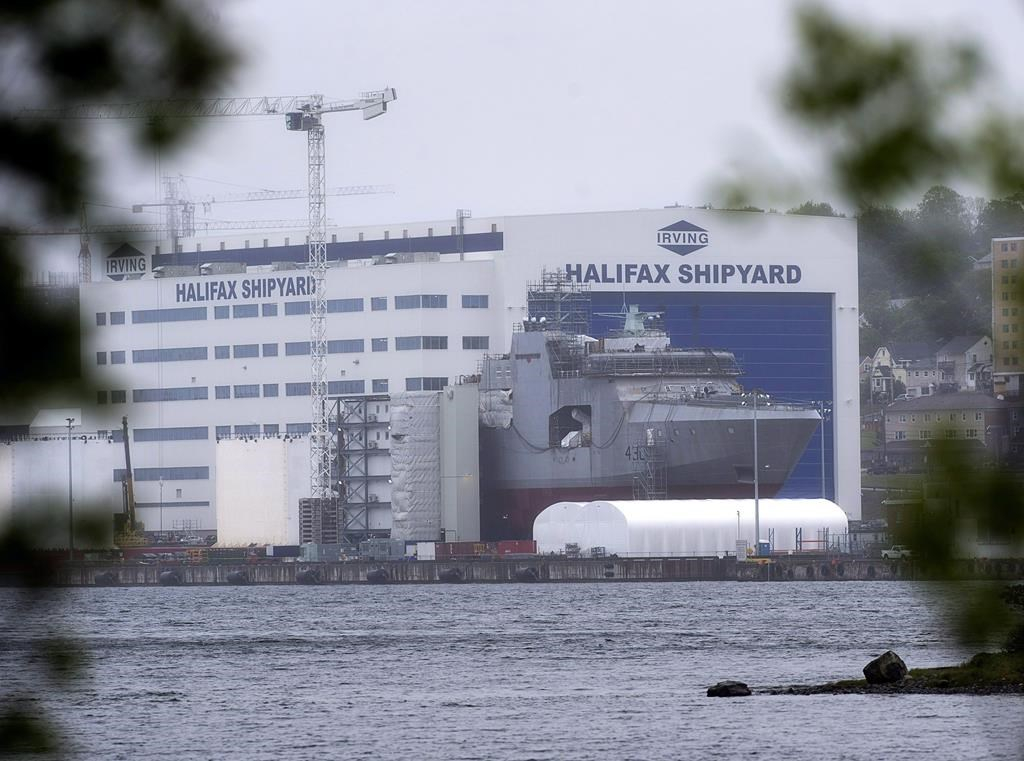 The Irving Shipbuilding facility is seen in Halifax on Thursday, June 14, 2018. File photo by The Canadian Press/Andrew Vaughan
Previous story

Canada's 15 new warships will cost almost $70 billion over the next quarter-century, according to Parliament's budget watchdog, and the cost could change further depending on the final design of the ships and when they actually get built.

The estimate, released in a report by the parliamentary budget office Friday, is up substantially from a Canadian government estimate in 2017 that pegged the price of the project at between $56 billion and $60 billion. The 2017 estimate was itself a revision of the project's original $26-billion price tag.

Also in 2017, the PBO estimated the total cost of the ships to be $61.8 billion, but its report released Friday updates that to reflect the design of the ships — frigates known as "Type 26" — which wasn't known at the time. It also accounts for delays in the project.

The Canadian government will now pay out $69.8 billion over 26 years, the PBO estimates.

In a statement released shortly after the PBO report, the Department of National Defence said it remained "confident" in its 2017 estimate, and that the "vast majority" of the difference between the estimates came from the PBO's choice to include taxes in its projections.

Taking away taxes brings the two estimates to within 10 per cent of each other, the DND said.

But the department conceded that any small difference means hundreds of millions of dollars in costs for taxpayers.

The PBO report says the difference in the estimates is due to a later start date for construction and a heavier ship design.

The report assumes ships will start being built by the 2023-2024 fiscal year, three years later than its 2017 projection. As the timeline extends into the future, costs increase due to inflation.

The PBO originally projected a displacement, or weight, of 5,400 tonnes for each ship but the Type 26 design is a heftier 6,790 tonnes per ship, an increase of more than 25 per cent.

The report also includes an analysis of what effect further significant delays would have on the project. For a one-year delay, the PBO estimates, an extra $2.2 billion will be added to the project cost, and a two-year delay would cost the government $4.5 billion.

In an interview Friday, the top bureaucrat in charge of procurement at the DND expressed skepticism that the heavier ships will result in as much increased cost as the PBO suggests, but he did say the potential for delays was something he is "watching more carefully."

"The labour piece is always where uncertainty can remain," said Pat Finn, the department's associate deputy minister for material, noting labour can make up around 40 per cent of the cost of a ship.

Finn said the DND is in the "same place" as the PBO on the cost of "slippage" — delays in the project — but that he is confident the structure of the National Shipbuilding Strategy will mean the project could benefit from a skilled workforce and ongoing expertise.

The purchase of additional Arctic patrol ships, announced last month, means there will not be a lapse in efficiency at Irving's Halifax shipyard, which is building the warships, Finn said.

He set a goal for start of construction earlier than the PBO assumes in its report.

Potential delays would certainly increase costs, and it would be "absolutely no shock if there was additional delays," said Dave Perry, a procurement expert with the Canadian Global Affairs Institute.

"To this point in time, the government has not been able to meet any of the timelines that have been put forward publicly," he added.

Still, the closer you get to construction, Perry said, the less uncertainty there should be about costs and the potential for further delay.

The last thing that might change the final cost of the ships is the specifics of what components are chosen to fill out the design — which radar equipment, for example, Perry said.

The DND is deciding on those components as it reconciles the requirements of the ships with costs.

"You could potentially get a few-percentage-point swing" in price in either direction based on those choices, said Perry.

"But if you're talking about several tens of billions of dollars, a few-percentage-points swing is real money."

Legal challenge filed over high-stakes competition to design $60B warships