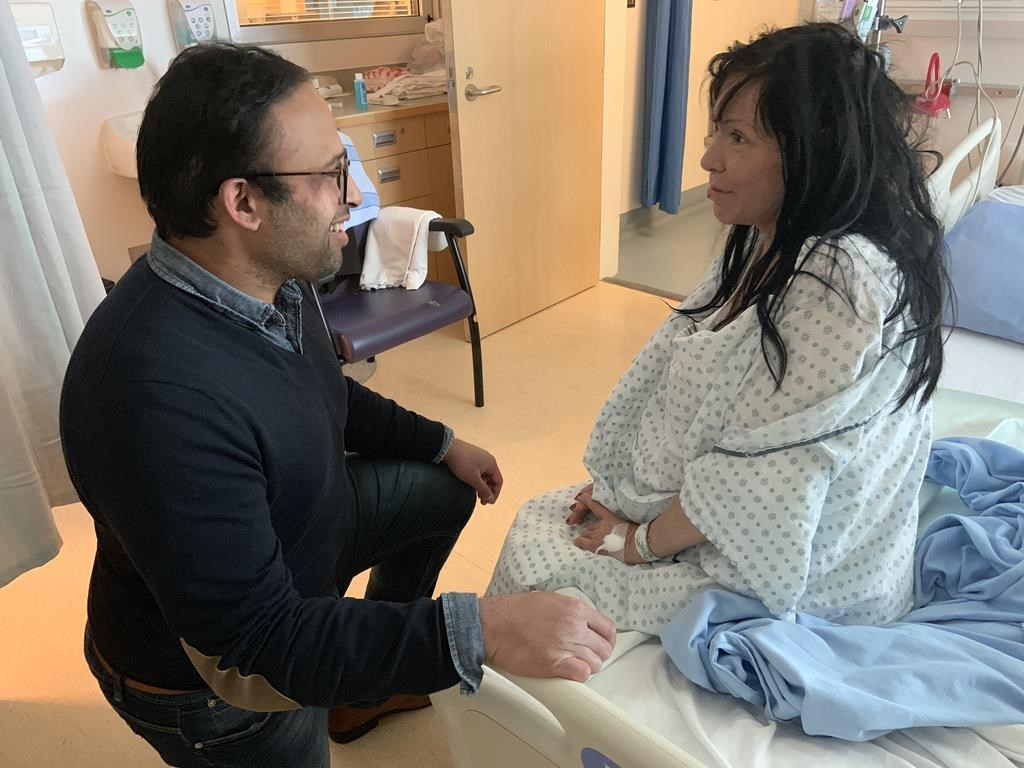 Dr. Monty Ghosh, an addictions and internal medicine specialist at the University of Alberta, speaks with a patient in Calgary on Thursday, June 20, 2019, in this handout photo. Handout photo by Dan Grover
Previous story
Next story

Now, throw in hepatitis C, a blood-borne virus that can cause serious liver problems and is several times more prevalent in federal prisons than the general population.

A specialist in addictions and internal medicine who focuses on vulnerable populations has launched a pilot program in Calgary to ensure recently released inmates with a history of injection drug use are screened and treated for the virus.

"It takes a lot of willpower and effort on their end to come out of this. And if we don't provide them with enough support, they're not going to be able to," says Monty Ghosh, a University of Alberta professor who splits his time between Edmonton and Calgary.

The program connects newly released prisoners with so-called peer navigators who have lived through similar experiences. The navigators accompany the former inmates to medical, legal and social services appointments — interactions that many avoid for fear of judgment or because more pressing issues are at hand.

"Clients often tell me that they're confused about resources in the community. They don't know where to go or how to get there sometimes. They have very little money to take a bus to get to where they need to be," says Ghosh.

"Sometimes they have to decide between food and lining up to get into the shelter versus actually making their medical appointment."

In a best-case scenario, Gosh says, it can take five months to clear the body of the hepatitis C virus. Usually, it's more like nine or 10 months. There are numerous blood tests and followups a patient must go through over that time.

"We find that every time we add another step, clients fall off. But if you add a peer navigator, they make it to each and every one of those steps at a high, high rate."

The program, which began in April, aims to reach 120 clients in its first year and have 80 per cent of them follow through with their treatment to the end. Ghosh says about 40 per cent of incarcerated people usually complete the treatment.

The initiative is funded with $46,000 through what pharmaceutical company Gilead Sciences Canada calls a "micro-elimination" grant. The grants are meant to help organizations combat hepatitis C in the most affected groups.

"We recognize that it will take more than just science to eliminate the burden of (hepatitis C) on patients, our health system and Canadian society as a whole," says Gilead general manager Kennet Brysting.

The Correctional Service of Canada says hepatitis C rates in federal prisons dropped to just under eight per cent in 2017 from 32 per cent in 2007. In the general population, fewer than one per cent of people have hepatitis C.

Spokeswoman Stephanie Stevenson says 80 per cent of federal inmates with the virus are diagnosed before incarceration or at intake. The rates are higher than the general population because there is often a history of high-risk behaviour, such as injection drug use or unprotected sex, she says. The virus can also be spread through snorting drugs or getting a tattoo.

The head of the John Howard Society of Canada, a group that advocates for an "effective, just and humane" criminal justice system, says inmates are sometimes released without a provincial health-care card and only a few weeks worth of medication.

"If they're going into a halfway house or going into a parole situation, those with whom they're staying will go to great lengths to try and make sure that their health-care needs are being met," Catherine Latimer says.

"But it's often challenging."