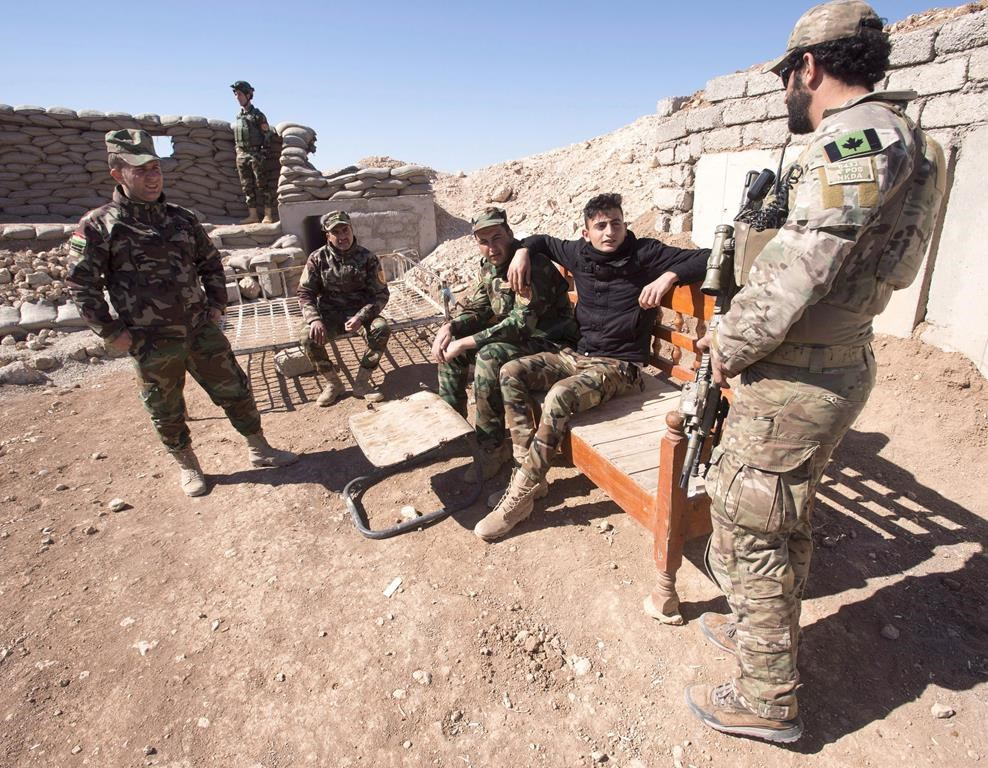 Canada is being invited to once again provide training to Iraq's Kurdish security forces, who worked shoulder-to-shoulder with Canadian soldiers in the war against the Islamic State group before being frozen out in 2017.

Bayan Sami Abdul Rahman, Iraqi Kurdistan's top diplomat in Washington, insisted her people don't harbour any ill will toward Canada for suspending and later ending years of military assistance to the Kurdish military, called the peshmerga.

Yet with the Kurdish government working on a major reform of the peshmerga to ensure they are better able defend the region from ISIL and various other threats, Abdul Rahman said Canadian assistance would be welcome.

"We are committed to it because we recognize that Kurdistan needs a professional, national, unified military," she said. "This reform program is long term ... Canada could play a role in many aspects of that reform program."

The decision to end assistance to the peshmerga followed an outbreak of violence between Kurdish and Iraqi government forces in October 2017 over control of oil-rich territory in the north of the country liberated from the Islamic State of Iraq and the Levant.

Prior to that, Canadian special forces had for three years trained and advised the Kurds in the defence of their semi-independent region from ISIL before working together to free large swathes of territory from ISIL's grasp.

The federal Liberals recently extended Canada's military mission in Iraq through 2021, with much of the focus on training Iraqi military forces through NATO and other partnerships.

With ISIL no longer a direct threat to the Kurds, "it's understandable that some coalition partners have shifted their focus," Abdul Rahman said in an interview during a recent visit to Ottawa. "So there's no resentment or anything like that."

Abdul Rahman also indicated the peshmerga would still like millions of dollars in promised Canadian weapons, which have been stuck in limbo since assistance was suspended. She acknowledged they likely won't be delivered.

And she hopes Canada will follow other countries in upgrading its diplomatic office in the Kurdish capital of Erbil as part of a broader expansion of ties with the region.

Whether Canada helps the peshmerga or continues working with Iraqi government forces, Abdul Rahman said the priority is that it remains engaged in Iraq as the country remains extremely fragile despite ISIL's military defeat last year.

There has been a tendency by the international community over the years to leave Iraq to its own devices after helping deal with a major crisis, she said, without addressing the root causes of the crisis.

Such a scenario played out after the U.S. and its allies withdrew from Iraq in 2011, which Abdul Rahman says contributed to ISIL's rise as various fissures inside the country were left to fester.

"When Iraq is in crisis and there's something big going on, then there's attention," she said.

"Then whatever the problem was is kind of fixed. Not completely, but it's patched up, and then Iraq will muddle through. But muddle through with a ton of problems that are bubbling away under the surface."

Those problems are numerous right now, Abdul Rahman said, with ISIL insurgents prowling the country or languishing with their families in internment camps while more than 1.5 million people remain in refugee camps.

Ethnic and religious rivalries also continue to cause problems even as foreign countries try to exert their influence and many Iraqis have expressed frustration with the slow pace of reconstruction, which has manifested itself in protests.

Canada has provided foreign aid to help alleviate some of those problems, including the provision of services for refugees and internally-displaced people, which Abdul Rahman said was welcome.

But she suggested more is needed from the international community writ large, such as programs to support the children of ISIL fighters, many of whom remain stuck in camps with little hope for the future and run the risk of being radicalized.

"There isn't a program that I'm aware of to at least look at the children," she said.

"It's things like that that I don't think are being addressed, neither by the UN or the international coalition nor by national partners who are committed to the enduring defeat of (ISIL). Well, the enduring defeat also means looking at the ideology."