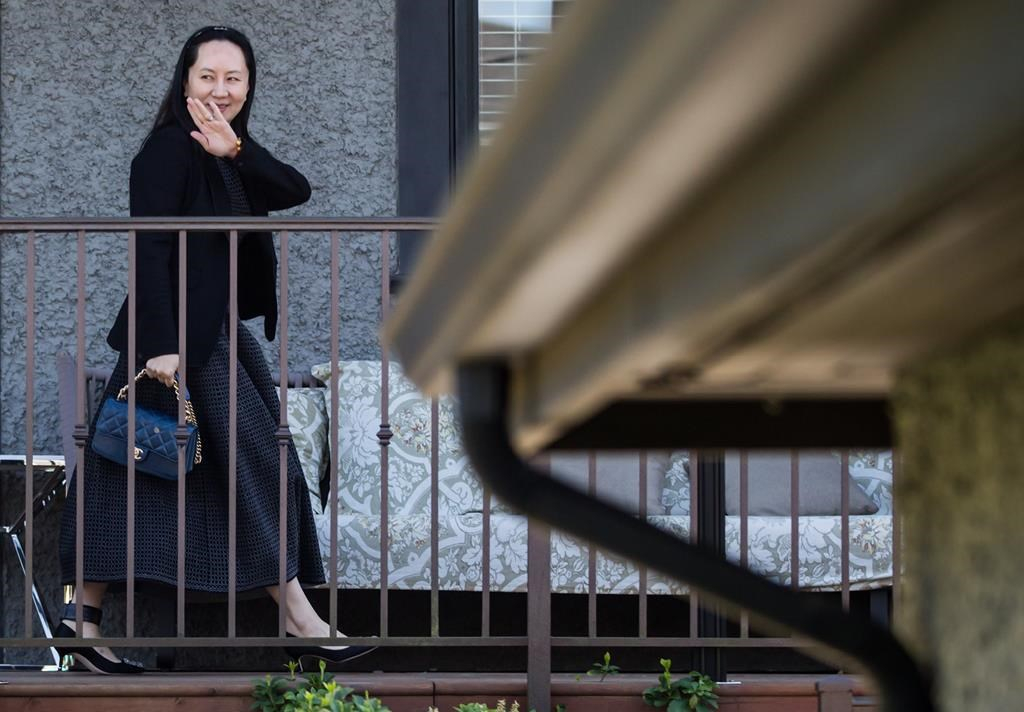 Defence lawyers for a senior Huawei executive have asked Canada's foreign affairs minister to stop the extradition process against their client, saying the request made by the United States was for political purposes, not legitimate law enforcement reasons.

Meng Wanzhou's lawyers say in a statement they decided to deliver written submissions to Chrystia Freeland following former prime minister Jean Chretien's comments that withdrawing extradition proceedings would improve relations with China and win the release of two Canadians being held there.

Freeland has rejected Chretien's view, which was reported in the Globe and Mail based on anonymous sources, saying heeding to external pressure in a single case would set a dangerous precedent that could make Canadians less safe around the world.

In the statement released Monday, Meng's lawyers say Canada is at a "crossroads" regarding the United States' request to extradite Meng to face a fraud trial for alleged conduct that would not be an offence in Canada.

Meng was arrested at Vancouver's airport last December and a B.C. Supreme Court judge has accepted her defence team's plan for the start of an extradition hearing in January, which would conclude in about 16 months.

The U.S. Department of Justice laid charges of conspiracy, fraud and obstruction of justice against Meng and Huawei, alleging they misled a bank about Huawei's ownership of a subsidiary called Skycom in an effort to circumvent U.S. sanctions against Iran.

Both Meng and Huawei have denied any wrongdoing.

Her defence team says the extradition proceedings are unprecedented.

"What is most glaring about the extradition request is that the conduct alleged against Ms. Meng could never ground a criminal prosecution in Canada," the lawyers say in the statement.

"Canada does not police the conduct of foreign persons in foreign lands that have nothing to do with Canada."

They say all the allegations relevant to the extradition request occurred in Hong Kong, involving Meng, a foreign national, and a foreign bank.

"None of the conduct occurred in the United States or Canada. No alleged victim resided in Canada. No aspect of any fact violated any Canadian law."

The statement from Meng's legal team says the United States has stood alone since May 2018 in maintaining strict sanction laws against Iran, which neither Canada nor any of its allies support.

Meng remains under house arrest at one of her two Vancouver homes and has filed a separate civil lawsuit against the RCMP and the Canada Border Services Agency.

Both have denied officers searched her electronic devices at the airport in Vancouver, saying border officials only examined Meng and her luggage for immigration and customs purposes.

Relations between China and Canada have been strained since Canadians Michael Kovrig and Michael Spavor were detained by Beijing last December for alleged spying after Meng was arrested.

Freeland has maintained Meng's arrest is lawful and her rights are being protected while rebuffing China's demands to free her.

Meng may well have commited

Meng may well have commited the "sins" that Washington, DC is pinning on her. It would be consistent with Chinese foreign policy objectives and the stranglehold the Communist leadership has with respect to its "private enterprises".

Unfortunately, the Canadian-U.S. convention about acting to aid each other's criminal prosecutions seems to require us to collude with this questionable U.S. initiative. It is the first substantive chance for the US to give China a taste of it's own habits of holding foreigners hostage to its geopolitical objectives.

Also unfortunate that this current administration is so consumed with tit-for-tat foreign relationships and its abysmal failures to show real leadership in international affairs that it is resorting to schoolyard bully tactics. Lo! how the once mighty are fallen!

Actually Minister Freeland would be well advised to wash her hands of the entire debacle, deport Ms. Meng back to Hong Kong, declare her persona non grata, until the US case against her has been resolved judicially or diplomatically. Hong Kong may well not appreciate having this particular hot potato landed on them, nor may Huawei be happy about having Ms. Meng and her company now wholly at the mercy of the Communist leadership (however loudly that leadership complains about her detention)

She has been detained here

She has been detained here for over six months; this is far too long. At present she can anticipate years of detention, once time for appeals is allowed for. The legal system needs to be changed so that a resolution takes no more than two weeks.