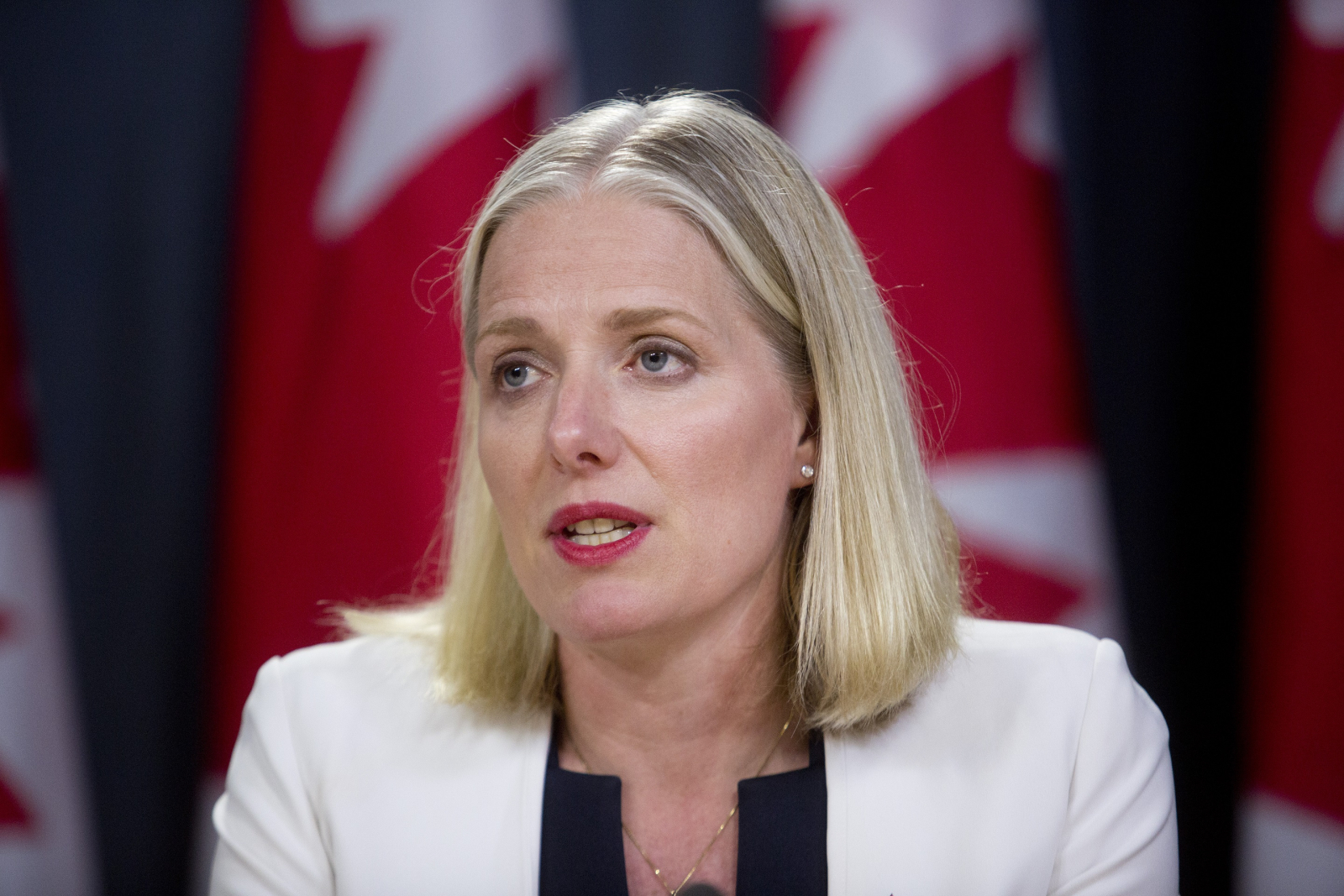 The Liberal government is setting aside $60 million in federal carbon-tax revenue to fix schools in four provinces whose conservative premiers oppose the tax.

But Environment and Climate Change Minister Catherine McKenna still has to sell those premiers on the idea.

Already, New Brunswick ⁠— one of the four provinces, along with Ontario, Saskatchewan, and Manitoba, where Ottawa has imposed its own carbon-pricing regime for lack of a provincial system it deemed acceptable ⁠— is saying it didn’t have enough time to discuss the program with McKenna before she revealed details on Tuesday.

The funding would come from the 10 per cent portion of this year's fossil fuel tax revenue that won’t be rebated to Canadians via their tax returns. The Liberal government has long said that a tenth of the proceeds would go toward schools, hospitals, small businesses and other groups.

“This is money from a price on pollution that we have committed to reinvesting in the provinces, where the premiers made a decision to make it free to pollute,” McKenna said during an announcement Tuesday at McNabb Park in her riding of Ottawa Centre, where she was joined by Ottawa-Vanier Liberal MP Mona Fortier.

'He would have appreciated more discussion'

McKenna's announcement is the latest salvo in a war that has been raging in the media, courts and election campaigns since the 2015 federal campaign, with Prime Minister Justin Trudeau’s Liberals on one side and conservative, anti-carbon tax provincial governments on the other.

The minister said she has sent letters to the four provinces informing them of how she plans to spend the carbon money.

Because education is a provincial responsibility and school boards are funded via provincial budgets, the Liberals’ plan can’t proceed without signoff from the premiers.

A representative for New Brunswick Environment Minister Jeff Carr said the province was not properly consulted.

"While Minister Carr acknowledges the importance of investing in green infrastructure, he would have appreciated more discussion with the federal minister in advance of her announcement," wrote Anne Mooers, communications director for New Brunswick’s Department of Environment and Local Government, in an emailed response to questions.

Mooers said Carr hadn't had an opportunity to review the letter, sent to him Tuesday, but was looking forward to speaking with McKenna in Halifax on Wednesday at a meeting of environment ministers.

An Ontario official speaking on background said the province had only recently received the letter from McKenna, and would need to review its contents before proceeding.

Meanwhile, an official for the Manitoba government said "the province looks forward to working with the federal government to build on initiatives to reduce emissions and lower the energy-related costs within our schools."

Ontario challenged Ottawa over its carbon tax on constitutional grounds. In May, the Saskatchewan Court of Appeal validated that carbon pricing falls "within the legislative authority of Parliament.”

New Brunswick proposed a carbon tax of its own two weeks ago, CBC News reported, that would cover 0.84 per cent of its heaviest polluters, a fraction of the 20 per cent captured by the federal system.

This month, the Manitoba government lowered its carbon-pollution reduction ambitions, saying that after removing a carbon tax from the equation, it had revised down how much pollution it could eliminate.

The $60 million for 2019-20 is being divided according to which jurisdiction the revenue came from. Ontario will get a $41-million share of the pie.

Of the rest, $12 million will go to Saskatchewan, $5 million to Manitoba and $2 million to New Brunswick. McKenna said “almost 6,000 schools will be eligible” across the four provinces.

The funding would ideally be used for “more energy-efficient windows, better lighting (and) better heating and cooling systems,” she said. This would improve students’ “learning environment” and help schools save money, McKenna argued.

“This is money that can be used to retrofit, to make schools more energy-efficient. How great would it be to see solar panels on every school?” she said.

Government officials portrayed the announcement Tuesday as the first of many under what they call the Climate Action Incentive Fund. Details of proposed funding for other groups will follow, they indicated.

“What we need is an agreement with the provinces,” said McKenna, “so that we can flow this money to make a big difference for schools. We’re hopeful that provinces will recognize that this is a good thing.”

On Tuesday, Alberta’s right-leaning premier, Jason Kenney, announced the province had filed a notice of intervention to join Saskatchewan in challenging the federal carbon tax at the Supreme Court of Canada.

Kenney has now abandoned his province’s price on pollution, although Alberta is not included in McKenna’s list of eligible regions because the federal government says its backstop won’t kick in there until January 2020.

McKenna said the government wasn’t looking for matching funds from the provinces. She gave New Brunswick as an example of a province that has sometimes been hesitant to commit because it doesn’t want to put up matching funds.

“In this case, we’re just saying, what we need is your co-operation, because you work directly with school boards,” she said.

Schools and school boards interested in participating in the program outlined by McKenna “are encouraged to contact their provincial governments for more details on how to apply," reads the minister's news release.