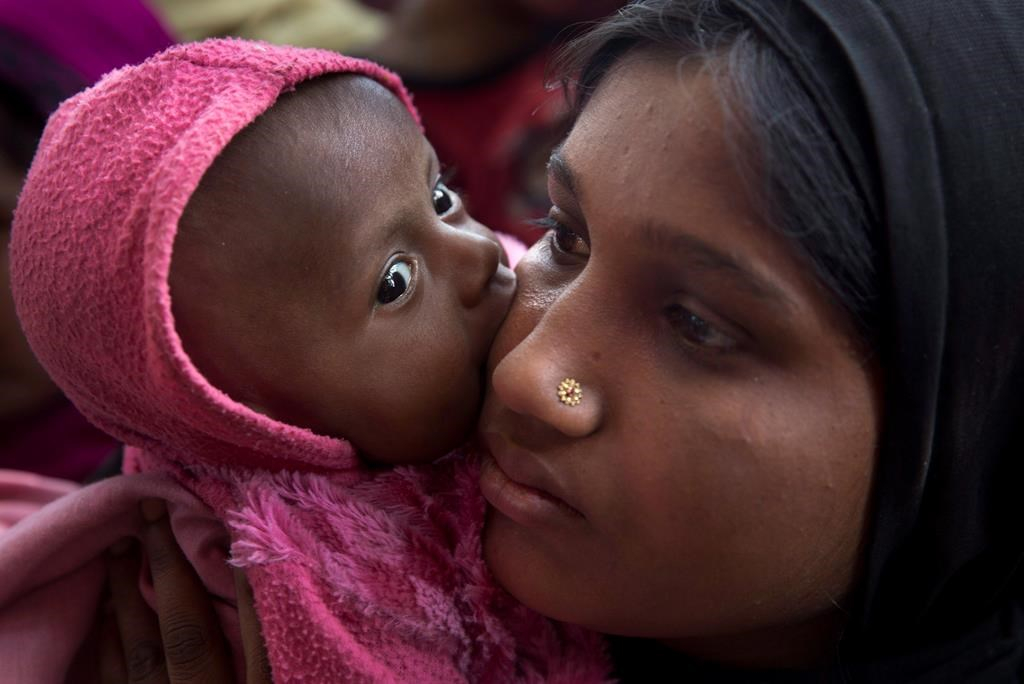 A newly arrived Rohingya refugee child licks the cheek of her mother Azida Khatoon, 20, as they wait in a food distribution line in the Kutupalong refugee camp near Cox's Bazar, Bangladesh on Jan. 27, 2018. File photo by The Associated Press/Manish Swarup
Previous story
Next story

The Trudeau government is facing mounting pressure from across the country to take more international action to hold Myanmar to account for the genocide of the Rohingya people.

Thirty-four senators — a third of the Senate — and more than 100 human-rights organizations and advocates sent a joint letter to Foreign Affairs Minister Chrystia Freeland this week urging Canada to initiate proceedings before the International Court of Justice for breaching the United Nations convention against genocide. The court deals with disputes between states.

In September 2018, Canada became the first country in the world to officially recognize the violence perpetrated against the Rohingya by Myanmar's security forces as genocide. Canada also stripped Myanmar's de facto leader, Aung Sun Suu Kyi, of her honorary Canadian citizenship over her inaction on the violence in her country.

But branding the situation a genocide carries with it an international legal obligation to intervene, potentially with force, which is why the push is now on to see Canada take this next step.

"As concerned parliamentarians and members of civil society, we strongly believe that those responsible for the genocide against the Rohingya must be held to account by the international community," the letter says.

"We firmly believe that Canada is in a position to exercise strong and effective global leadership in response to the genocide by pursing this matter before the International Court of Justice."

This letter follows several similar letters that have also been sent to Freeland and Justice Minister David Lametti in recent weeks, including one from an all-party group of MPs who also called for Canada to take international legal action.

In addition, Toronto and Montreal city councils have passed unanimous motions and several other Canadian mayors and rights organizations have sent their own letters to Freeland urging Canada to seek justice for the mass killing and atrocities perpetrated against the Rohingya people in Myanmar.

Last year, the UN human-rights council released a report on its fact-finding mission on three states in Myanmar documenting the systematic targeting of civilian Rohingya by the military, including mass gang rape, sexual slavery and the razing of hundreds of villages.

This followed a report by Canada's special envoy to Myanmar, Bob Rae, who urged Canada to take a leadership role in the humanitarian crisis — but focused more on calling for increased spending on the migration crisis in the region.

The violence has led nearly 725,000 Rohingya to flee the country into neighbouring Bangladesh.

In a statement on Thursday, Freeland's deputy press secretary Marie-Pier Baril said the government believes those responsible for the atrocities against the Rohingya Muslims must face justice, noting that Canada has sanctioned key military commanders.

But rather than initiating the process independently, Canada has called on the UN Security Council to refer the situation faced by the Rohingya to the International Criminal Court, which handles charges against individuals of genocide, war crimes and crimes against humanity.

"Canada will continue to lead international efforts to support the Rohingya's basic needs, to exert pressure on the Myanmar government and to bring justice to the Rohingya for all they have suffered," Baril said.

"We will continue to work closely with like-minded partners to explore all avenues for holding perpetrators to account, including through the International Court of Justice."

Canada is also providing more than $300 million in humanitarian aid for this crisis, including to aid partners in Bangladesh.

"As Canadians, as human beings, it's our moral responsibility to act, to lift the Rohingya out of the despair and hopelessness that many of them feel because of what they have endured," Khan said during a recent press conference in Ottawa.