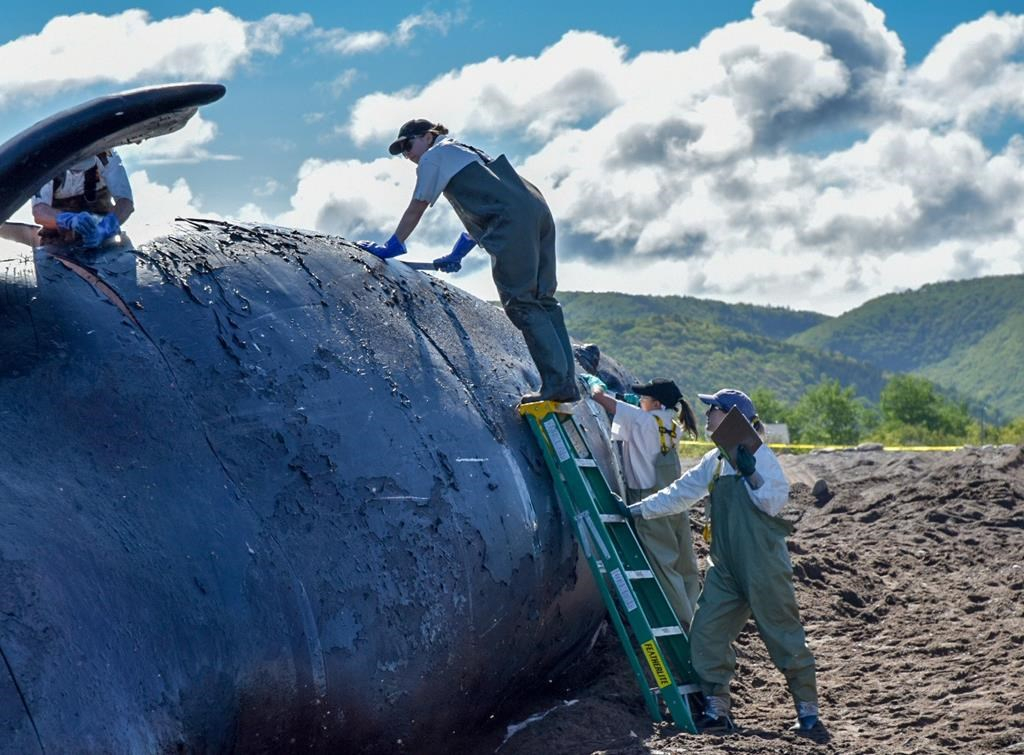 Fisheries and Oceans Canada says it has sighted another dead endangered right whale drifting off the Gaspé Peninsula, bringing the total number of deaths in Canadian waters this year to six.

The government was still assessing recovery and necropsy options for this sixth whale.

The new information late Thursday came as an expert said Canadian officials did not respond quickly enough to this year's migration of North Atlantic right whales.

Laurie Murison, executive director of the Grand Manan Whale and Seabird Research Station, said while vessel speed limits, fishing restrictions and other measures are now in place, they should have come sooner.

"They have reacted now, but it is something that needs to be in place at the beginning of every season. You need to look at what's going on and what the distribution is," she said in an interview Thursday.

Murison said it was clear from Gulf of St. Lawrence surveillance flights that the whales were travelling further to the east this year than in the past two years.

"The whales are going to go to wherever the best food resources are. They can vary from year to year and we don't have a long term database for right whales in the Gulf," she said.

Necropsy results show at least one of the dead whales had injuries consistent with a vessel strike.

Fisheries and Oceans Canada (DFO) confirmed late Wednesday that a right whale was found dead on the shores of Anticosti Island near the Gulf of St. Lawrence.

In a statement, officials said scientists are on scene collecting samples for analysis, and working with various partners to assess necropsy options.

During a news conference Thursday, Isabelle Elliott, a marine mammal response officer with Fisheries and Oceans, said the age and identity of the fifth whale was not yet known.

She said the first whale was a nine-year-old male named Wolverine and necropsy results were inconclusive.

The second dead whale was a 40-year-old female known as Punctuation, and her injuries were consistent with a vessel strike.

A necropsy was scheduled for Friday in Norway, P.E.I., on the third whale — a 34-year-old male named Comet.

Elliott said the name of the fourth whale, an 11-year-old female, was not yet available. She said the carcass was too decomposed to allow for a necropsy.

DFO officials said that as of Thursday 16,000 square kilometres in the Gulf are closed to fishing, based on confirmed right whale sightings since April 28. The snow crab fishery will close in the southern Gulf as of this Sunday.

He added the speed restriction is an interim measure.

However, the government will issue a fine of up to $25,000 to those who fail to follow the speed limit, Garneau said.

On Thursday, Michelle Sanders, director of clean water policy for Transport Canada, was asked why the speed restrictions weren't in place earlier.

She said wider speed restrictions actually began April 28, but there were exclusions within the shipping zones because data over the last two years showed no whales in those areas, and the speed limits would be imposed as soon as any whales were spotted.

"A similar approach has been taken this year and unfortunately we're in the situation we are in. We are analyzing the data to determine what if any changes need to be made to those measures," Sanders said.

Murison says when you are trying to protect a population that is close to extinction, you need to act quickly and not assume last year's measures will work this year.

However, Murison said she was pleased that mitigation measures have been taken.

"The speed reduction now is good and hopefully it will prevent any more deaths," she said.

Officials said the five dead whales were spread over the region, with no common pattern.

Patrick Ramage, director of marine conservation for the International Fund For Animal Welfare, issued a statement from Washington, saying immediate action is needed to address all the causes of right whale mortality — from ship strikes to entanglements.

"While we commend the Minister of Transport for swiftly enacting speed restrictions for vessels 65 feet or greater in length in waters where the whales are present, more needs to be done in Canada and the United States to prioritize the survival of the North Atlantic right whale," he wrote.

It's estimated there are only about 410 of the whales left, but Murison said she believes the real number is now below 400 because there are some that die each year whose carcasses are never found.

"The prediction is extinction if this continues and not in the long term, but rather in the short term," she said.