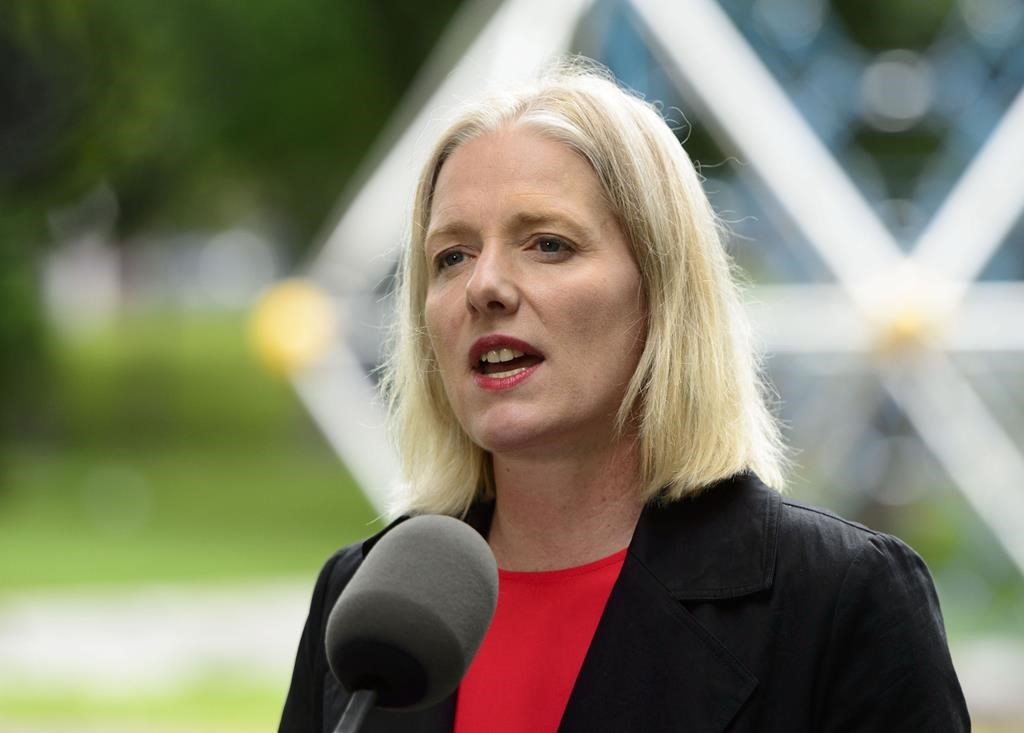 Catherine McKenna makes an announcement on how the federal government will allocate a portion of the proceeds collected as a result of carbon pollution pricing during a press conference in Ottawa on June 25, 2019. File photo by The Canadian Press
Previous story
Next story

Jeff Carr expressed frustration at Ottawa’s handling of the issue on Thursday, after speaking with Environment and Climate Change Minister Catherine McKenna on the sidelines of a meeting of provincial environment ministers in Halifax.

“There’s no reason to take our money, at all, and just repackage it and give it back to us, and tell us how to spend it,” he told National Observer in a phone interview after the meeting. “We’re big boys and girls. We know how to spend our money, and we know what it should be spent on when it comes to energy efficiency.”

The meeting of the Canadian Council of Ministers of the Environment also produced an action plan to harmonize recycling and plastic-waste reduction, although details have yet to emerge.

McKenna announced Tuesday she is setting aside $60 million from this year’s fossil fuel tax revenue to spend on energy-efficiency upgrades at schools in four provinces — Ontario, Saskatchewan, Manitoba and New Brunswick — that Ottawa says have failed to meet national standards and so must partake in the federal carbon-pricing regime.

The money represents a slice of revenues derived from carbon pricing that the federal government has long indicated wouldn’t be directly rebated to Canadians via their tax returns -- as will happen with 90 per cent of the levy’s proceeds — but instead redirected into green projects in schools, hospitals, small businesses and other areas.

The school portion is part of this smaller envelope of revenues collected in the four provinces.

The four governments have to sign off on a plan to spend the money for schools, since education is a provincial responsibility. Ottawa is giving the provinces until July 19 to communicate their plans. McKenna said she had sent letters to the four provinces about the offer, and was hopeful they would sign agreements.

In a phone interview following the meeting, Carr said he had unsuccessfully pressed McKenna for details on how the money would be distributed.

“It was pretty clear that she either didn’t have an interest, or didn’t know what the timelines were going forward, or which pieces or sectors we could spend the money on — if it does come,” he said. “I don’t see where she has a plan going forward, other than election drips of money-spending announcements.”

Carr said schools in New Brunswick have a long list of pressing repairs, and if the money being offered is restricted to energy-efficiency upgrades, it could mean important fixes could be overlooked.

“Some of these window and heating upgrades may take precedence now over a leaky roof, if we want to be able to use our own money the way she’s telling us to use it.”

McKenna acknowledged to reporters in a teleconference call Thursday that she had addressed the issue of the $60-million offer “on the margins of the meeting,” and that “there were some questions about what the money could be used for.”

She said she was clear to provincial ministers that the portion being allocated for schools is for energy-efficiency measures, to “reduce their carbon footprint, but also to save money that can be reinvested in students.”

“We’ve heard across the board that schools are very interested — and of course we see students marching in the streets, and they certainly want to be part of the solution, and are expecting leadership from people around our table,” McKenna said.

“We were just notifying them, and asking them to work for us. This will be rolled out over time. But we just think it’s a great opportunity.”

The $60 million isn’t being divided equally: McKenna said Ontario would get $41 million, Saskatchewan would get $12 million, Manitoba would get $5 million and New Brunswick would get $2 million.

Carr said he wasn’t sure why the province wasn’t being offered more money up front. He said he had calculated that the $2 million allocated to his province represented less than the 10 per cent slice that the government was promising.

But federal officials speaking on background noted the $2 million doesn’t represent the full 10-per-cent slice on its own, as other money is expected to be distributed in future to other initiatives, like small businesses and Indigenous groups.

The government estimates the portion of carbon-tax revenue earmarked for small business, for example, will come to represent $1.4 billion over five years, which means $55 million for New Brunswick — and $975 million for Ontario, $295 million for Saskatchewan and $130 million for Manitoba.

“Unfortunately, New Brunswick is one of the provinces that didn’t step up to put a price on pollution. So we’re in this situation of having to ask,” McKenna told reporters.

“And we know we don’t have a lot of time. We need to be making sure that we’re taking serious action on climate change.”

'A nine-per-cent recycling rate is abysmal'

At the council meeting, The Canadian Press reported, McKenna said the governments agree there should be consistent standards and targets for companies that produce plastic waste or use it to package their products.

The document is written in very general language, however, with the earliest goals for achieving the various targets being December 2020 and most extending to December 2021.

Canada only recycles about nine per cent of the plastic it produces. According to a recent report prepared for Environment and Climate Change Canada by Deloitte and ChemInfo Services, in 2016 Canadians threw out 3.3 million tonnes of plastic, 12 times more than was recycled.

"A nine-per-cent recycling rate is abysmal," McKenna said ahead of the meeting.

There are a limited number of recycling facilities in Canada, and a lack of standards for plastic packaging makes it difficult to recycle many items. Different dyes or glues used in labels can make recycling impossible, for example.

The Deloitte report also noted it is still cheaper and easier to produce and use new plastic than it is to recycle and use recycled plastics. The report recommended setting standards to require packaging materials and other products to use a set amount of recycled material to create new demand that would propel growth in the domestic recycling industry.

Prime Minister Justin Trudeau announced earlier this month that Canada was looking at banning a number of single-use plastic items within the next two years, including Styrofoam take-out containers, plastic straws and cutlery.

The only premiers and

The only premiers and governments that complain about getting money are conservative ones. Swallow your spite and take it for your public. Shut up and stop complaining. Getting so sick of stupid politicians like these that dupe people.

They must have just got out

They must have just got out of their big-kids-now diapers; otherwise, how on earth did the schools get into such a state of disrepair? Surely, it must be someone else's fault.