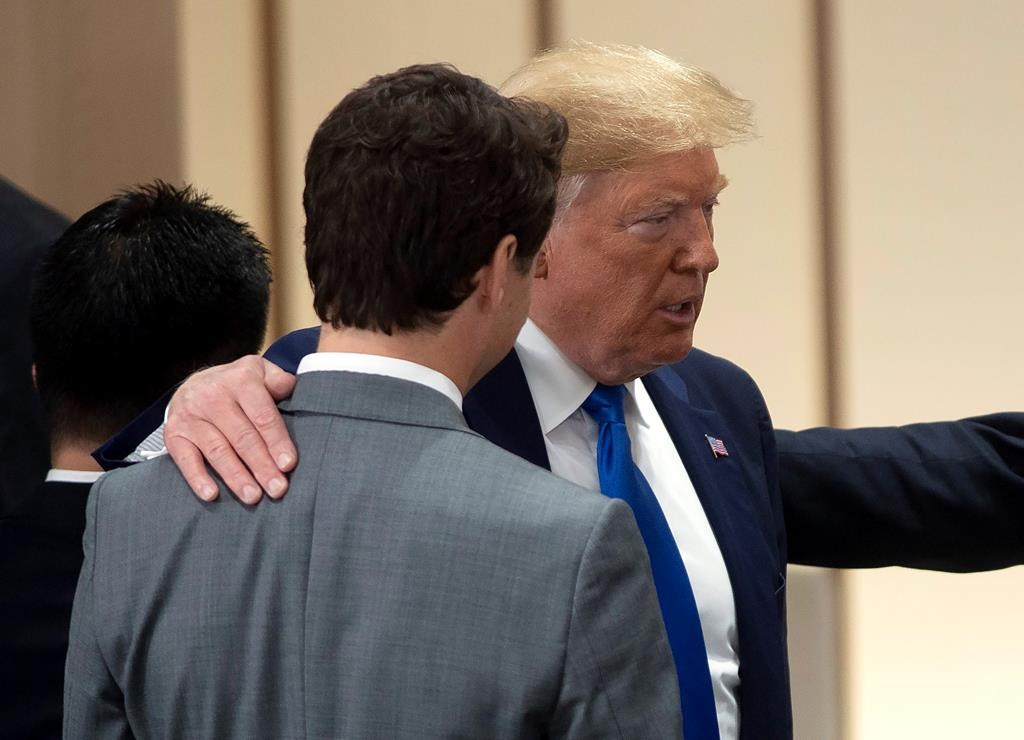 United States President Donald Trump puts his hand on Canadian Prime Minister Justin Trudeau's shoulder as they talk before the start of a plenary session at the G20 Summit in Osaka, Japan, on Saturday, June 29, 2019. Photo by The Canadian Press
Previous story
Next story

The issue of two Canadians detained in China was raised in discussions with the Chinese president at the G20 summit in Osaka, Prime Minister Justin Trudeau said Saturday.

Canada and China are going through a "challenging moment" right now, Trudeau said in his summit closing press conference, adding that direct conversations are key to moving forward.

"I think it was important that I have an opportunity to have face-to-face discussions with President Xi on this issue," Trudeau told reporters.

"We take the situation of the two Canadians detained in China extremely seriously and it was important we have those exchanges."

The prime minister did not have a formal bilateral meeting with Chinese President Xi at the summit of leaders from major economies but the Prime Minister's Office (PMO) says there were "constructive interactions" between the two leaders.

One of the Canadian government's strategies at the G20 was to rally for heightened support from other countries on the issue of the detentions Michael Kovrig and Michael Spavor.

On Friday, the PMO said it received "broad support" from European partners on the matter when Trudeau sat down with them.

Trudeau also said Saturday that he was "confident" the issue was raised during a bilateral meeting between U.S. President Donald Trump and Xi — a highly-anticipated discussion on trade.

Last week while meeting with Trudeau in the Oval Office ahead of the G20, the president made a public pledge to do "anything" to help Canada on the detentions.

"Many of our allies around the world have been highlighting the situation of the two Canadians detained in China and we are confident that the president also brought that up but you'll have to ask him for details," Trudeau said.

But in his own post G20 press conference, Trump didn't mention the detentions of Kovrig and Spavor.

He said he and the Chinese president did not talk about Meng Wanzhou— Huawei's chief financial officer who was arrested in Vancouver on a U.S. extradition warrant on Dec. 1.

Meng's arrest created diplomatic waves between Canada and China and Spavor and Kovrig were taken into custody that month in arrests deemed "arbitrary" by the Canadian government.

Huawei would have to be the last issue discussed in trade talks with China, Trump added.

A central point of friction between the U.S. and China right now is the decision by the Americans to deem Huawei as "incompatible" with its security interests and that of its allies.

In remarks made at the beginning of his meeting with the Chinese president, Trump said America and China are getting "a little bit closer" to reaching a trade agreement.

The president also said he and the Chinese president have spent a lot of time together, noting they have "become friends."

Trump said he looks forward to working with China and that the U.S. wants to do something that will "even it up" with respect to trade, noting it is "actually very easy to do."

"I actually think that we were very close and then ... something happened where it slipped a little bit," Trump said. "Now we're getting a little bit closer, but it would be historic if we could do a fair trade deal."