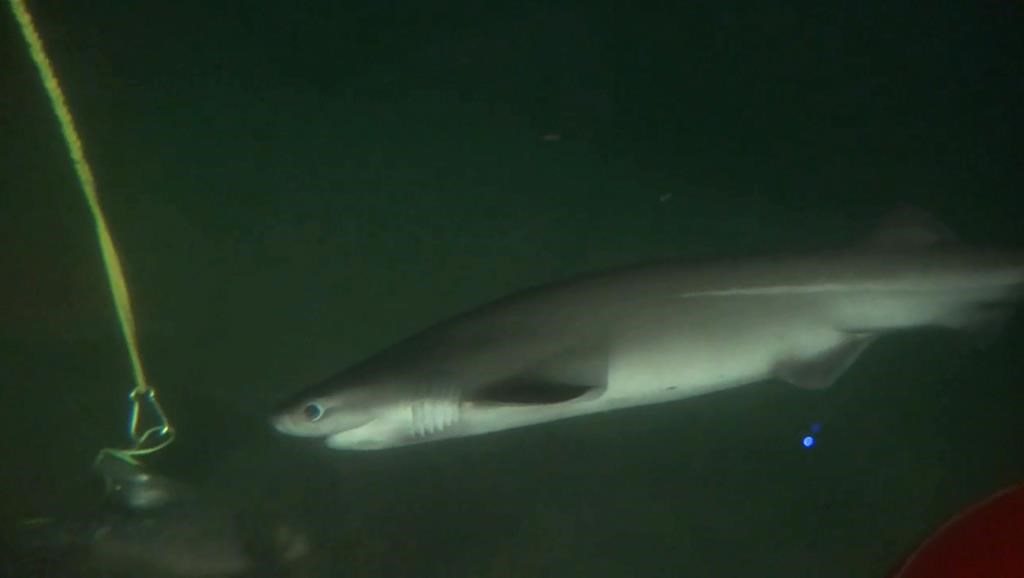 A juvenile sixgill shark swims in waters one kilometre off the coast of West Vancouver and 100 metres below the surface in a still image made from a September 2017 handout video clip. Handout photo by Chris Harvey-Clark
Previous story

A rare encounter with several juvenile bluntnose sixgill sharks in waters off Vancouver implies the population may be larger than previously thought, says a marine biologist.

Chris Harvey-Clark of Dalhousie University was part of a team of researchers who used a small submarine to explore the waters about a kilometre off the coast and about 100 metres below the surface.

He said they were surprised to see three juvenile sixgills, in part because the population was thought to have been reduced significantly by an experimental fishery that operated in the 1990s.

"Over all the years I've been doing this, since the 1970s, I've only seen maybe two or three juveniles. I think that's what made the experience off downtown Vancouver so amazing," he said in an interview.

"In thousands of dives I've done, I've only seen two or three juvenile sixgills. And all of a sudden, bang, in a very short period of time, you see three. To me, that was the dramatic moment that this sub dive led to."

Harvey-Clark, who is also a veterinarian, wrote about the September 2017 discovery in a paper published last month in Sea Technology.

He said it's also unusual to see juvenile sixgills, which are about one to two metres long, because the cannibalistic nature of sharks means that the younger, smaller animals are often forced to hide in deeper waters.

"Juveniles of this species are rarely found at that size. It's a highly cannibalistic species. If a big one finds a little one, they just eat it," Harvey-Clark said.

"These juveniles, almost neonatal sharks, are probably using depth as a way to segregate from other adults of their species who would eat them if they could find them."

The slow-growing, but long-lived species of shark is typically found in waters up to 2,000 metres deep and grows to five or six metres.

The researchers put out bait of oily fish but the sharks also appeared to be very attracted to the metal parts of the sub. Because they're a deep-sea shark, they detect prey based on microvolt amounts of current the bottom fish are putting out, he explained.

He said it was also interesting to see that there was a lot of food for sixgills at a depth of only 100 metres.

"There was lots of dogfish, lots of ratfish, tons and tons of squid species that we don't really see much of in shallow water in that part of Vancouver," he said.

"The whole thing was illuminating about the whole life that goes on beneath the surface right off a densely populated city centre. People swimming off the beaches of Vancouver would never imagine the sharks out there."

But he doesn't think swimmers should be too nervous about the creatures taking a bite out of them.

"You don't want to ever say that about something that gets this big. These sharks get to be a huge size. They eat everything. They have a giant mouth and saw teeth," he added.

"But there have been many, many diver encounters with this species and nobody's ever really had an aggressive encounter with a sixgill."

He said they're a slow-moving, relatively sedentary bottom-feeding species, and their favourite food is stuff that's already dead.

"If you want to see a sixgill really get active, some salmon offal on the bottom ... That's really what they're after."

Shark fin ban sets an example for the world

By The Canadian Press | News, Politics | October 14th 2018
State Of The Animal