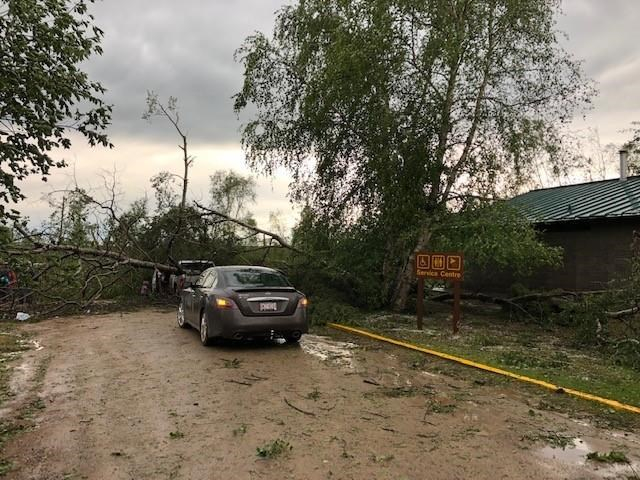 Fallen trees block vehicles from getting through a route at the Murray Doell Campground, in Meadow Lake Provincial Park, Sask., in a Saturday, June 29, 2019, handout photo. Handout photo by Evan Purves
Previous story

A windstorm that may have been a tornado snapped trees and caused numerous injuries at a Saskatchewan provincial park that was full of campers who were enjoying the Canada Day long weekend.

The Saskatchewan government said three people were injured and a hiker was missing after a storm hit Meadow Lake Provincial Park in the province's northwest on Saturday, although officials said Sunday afternoon that the hiker has since been accounted for.

Billington said the three people who were injured were expected to survive, and said campers evacuated from the affected campgrounds were at a local emergency shelter where they have access to food, water and first aid.

John Purves, mayor of the nearby community of Goodsoil, said he got a call from his son who was at the campground and arrived there to help before emergency crews. He said he had to hike in because the roads were blocked with trees.

Purves said so many trees were down that he could see two nearby lakes, which normally aren't visible from the campground.

"You could see campers with trees on them, tents smashed down, boats totally folded because of big trees coming down on top of them. No roads that were accessible at all," Purves said. "It was a pretty chaotic scene."

Meteorologist and Environment Canada spokesman Dan Kulak said he can't confirm if it was a tornado or just extremely strong winds that caused the damage in Meadow Lake.

He said Environment Canada is calling the incident a "severe weather event" for now, and the weather agency is sending a weather team to the park to investigate.

Donald Achanga, who was camping with his family in the park, told the meadowlakeNow website that the wind hit suddenly and that he and his family used a picnic table to shelter themselves from marble-sized hail.

He said a woman was trapped in her camper, and rescuers had to saw a hole in the roof to free her.

"Trees with like a 30-inch diameter folded over like nothing," Achanga said. "It was beautiful and then suddenly there was nothing there. … Everything was just folded right over."

The province warned people in the area to be cautious, noting SaskPower switched off electricity and has been patrolling its lines to assess damage.

It said Sask Parks, meanwhile, is in the process of identifying trailers, boats, campers, and personal property that can be successfully removed from Murray Doell Campground.

"Those on the ground have done an incredible job in the last 24 hours, pulling together to immediately and effectively respond. On behalf of the province, thank you," Moe said Sunday.

Purves said the campground was evacuated after the storm, and the community hall in Goodsoil was opened up for the displaced campers. Residents of the village brought food and blankets, and even opened their homes for the night.

Fire departments, he said, came from Meadow Lake in the southeast, and Cold Lake, Alberta, to assist.

"The whole northeast side of Alberta and northwest side of Saskatchewan really pulled together on this one," Purves said.

Storm keeps Trudeau from landing in Iqaluit for apology to Inuit