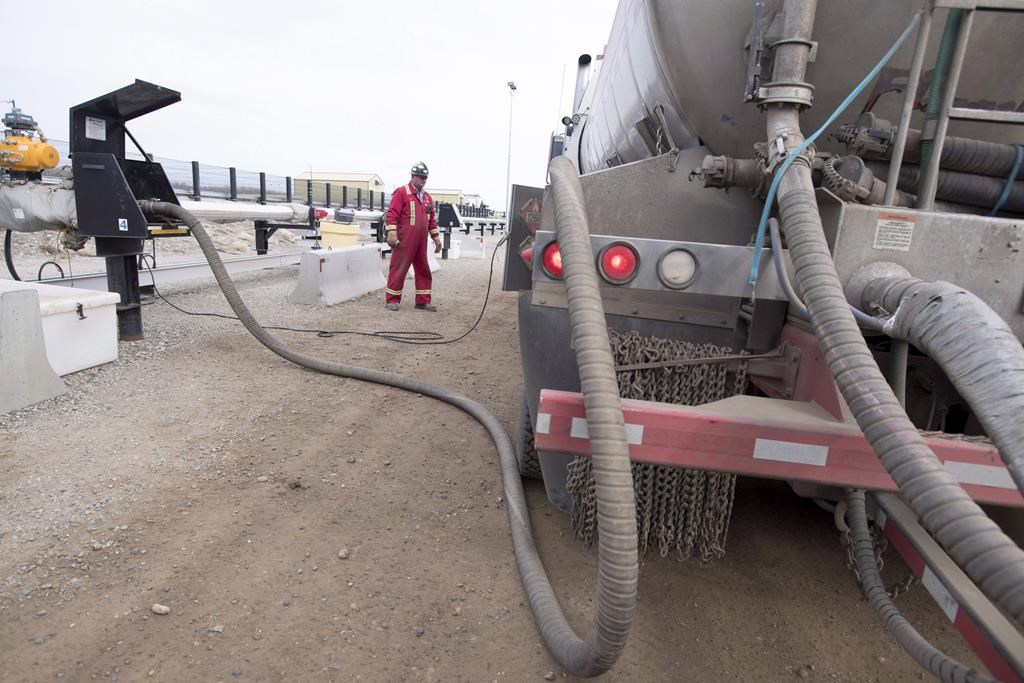 A worker fills his truck at the Shell Sunset water hub for the Groundbirch Saturn natural gas plant outside of Fort St. John, B.C., on Thursday, Oct. 11, 2018. File photo by The Canadian Press/Jonathan Hayward
Previous story
Next story

The Global Energy Monitor says an international boom in liquefied natural gas exports is undermining global efforts to stop climate change and Canada is one of the industry's biggest players.

The report, released on Canada Day, says there are projects in development globally that by 2030 would increase natural gas supply to 806 million tonnes above what they are now.

Just over one-third of that development, 35 per cent, is in Canada. Only the United States, at 39 per cent, has more new natural gas exports in the works, the report says.

The Global Energy Monitor is an international non-governmental organization that catalogues fossil-fuel infrastructure.

The report says the increase in natural gas is driven largely by the North American fracking boom, which changed the industry about 11 years ago.

But it also says the investments are "on a collision course" with the goals of the Paris climate change accord.

That accord, signed by every country in the world, commits to trying to keep global warming to as close to 1.5 C as possible compared to pre-industrial levels. As of 2016, the world was close to hitting the 1 C warming mark, and last year, the United Nations Intergovernmental Panel on Climate Change said the world will blow past 1.5 C by 2040 without drastic action to cut global greenhouse gas emissions.

A 1.5 C goal would require a global cut in natural gas of 15 per cent by 2030 and 43 per cent by 2050. If all the current proposed projects are built, natural gas supply will instead triple by 2030, the Global Energy Monitor says.

Natural gas, which emits about half the greenhouse gases as coal when burned, has been put up as an alternative to produce electricity with fewer emissions. But the report says the fugitive release of methane — such as small leaks — at all stages of gas extraction and delivery contradicts that idea.

Methane is a more potent greenhouse gas than carbon dioxide, with about 30 times the warming effect. Methane is also the main component of natural gas and is responsible for one-quarter of the global warming the world has seen to date.

"Even today, there's still talk of natural gas a bridge towards renewables, which is completely contrary to the facts," said Ted Nace, executive director of the Global Energy Monitor.

Ontario, which phased out its coal-fired generators as of 2014, did so by adding new gas generators as well as nuclear and renewable sources. Several plants in Alberta are being converted to natural gas over the next three years.

The federal Liberals are moving to discourage the construction of new natural gas plants, issuing regulations last week to increase the carbon tax on any new plants added after 2021. But the government is heavily supportive of exporting natural gas to Asia.

Natural Resources Canada says 18 LNG projects are proposed in Canada, 13 in British Columbia, two in Quebec and three in Nova Scotia. The federal government just announced a $220 million contribution to the LNG Canada project in Kitimat, B.C., to help fund energy-efficient gas turbines as part of the $40 billion project.

The government also points to the economic benefits of the plants, noting a 2016 report by the Conference Board of Canada that said developing 30 million tonnes of LNG per year in British Columbia would add $7.4 billion a year to the Canadian economy and 65,000 new jobs over three decades.

The federal Conservatives are looking to use Canadian LNG exports to meet Canada's commitments on cutting emissions.

Isabelle Turcotte, federal policy director at the Pembina Institute, said the idea that natural gas is a solution for climate change is "a fallacy."