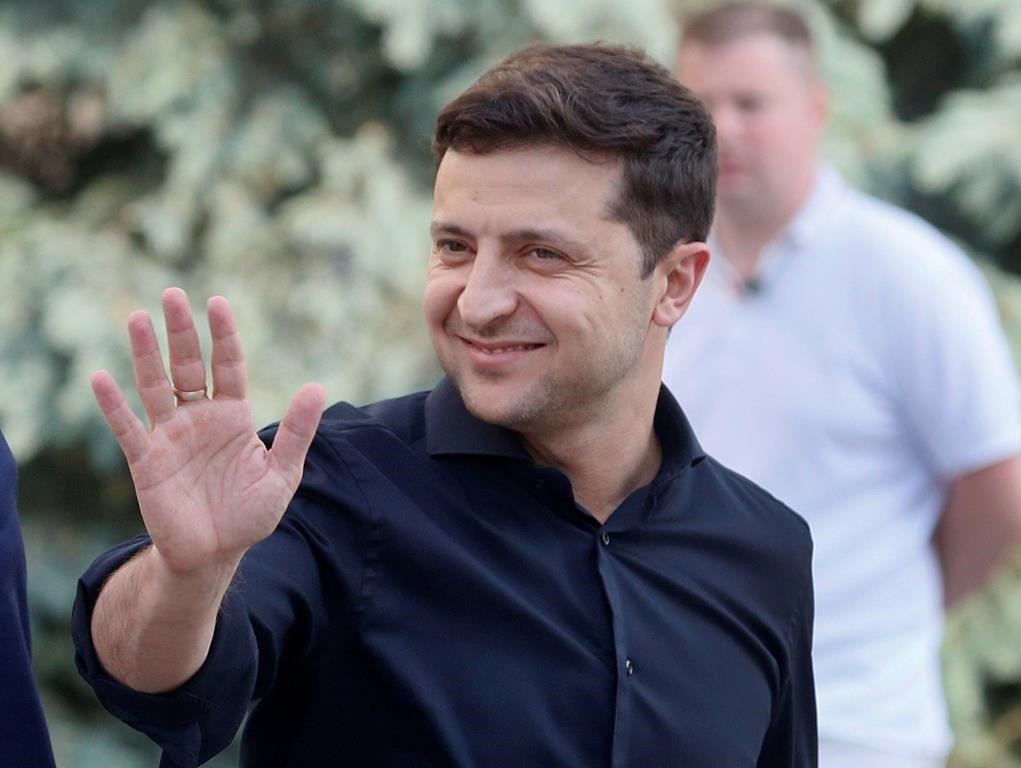 Ukraine's new president makes his North American debut in Toronto later today — more than a month before he is to visit the United States — and the country's envoy says that's no mistake.

Andriy Shevchenko, Ukraine's ambassador to Canada, says that's an indication of just how important President Volodymyr Zelenskiy sees the ties between the two countries that have grown in the last 28 years.

Zelenskiy, a popular actor and comedian with no previous political experience, is to meet Prime Minister Justin Trudeau at a major international conference on his future that opens today, and that Canada is hosting.

Zelenskiy easily won this spring's presidential election, unseating Petro Poroshenko, and sparking concern about whether someone who played the Ukrainian president in a fictional TV drama was cut out for the actual job.

But Zelenskiy has worked quickly, dissolving his country's parliament and pushing forward with new elections for that assembly later this month, a timeline that was months ahead of its previous schedule.

It will help Zelenskiy set his agenda for his term in office, which includes fending off ongoing threats from Russia, said Shevchenko.

In 2014, Russia annexed Ukraine's Crimean Peninsula in the worst breach of Europe's borders since the Second World War, an act Canada and its Western allies view as illegal. Russia has also fomented a pro-Kremlin insurgency in the country's east that has left more than 13,000 dead.

In November, Russia detained 24 Ukrainian sailors and seized three ships in the Kerch Strait, which connects the Sea of Azov and the Black Sea off the Crimean coast. Last month, a United Nations maritime tribunal said Russia must free the sailors and their ships. Russia says the tribunal has no jurisdiction over it.

"The president will ask Canada to support our fight for the sailors imprisoned by Russian after the incident in Kerch," said Shevchenko.

Canada became the first Western country to recognize Ukraine's independence in 1991 after the fall of the Soviet Union.

Canada has supplied Ukraine with $785 million worth of military, legal, financial, development and political assistance since 2014 when President Vladimir Putin tried to bring the country back into Russia's sphere of influence just as Ukraine was poised to deepen its integration with the European Union.

Trudeau's office has said he and Zelenskiy will discuss Ukraine's reform efforts and its path toward integration with Europe.

Canadian is also home to 1.3 million people of Ukrainian descent, which makes it one of the country's most influential diaspora communities, which has big domestic political implications with the October federal election looming.

Foreign Affairs Minister Chrystia Freeland's own Ukrainian heritage has helped keep the country near the top of her agenda.

She is hosting the conference and is to give a major speech.

Freeland was one of the first Western politicians to visit Zelenskiy in Kyiv after he was declared the victor of the presidential race last month.

Canada has offered Zelenskiy's officials training in how to actually run a government because they lack experience and are running a country whose institutions are not as strong as those in the West.