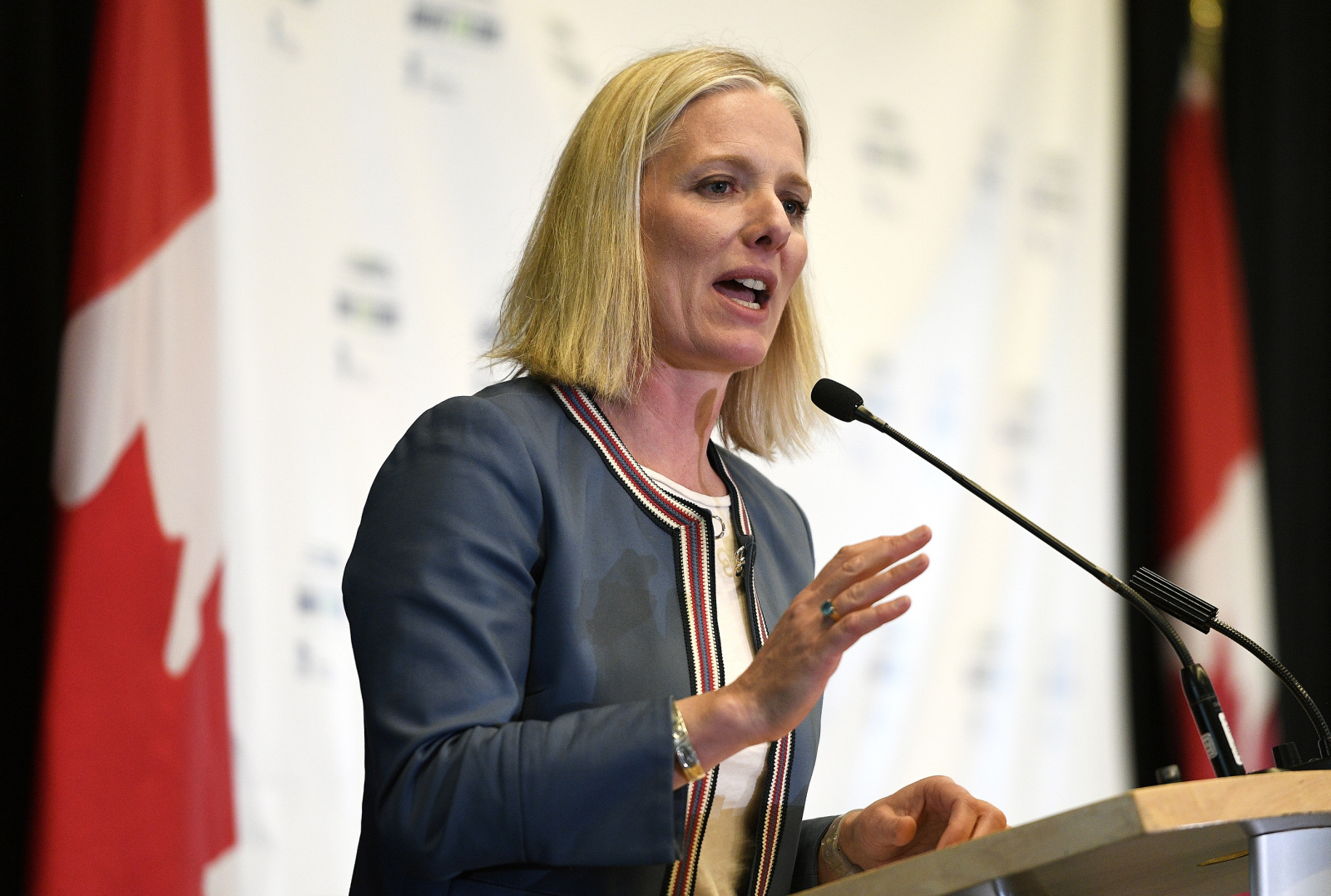 Environment and Climate Change Minister Catherine McKenna speaks at the Drive to Zero workshop during the Clean Energy Ministerial in Vancouver on May 28, 2019. Photo by Jennifer Gauthier
Previous story
Next story

Canada's electricity industry lobby group says it was left out of the federal government's decision to crack down on carbon pollution from new power plants that use natural gas.

The comments came after Canada's wind energy lobby group applauded the government last week for updating its rules to subject larger portions of pollution from new natural gas plants to the federal carbon pricing system in 2021 and beyond.

The decision is part of the Trudeau government’s Output-Based Pricing System, which allows heavy industry like cement factories, steel mills and oil and gas mining to pay the carbon price on only a portion of their pollution, saving them from the full impact of competition from foreign-based operations that are not subject to the levy.

In a statement Tuesday, the Canadian Electricity Association (CEA) said the decision was kept secret from industry until the government announced it publicly and that some of its members had "concerns" with the rules.

"While the prices for coal and diesel have not changed since December 2018, there are new and more stringent rules for new natural gas units that were not shared with industry until last Friday," president and CEO Francis Bradley said.

"CEA is disappointed that ECCC (Environment and Climate Change Canada) did not undertake consultations on these last-minute changes."

It was environmental advocates and “non-emitting industry groups" that were able to convince the government that natural gas plants needed extra rules, according to a paper released by the government in parallel with its new rules.

The paper elaborated on how the government arrived at its decision. It says "some industrial stakeholders" had asked for a higher threshold of 420 tonnes of carbon dioxide equivalent.

"Non-emitting industry groups and environmental stakeholders commented that the standard for new gas units is not sufficient to prevent an investment in new natural gas over lower-emitting generation sources," the paper stated.

ECCC said it "agreed to implement this recommendation" because it "recognizes that, over time, new electricity generation capacity should come from non-emitting sources."

But CEA communications and marketing director Julia Muggeridge argued the regulations for new natural gas units "were very surprising and CEA was not consulted on those."

The organization is now completing a full assessment of the new rules, she added. "As we are still sifting through the 150-page document, I can't provide further analysis on real world impact."

"This measure is truly historic. Combined with the coal phase-out, adopting a price on carbon for electricity generation is one of the most progressive and important measures to transition to a low-carbon electricity grid in Canada." https://t.co/z2INv0z9bu

Federal officials speaking on background said the government had carried out hundreds of hours of consultations on the big-emitters system, and didn't arrive at the decision lightly.

Environment and Climate Change Minister Catherine McKenna said the standards put a price on pollution "in every big industrial facility in Canada" and were "the result of months of consultation and rigorous analysis."

"The goal is to ensure that there is an incentive for Canadian facilities that compete internationally to innovate and be best in class while maintaining a competitive edge in Canada," she said in emailed comments.

"With these regulations, we are following the same approach to competitiveness as jurisdictions including California, the (European Union), and Canadian provinces including Quebec, Saskatchewan, Alberta, and (British Columbia)."

CEA's position clashes with the reaction from the Canadian Wind Energy Association, which applauded McKenna for adopting the electricity sector price on carbon. The organization said it will help "level the playing field with renewables" like wind and solar.

Natural gas emits roughly half the greenhouse gases released by coal. But while Canada has long had a plan to phase out coal-fired power plants entirely by 2030, natural gas is increasingly pushed as an export.

As well, natural gas is mostly methane, a potent greenhouse gas 86 times more powerful than carbon dioxide in trapping heat in the atmosphere over a 20-year period. Methane is released accidentally from leaks in oil and gas equipment. The sector is responsible for much of Canada's methane emissions.

Canada passed regulations that cracked down on methane leaks in the oil and gas sector, but those rules won't be in force for another few years. Meanwhile, Canada is already the fifth-largest exporter of natural gas, according to Natural Resources Canada, and has 18 LNG projects proposed across the country.

A spike in gas exports worldwide would help kill the Paris climate agreement, according to a report by the Global Energy Monitor, as it would add 806 million tonnes of natural gas supply by 2030, instead of cutting global supply by 15 per cent.

That's the amount needed to maintain global heating to 1.5 C above pre-industrial levels and avoid worsening effects of climate change.

The decision to implement the carbon price on natural gas plants also appears to dovetail with a recent report, co-authored by the National Energy Board, that said natural gas is so abundant and cheap in Canada that it poses a challenge to cutting carbon pollution. That report said there need to be "additional policy signals” that could steer the market towards lower-emitting technologies.

The Output-Based Pricing System applies to facilities that emit more than 50,000 tonnes of carbon pollution per year, requiring them to record their emissions against a "performance standard" for the sector to which the facility belongs.

If they pollute less than the standard, they receive credits. If they pollute more, they have the option of either paying the federal government directly using its carbon tax rate, submitting “surplus credits” bought from others or saved up, or submitting “offset credits” earned from projects that reduce emissions.

On Friday, the government proposed a series of guidelines for how the offset-credit market would work, and how it would incentivize the development of clean-tech businesses in agriculture, waste and forestry in particular.

Editor's note: This story was updated at 10:30 a.m. Eastern Time on July 4, 2019 to include additional comments from Muggeridge and McKenna.