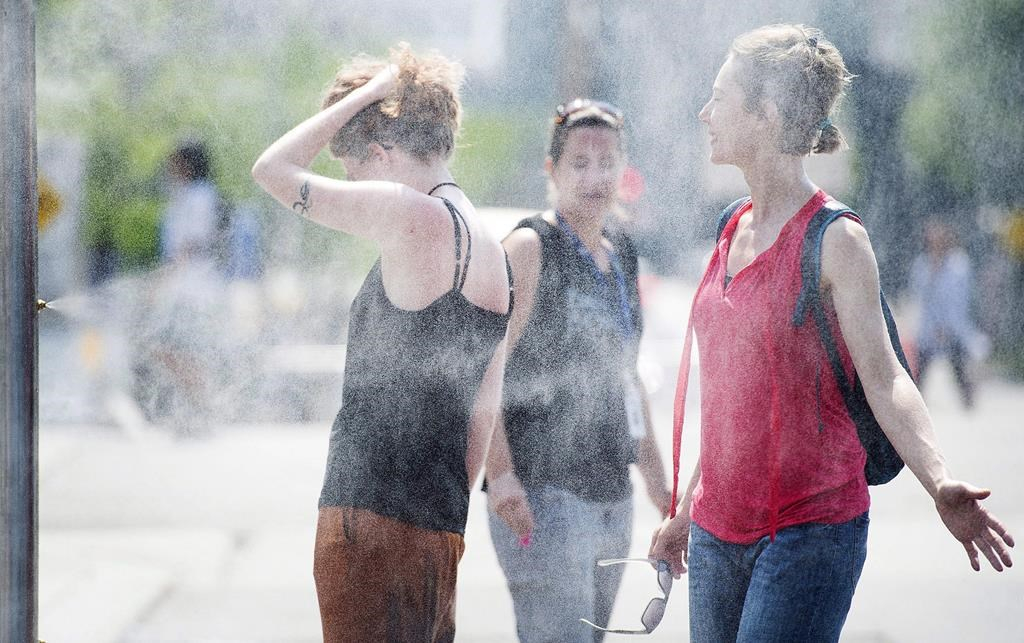 People use misters to cool down during a heatwave in Montreal, on July 2, 2018. Montreal's mayor is unveiling the city's plan to respond to heatwaves after dozens of people died amid high temperatures last summer. File photo by The Canadian Press
Previous story
Next story

With a potential heat wave looming, Montreal says it's prepared to lengthen pool hours and send firefighters door to door to mitigate conditions that contributed to the death of 66 people last year.

"With the floods of the spring, and the winter that was especially difficult, or last year's heat wave, it is clear that we're more and more vulnerable to extreme climate events, and we need to act," Mayor Valérie Plante said Wednesday at a news conference.

Plante said the city's emergency plan is especially focused on vulnerable people such as the elderly, those with chronic illnesses, those living alone, outdoor workers and newborns.

The plan includes extending hours for pools, libraries, community centres and homeless shelters if temperatures climb to dangerous levels for several days in a row.

She said officials will go door to door to check on people, hand out water bottles to the homeless and encourage citizens to stay cool and hydrated.

Longer term, she says the city has increased its budget to plant more trees in order to reduce the heat island effect.

A meteorologist for Environment Canada says Montreal temperatures are expected to reach between 31 and 34 C in the next three days, with a humidex that could reach 40.

Plante said the plan would be deployed if temperatures reach a daytime high of 33 C for three days in a row.

The city's public health authority reported that 66 people, most of them seniors or chronically ill, died as a result of extreme heat on the island of Montreal between June 30 and July 8 last year.

Recommendations in its May report included the creation of a registry of vulnerable people and planting more trees and greenery to absorb heat and combat the heat island effect.

David Kaiser, a doctor with the health authority, said the city is taking a multi-pronged approach to preparing for heat waves.

"On one hand, it's making our neighbourhoods less hot — that's greening, changing building architecture and the way we build our neighbourhoods, reducing the amount of traffic in our neighbourhoods," he said at the news conference. On the other hand is the need to care for the vulnerable and break their social isolation, he said.

Last summer's heat wave officially occurred between June 30 and July 5, when daytime temperatures were recorded between 31.9 C and 35.5 C.

Andre Cantin, a meteorologist for Environment Canada, said this week's weather event will be shorter and less severe than last year, but that Canadians should prepare for more frequent and intense heat waves as global temperatures rise.

"As the years advance, the probability of having the temperatures that we're seeing today and the rest of the week, over prolonged periods, the probability will increase," he said in a phone interview.

Blair Feltmate, head of the Intact Centre on Climate Adaptation at the University of Waterloo, says Canadian cities are not doing enough to combat the "new normal" of hotter summers, noting that last year's death toll could have reached the hundreds had it been accompanied by a power outage.

"We need to take a lesson from each other to act pre-emptively, to get ahead of the curve to prepare for these extreme weather events rather than letting them hit once or twice and realizing there's a new normal we have to prepare for."

While Ontario didn't report any heat-related deaths last summer, Feltmate says that's only because its data is calculated differently than Montreal's.

Lastly, he said more cities should follow Montreal's lead and create a registry of vulnerable people so health officials can reach them quickly during periods of extreme weather.

-- With files from Lia Levesque