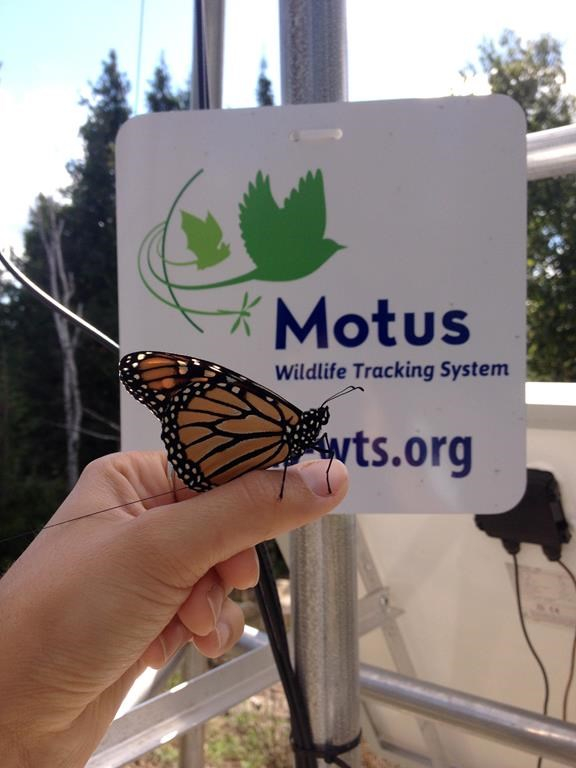 Researchers equipped butterflies with tiny radio-tracking fanny packs to track their distance and speed during fall migration as seen in this undated photo. The devices weigh about as much as a rain drop. Handout photo by The University of Guelph
Previous story
Next story

A study in which insects were equipped with tiny radio-tracking fanny packs could help conservation efforts as populations around the world decline.

The research by University of Guelph biologists published in a scientific journal Wednesday tracked butterflies and green darner dragonflies on their migration through southern Ontario and into the northern United States using radio transmitters.

"We were able to document some pretty basic things that no one had ever done before," said lead author Samantha Knight, who is also a program manager at the Nature Conservancy of Canada.

Researchers captured the insects on Ontario's Bruce Peninsula in the falls of 2015 and 2016. The radio transmitters, which weighed about as much as a raindrop, were carefully glued on the bugs' undersides kind of like fanny packs, Knight said.

The little packs emitted radio signals which could be picked up by towers along the insects' migration route. The signals sent information about speed and distance back to researchers.

Knight explained the bugs' breeding habits and the areas they stay in winter have been studied, but there's almost no information about migration patterns.

Recent studies have shown that habitat loss, land-use changes and global warming mean up to 40 per cent of insect species are at risk of extinction. There's also been a decline in bird populations that rely on insects for food.

When data started to flow in from the fanny packs, Knight said it was really astounding.

On average, the monarchs flew about 12 km/h and darners flew about 16 km/h. One darner surprised researchers by flying 77 km/h and travelling 122 kilometres in just one day.

"If a darner was flying through a town, a cop would pull it over," said study co-author Ryan Norris.

The insects are likely to be even faster, added Norris. They were slowed down by the fanny packs, which weigh about half of the bugs' body weight.

Norris explained the research showed insects are likely to fly high in the atmosphere to take advantage of the wind.

"There are insects flying over our heads all the time and we don't know it."

It also showed monarchs and darners fly faster in warmer temperatures, but they slow down if it gets too hot, so global warming could affect migration. Rain didn't really have an effect on the bugs at all, Norris added.

The research, while preliminary, has opened doors to more knowledge about insects, Norris said. He expects technology to improve so that bug migration can be better understood.

It's extremely important, he said, because researchers looking to develop effective conservation strategies need to know where insects go.

"It's hard to predict what species are going to do if you don't know what they are doing now."