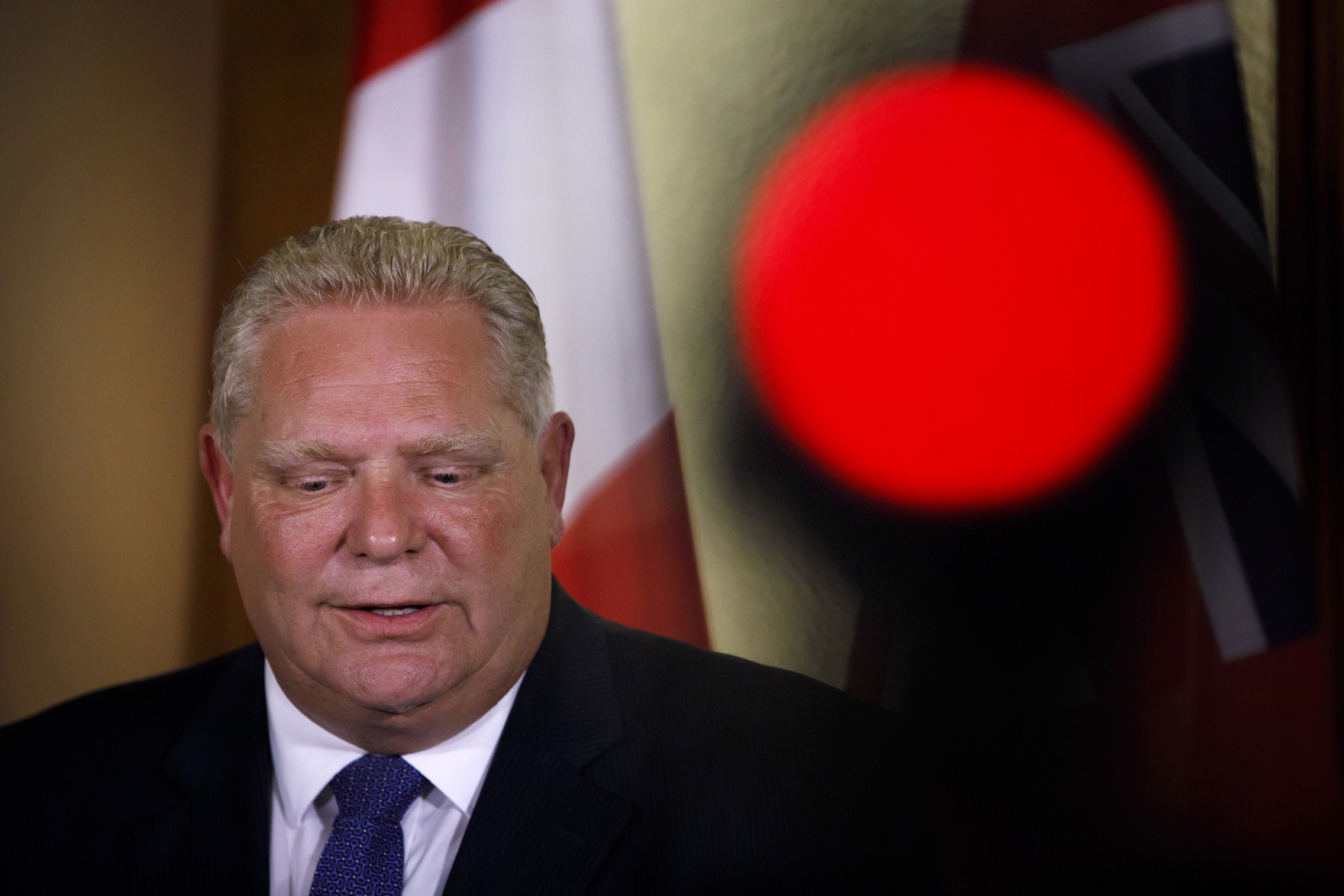 Ontario’s Progressive Conservative government doubled down Wednesday on its decision to eliminate 227 separate pollution-reducing projects, blaming its Liberal predecessor for the cuts.

The projects were fully funded by a $2.9-billion international clean energy trading market — known as cap and trade — that worked to eliminate the carbon pollution produced by industrial emitters, but the Ford government said that cancelling it had saved Ontario taxpayers $880 million. (The government's budget notes that these are direct savings to Ontario private-sector businesses in 2019.)

Facing a barrage of online criticism prompted by revelations, published Tuesday morning by National Observer, that found a wide range of initiatives set to reduce greenhouse gas emissions had lost their funding — including schools, hospitals, small businesses and several social housing providers — Chelsea Dolan, a Ministry of Environment spokesperson, said cap and trade was "a poorly designed, hastily implemented and poorly executed" system designed by the former Liberal provincial government "as a desperate attempt to garner support in the lead up to the election."

"The Liberals gave little consideration to consumers, and did not consult industry in regard to expectations, qualities or deadlines of this runaway program," Dolan said in a statement.

Dolan added that the Ford government had "always been clear about our commitment to eliminating the cap and trade burden from Ontario businesses and families" and that it had "been fully transparent during the orderly wind down of programs funded by the program, including directly notifying our third-party partners affected by the wind down."

According to a leaked document shared exclusive with National Observer, the revenue generated by the cap and trade system was set to fund 120 commuter cycling programs (each worth $25,000) in 120 jurisdictions across the province. It was set to help develop 41 green social housing programs, and 20 improvement or retrofit projects for social housing apartments. It was also going to go toward 11 electric vehicle charging stations.

The biggest portion of the cap and trade revenues were given to the City of Toronto to help assist the building the city's first net-zero community centre in Etobicoke and the first zero-emissions child-care learning centre, as well as help convert the city's transit buses to electric.

Don Peat, a spokesperson for Toronto Mayor John Tory, told National Observer that city staff have been working to find ways to continue many of these projects.

"Mayor Tory is committed to fighting climate change and ensuring that the City of Toronto is at the forefront of that fight," Peat said. "He is committed to working with both the federal and provincial governments to find ways to fund projects that will help our environment."

Federal Environment Minister Catherine McKenna also doubled down in her response to National Observer's exclusive, noting that the decision to cancel cap and trade was "shortsighted."

"This decision was not only bad for the environment and for future generations, that much is obvious, but the cuts hurt scores of people across the province," McKenna wrote in a tweet. "While Conservative politicians like Doug Ford waste public money and make reckless cuts, and there's no question that Andrew Scheer wants to do more of the same, we are the only party with a real and affordable plan to fight climate change. We need to keep moving forward."

While Conservative politicians like Doug Ford waste public money and make reckless cuts, and there's no question that Andrew Scheer wants to do more of the same, we are the only party with a real and affordable plan to fight climate change. We need to keep moving forward.

Opposition critics have expressed outrage that the Ford government continues to back away from climate action, and remains secretive in the details surrounding both its cuts to environmental policy and its new plan.

"By cancelling 227 clean energy projects Doug Ford has cancelled jobs, and signed off on even more emissions to feed the climate crisis," Peter Tabuns, NDP energy and climate change critic, said in a statement. "Doug Ford's crusade against the environment has got to be stopped. We're already experiencing more floods, wildfires and tornadoes in Ontario, and if we don't take action to fight the climate crisis, our children and grandchildren will pay an unthinkable price."

But Tabuns, too, blamed the former Ontario Liberal government for the cancellation: "Kathleen Wynne and the Liberals let us down — they should have been transparent about all the projects being funded through cap and trade," he said.

In a tweet, Michael Coteau, a Liberal MPP and contender for the party's leadership, said, "it will cost far more to not fight climate change than to aggressively confront the crisis head-on. Doug Ford’s misguided, ideological cuts are a recipe for disaster, not savings."

It will cost far more to not fight climate change than to aggressively confront the crisis head-on. Doug Ford’s misguided, ideological cuts are a recipe for disaster, not savings. #onpoli #cdnpoli @fatimabsyed https://t.co/2muNufsFq3

"Ontarians want their government to help with the transition to a greener economy, not turn back the clock on environmental initiatives," said outgoing Liberal MPP Nathalie Des Rosiers in a separate tweet.

In an interview, Green party leader and MPP Mike Schreiner said the Ford government was likely hiding the details of their cancellation of climate action because "they know their cuts are unpopular and their cuts are destructive."

Schreiner spoke to National Observer from London, Ont., on the latest leg in his clean economy tour where he was set to help a local organization to plant trees.

"They're cutting programs within our communities that would help us achieve our (greenhouse gas) reduction targets and targets, that would also at the same time help businesses and community members save money by saving energy," Schreiner said. "For me, this is a devastating blow to our economy, our quality of life and our ability to meet our climate obligations."

"It's little wonder the Ford government is trying to hide it from people," he said.

This morning, as we learned of another 200+ cuts to projects that fight climate change, I was doing tree maintenance with @rfldn in London to restore tree cover.

We should be supporting clean economy solutions, not sabotaging them. #onpoli pic.twitter.com/B4urmQWp8M

A Ministry "spokesperson" made the bald assertion that the cap and trade program was "poorly designed, hastily implemented and poorly executed", so, obviously it must be true. (You can't see me, but I'm rolling my eyes.)

Funny, if it is such a

Funny, if it is such a failure - one wonders why it is still in place and growing - in the prospering states and countries. Only the "cowboys" who are part of the asset stripping brotherhood are fighting to get their share of the spoils before the planet implodes. Wonder what they'll do with all that wealth when there is nothing left to spend it on?