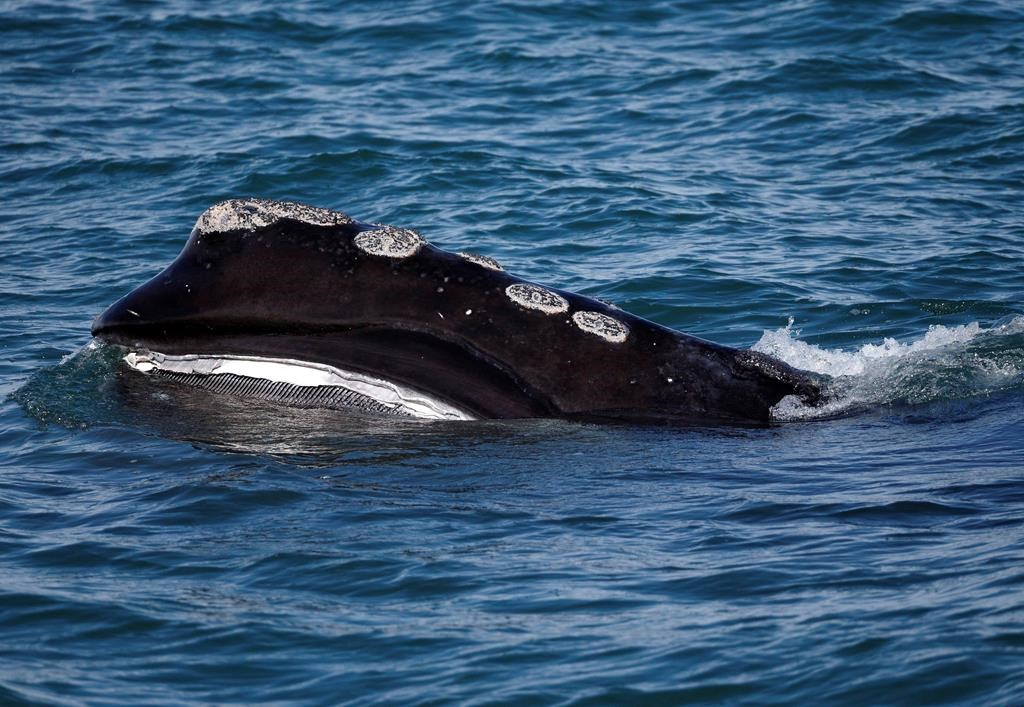 In this Wednesday, March 28, 2018 photo, the baleen is visible on a North Atlantic right whale as it feeds on the surface of Cape Cod bay off the coast of Plymouth, Mass. File photo by The Associated Press/Michael Dwyer
Previous story

The federal government has announced new measures to protect North Atlantic right whales in the Gulf of St. Lawrence that have been dying from ship strikes and getting caught in fishing gear.

The well-being of the endangered species is of great concern to Canadians, Fisheries Minister Jonathan Wilkinson said Monday. There are believed to be only about 400 right whales left in the world.

"With the tragic loss of six North Atlantic right whales this year, our government is implementing urgent new measures and is taking additional actions to further protect this iconic and endangered species," Wilkinson said in a statement.

The new protections will include increased aerial surveillance to try to spot the whales in the gulf and extending speed limits for ships east of the current speed-restriction zone, where vessels will have to reduce speed to 10 knots when a right whale is spotted in the area.

Smaller ships — those longer than 13 metres — will now also be subject to the speed restrictions, where previously only ships over 20 metres were affected.

Last week, The Canadian Press reported that previous measures taken to protect North Atlantic right whales in the Gulf of St. Lawrence from being struck by ships and getting caught in fishing gear were not going far enough, according to a federal scientific review.

Speed restrictions and fishing-zone closures have lowered risks that the endangered whales will be harmed, but dangers remain — especially in the waters outside protected zones. Ships have been spotted speeding up just ahead of slow-down zones, which significantly increases mortality risk to the whales, according to the national study.

The scientists who completed the review also raised concerns about the size of the slowdown zone being reduced in 2018 in an area north of Anticosti Island, an especially risky area for vessel strikes. This, coupled with limited monitoring of the whales in some of these areas, prompted calls for increased surveillance.

"These (new) measures build on those I had recently announced," Garneau said. "The government of Canada remains committed to taking every action necessary to help protect this important species including those initiatives contained in the oceans protection plan and the whales initiative."

In addition to the six deaths this year, a further three whales are currently entangled in the southern waters of the gulf and efforts are underway to free them.

To reduce future entanglements in fishing gear, the trigger to close a fishery is being adjusted so that if even one right whale is spotted anywhere in the gulf, all non-tended fixed-gear fisheries will be closed for 15 days in addition to existing fishery closures in the gulf.

Major fixed-gear fisheries in the southern Gulf of St. Lawrence were closed for the season on June 30. Some fisheries do remain open, but the federal fisheries department says the scale of fixed-gear fishing activity will decrease.

Money is also being dedicated to enhance monitoring and conservation efforts and to beef up the response program that attempts to free marine mammals in distress, including disentangling North Atlantic right whales from fishing gear.

Because North Atlantic right whales cross international waters, Canadian officials will also be seeking to meet with counterparts in the United States to explore joint measures to address risks faced by the whales.