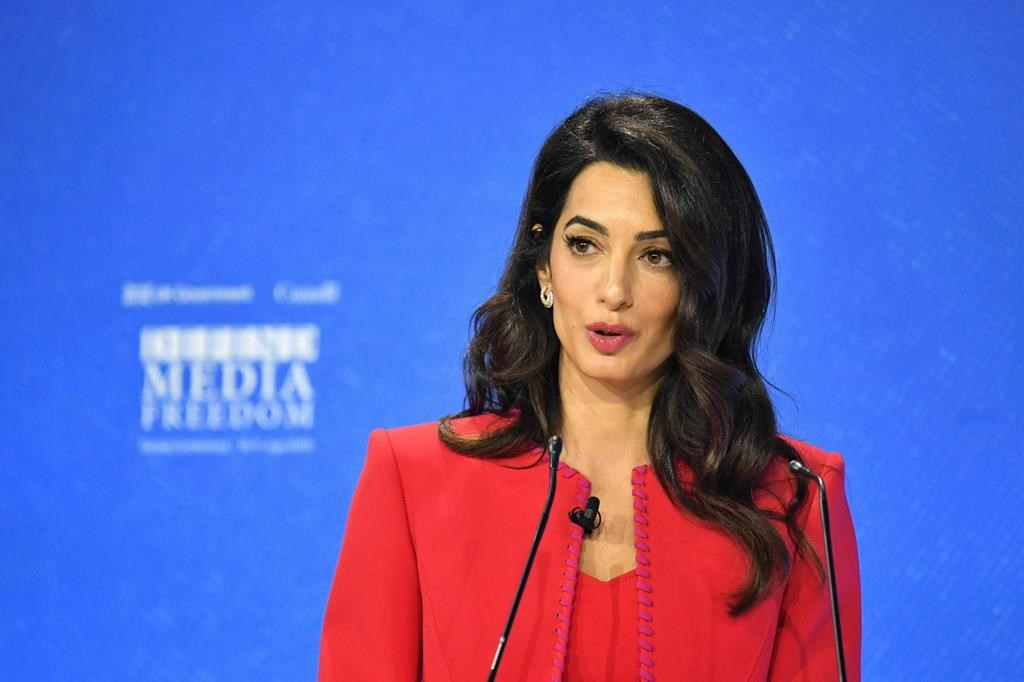 Amal Clooney speaks during the Global Conference for Media Freedom at The Printworks in London, on Wednesday, July 10, 2019. Photo by Dominic Lipinski/PA via AP
Previous story
Next story

U.S. President Donald Trump's attacks on the media make reporters more vulnerable to abuse around the world, a prominent lawyer for the rights of journalists told an international gathering on Wednesday.

Amal Clooney didn't mention Trump by name but singled out the phenomenon as happening in the country of James Madison, a Founding Father who became the fourth U.S. president.

"Today, the country of James Madison has a leader who vilifies the media, making honest journalists all over the world more vulnerable to abuse," Clooney said at an international conference on media freedom in London.

The joint British-Canadian event featured participants from about 100 countries, including politicians, journalists and other activists.

It was billed as a response to the unprecedented and rising danger to journalists around the world. While the United Nations cited the fact that 99 media workers were killed across the globe last year, Clooney's comment drew attention to growing anti-media sentiment in many democratic countries.

It also highlighted the impact of Trump's anti-media tirades in emboldening crackdowns on media by authoritarian leaders in Russia, Turkey and the Philippines, among others.

"These problems are global and they exist even in countries that otherwise have a strong tradition of free speech," said Clooney, who has represented journalists imprisoned in Myanmar and the Philippines. Journalists have also been subjected to recent police actions in Britain and Australia, she added.

Trump has repeatedly called the news media "the enemy of the people," and accused it of selling "fake news" to its readers. He has also called journalists "crazed lunatics."

As the London conference unfolded, the "fake news" slur was levelled again by an elected official in another G7 capital — Ottawa — when a city councillor used the term to criticize a CBC reporter whose story was based on municipal government documents.

Coun. Shawn Menard said on Twitter it was unacceptable for Hubley to resort to "alt-right 'fake news' allegations" and called on him to "immediately apologize."

Governments from Saudi Arabia to China to Iran have long restricted journalists but the trend is spreading, said Martin O'Hanlon, president of the media union CWA Canada, from London.

"We're seeing the rise of demagogues and ultra-conservative parties in formerly progressive countries like Poland, the Czech Republic, Hungary, Turkey, and the Philippines, who are openly hostile to the media," said O'Hanlon, a former news editor in the Parliament Hill bureau of The Canadian Press.

"Let's be clear: journalism is a pillar of democracy and attacks on the media are attacks on our democratic systems."

While she's grateful the two ministers are shining a light on the unprecedented dangers to journalists around the globe, she said they need to do more than make supportive speeches.

O'Hanlon's organization is advocating a plan to bolster the protection of journalists, and one that they hope others will adopt.

Among its points was a call for the creation of a "press passport" similar to a diplomatic passport, sanctions against individuals and government leaders who harm journalists, and support for the UN Convention on the Safety of Journalists and Media Professionals.

"All governments say they support press freedom. The right is even enshrined in North Korea's constitution. What matters is enforcement of that right. And enforcement depends on states," said Clooney.

"My message to all the ministers who are here is that signing pledges and making speeches is not enough. They must make sure that their laws respect media freedom and that their police, prosecutors, judges and citizens do the same."

Politicians support freedom of speech and the press until their pecadillos and malfeasance become the subject of reportage. Then the demogoguery erupts. The current crop of "leaders" - too many of them with authoritarian core beliefs, and kleptocratic inclinations are essentially cowardly bullies who have achieved their prominence, usually by unsavoury methods, and have the universal reflexive response, piled on lies, and violence.

I do understand people's

I do understand people's frustration with media.
I'm not convinced a different kind of passport would solve more problems than it could cause. Why? Because who, then, would decide who is a legitimate journalist, compared to, say, those who report and amplify Ford-Trump style messaging, or those who repeatedly fail to fact check ... or to report selectively. Compared to, say, those who in the name of "journalism" let highly-placed officials get away with setting interview agendas and failing to answer questions, accepting their side-steps.
In this next election, we need to line up 3-or-4 deep, ask the questions (say on climate change and tarsands), and repeat the same question after voicing the truth: that the question asked by the first wasn't answered.
As long as people, including journalists, accept weasel-words and revel in their access to "high places" instead of highlighting waffling where it should be plain to anyone calling him/herself a journalist, then we'll get more of the same and nothing but.
Why are people so cowed by politicians that they can't call a shovel a shovel, and instead focus on the BS payload?
Perhaps more to the point of killing of journalists, why not use market interventions against countries that don't provide substantive protection? Where are the UN finance and trade sanctions against Saudi Arabia, when it's been made clear and widely reported how and why Kashoggi was killed? How does calling someone a "rogue actor" absolve the state? It's not even as sophisticated as "The devil made me do it" or "I didn't do it, my hand did."
Seriously, until there are enforcement teeth, there is no real law. Just as without a press with journalistic integrity, there is no democracy.
And btw, the headline is misleading. Putting an 's after Trump's name (like that) would have made it clear rather than clickable for all the wrong reasons.