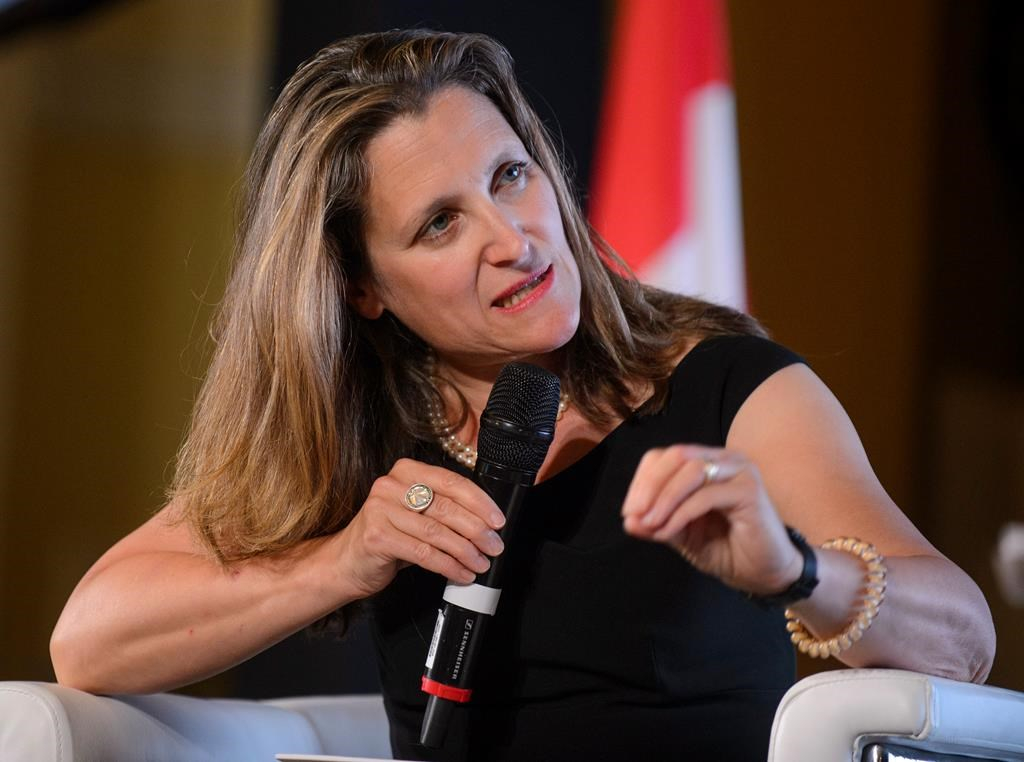 Minister of Foreign Affairs of Canada Chrystia Freeland speaks during a panel at the Ukraine Reform Conference in Toronto, on Wednesday, July 3, 2019. File photo by The Canadian Press/Andrew Lahodynskyj
Previous story
Next story

Foreign Affairs Minister Chrystia Freeland is seeking to distance the Trudeau government from its former ambassador to China, a day after he said he has warned Chinese officials that further punishments against Canada could help the opposition Conservatives win the fall election.

In her response about McCallum, she also made a point of highlighting the government's ongoing efforts to protect Canada from foreign election interference.

"Let me say first of all — very clearly — that Mr. McCallum does not speak for the government of Canada," said Freeland, who reminded reporters on the conference call that Prime Minister Justin Trudeau asked for McCallum's resignation earlier this year. Freeland was in London, where she participated in a global conference on media freedom.

"I think that it is highly inappropriate for any Canadian to be offering advice or opinions to any foreign government on how that government ought or ought not to behave to secure any particular election outcome in Canada."

McCallum's recent comments to the South China Morning Post came with the two countries locked in a diplomatic dispute that has seen Chinese authorities block key imports from Canada and detain two Canadians on espionage charges.

He told the newspaper that he warned his contacts in China's foreign ministry that further negative actions against Canada would help the Conservatives, a party he described as much less friendly to China.

McCallum, an economist and Liberal cabinet minister before he was named an ambassador, was fired by Trudeau in January after going off-script in the government's efforts to win the release of detained Canadians Michael Kovrig and Michael Spavor.

"I forcefully and unequivocally condemn recent comments by high-profile Liberals encouraging the Chinese government to help re-elect the government this October," Scheer said in a statement Wednesday.

"This invitation of foreign interference in the Canadian election — to a regime that has proven itself hostile to Canadian interests — is absolutely reprehensible."

Freeland noted how liberal democracy is under threat as countries like Canada try to address foreign election interference.

"Canada's election is about Canadians, full stop," she said Thursday.

"Canada's election, coming in the fall in October, is the moment when Canadians — and Canadians only — decide who should next lead their country."

The arrest of Huawei's Meng has enraged the Chinese government, which has demanded her release.

In the days following her arrest, Chinese authorities detained Kovrig, a Canadian diplomat on leave, and Spavor, an entrepreneur, on allegations of undermining China's national security.

Chinese officials have also increased inspections on Canadian goods that have led to the suspension or obstruction of key agricultural imports, including meat and canola.