N.L. captivated with marine visitors - and scientists couldn't be happier 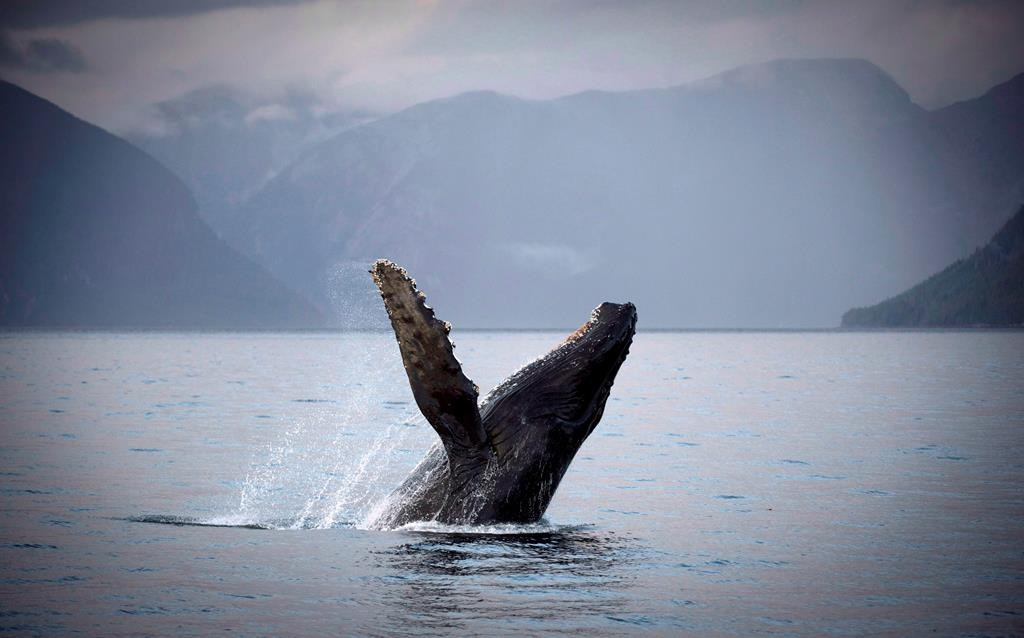 A humpback whale is seen just outside of Hartley Bay along the Great Bear Rainforest, B.C. on Sept, 17, 2013. File photo by The Canadian Press/Jonathan Hayward
Previous story

Newfoundlanders are flocking to capture images of the annual, picturesque arrival of iconic marine species both tiny and massive -- and creating a valuable resource for scientific research.

Tens of thousands of small, silvery capelin wash ashore each summer to spawn in what's known as the annual "capelin roll," bringing with them humpback whales and other animals looking for food.

Footage of the impressive events — shiny capelin wriggling on beaches and diving humpback whales — have begun to surface online from spectators around the island's southeastern beaches.

This week, humpbacks dazzled onlookers on St. Vincent's beach on the island's southern shore, diving and splashing their tails.

The displays are nothing new, but migratory patterns of capelin, crucial to the food chain in Newfoundland and Labrador's waters, have changed over the years. The tiny fish now spawn in smaller numbers about a month later they did before the 1990s, says federal scientist Hannah Murphy.

Their changing traits and habits make social media photos and videos — showing capelin being chased by cod fish and picked up by swooping seabirds — even more valuable, providing scientific insights and stunning visuals that people are only too happy to contribute.

"It's a pretty phenomenal event when the capelin come in and spawn," Murphy said by phone Thursday.

Murphy uses photos submitted online through a popular capelin roll hashtag and website to track them up Newfoundland and Labrador's beaches, comparing those movements to historical data on the species.

The annual hashtag and website, both set up in 2016, have seen growing engagement over the last few years, and citizen photos also play a role in helping document the patterns of the capelin's largest predators.

Jack Lawson, who specializes in marine mammal research, says citizen photos taken with increasingly capable smart phones and cameras have become a valuable resource that's expanded the range of research into where and when marine mammals arrive around the island.

Lawson says people seem to have embraced the powerful role their whale watching trips can play in science's understanding of the impressive creatures' lives.

"We've worked really hard in science to say ... 'Look, you people are representing a huge resource in terms of eyes out on the water that we couldn't afford or have the staff to do,'' Lawson said by phone on Thursday.

Since the arrival of the capelin, humpbacks, minke whales, fin and blue whales have been spotted off southern Newfoundland, Lawson said, many of them documented in stunning images from amateur and professional photographers.

Lawson credits this year's influx of submitted photos, in part, to a general growing public interest in whale preservation after the recent spate North Atlantic right whale deaths over the past month.

There are certainly risks involved when spectators flock to observe wild animals, especially curious creatures like humpback whales, which Lawson said often approach vessels on their own.

Last July, the federal government tightened the minimum approach distance to 100 metres for most whales, dolphins and porpoises, to protect the animals from injury and raise awareness of risks.

But Lawson said there's been a general shift in scientific thinking as researchers recognize the value of a citizen population armed with high-quality cameras with a passion for preserving the natural world's wonders.

"Scientists have begun to realize the value for science and are more willing to accept and include civilian submissions in their studies," Lawson said.

Murphy says growing public engagement in documenting wildlife for science is a good sign that will be valuable in the long-term for preserving species.