Once driven near extinction, wild turkeys making themselves at home in Quebec 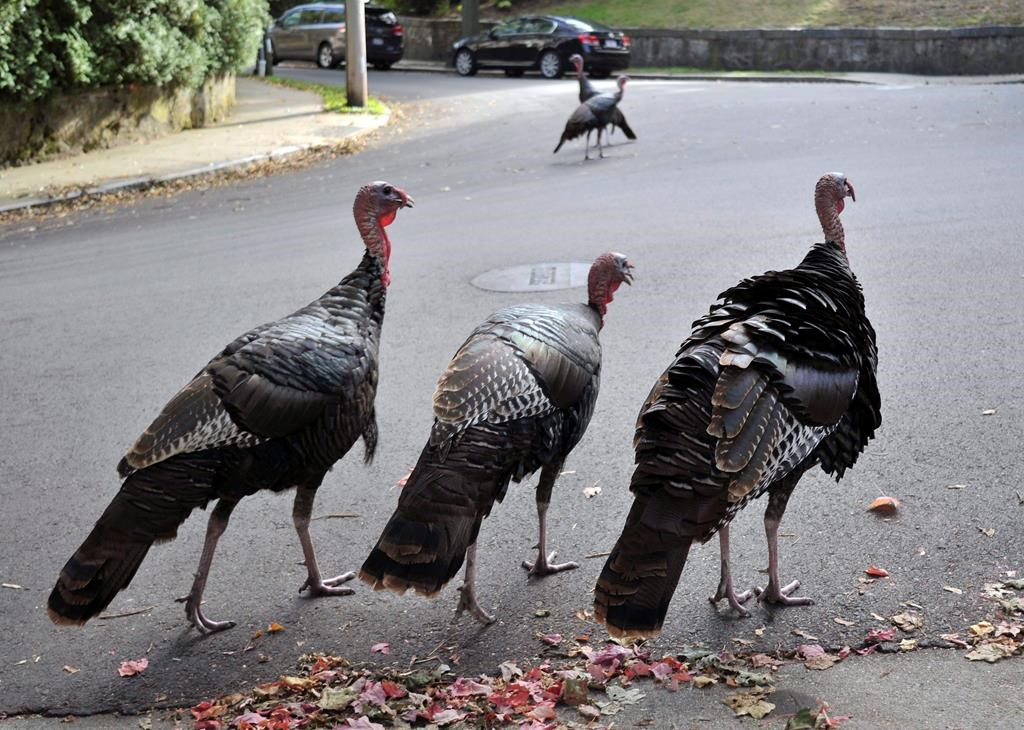 Wild turkeys walk along a street in a residential neighborhood in Brookline, Mass. on September 27, 2017. File photo by The Associated Press/Collin Binkley
Previous story
Next story

They arrived a few years ago — three-foot tall, bare-headed visitors that would occasionally stare intently at residents from their balconies and yards.

The wild turkeys frankly unnerved some citizens of St-Sauveur, a picturesque town in the Laurentians region north of Montreal, says Jean Beaulieu, the town's general manager.

"They were in people's yards, on their cars, and there were people who were scared to leave their homes because they can be aggressive, especially when they have their young," Beaulieu said in a phone interview.

Once hunted near extinction, wild turkeys are an increasingly common sight in southern Quebec, thanks to warmer winters and a successful conservation and relocation program that has brought their numbers back from the brink.

But Beaulieu says despite the initial shock, few people in the town seem bothered anymore.

"The first time you see them you're surprised, because it's pretty spectacular, the colour, the size, it's a pretty big animal. But you get used to seeing them," he said, adding that the birds appear to have become more shy in the years since they were reintroduced.

Andre Dumont, a biologist with Quebec's wildlife department, says it's difficult to know how many turkeys there are, because their population can fluctuate drastically.

A harsh, snowy winter can reduce their numbers by as much as half, while a hot, dry summer creates ideal breeding conditions. Therefore, he says the department relies on an annual survey of hunters to gain an impression of how the population is doing.

What is clear, he says, is that their population has been gradually increasing over the years in southern Quebec and Ontario, thanks in part to milder winters, long growing seasons, and a conservation program started in the United States a few decades ago. Hunting was restricted, habitats were preserved, and trapped birds were reintroduced to areas where they'd once disappeared.

"It's a nice story of re-establishing a species," he said.

The turkeys' return is pleasing to hunters, who pour about $5 million a year into the province's economy during the annual hunt.

Steve Tardif, the president of hunters' group Club Dindon Sauvage Montreal, says he believes the population has stabilized rather than grown in recent years, and that new sightings can be attributed to migration rather than expansion.

"We see areas where we never saw turkeys and now we see them, whereas other areas that had a large population don't," he said.

While hunters may be happy to see the turkeys, not everyone feels that way.

Their large size and presence near roadways can be a potential hazard for drivers, and Dumont said the Gatineau, Que., airport has had to deal with turkeys on its runways.

A spokesman for Transport Canada says turkeys, like any large birds, can threaten aircraft.

"Airports take a number of steps to reduce the threat of bird strikes, including grass cutting, visual and auditory repellents, and population control," Alexandre Desjardins said in an email.

Farmers, too, have complained about them destroying fields, although Dumont says they're often being unfairly blamed for damage caused by other, more discreet animals such as deer or raccoons.

"It's a big bird that we see from far, that is awake when we are," he said by way of explanation. "The studies have shown that a lot of damage to the harvest that is attributed to birds, is done falsely."

Both Dumont and Tardif see the turkey's return as a positive, chalking it up to win for biodiversity and conservation. Both say Canada's tough winters make it unlikely the population will ever grow to an entirely problematic level.

And Tardif points out they're also delicious.

He recommends they be served either smoked, marinated and barbecued, or as a traditional holiday meal.