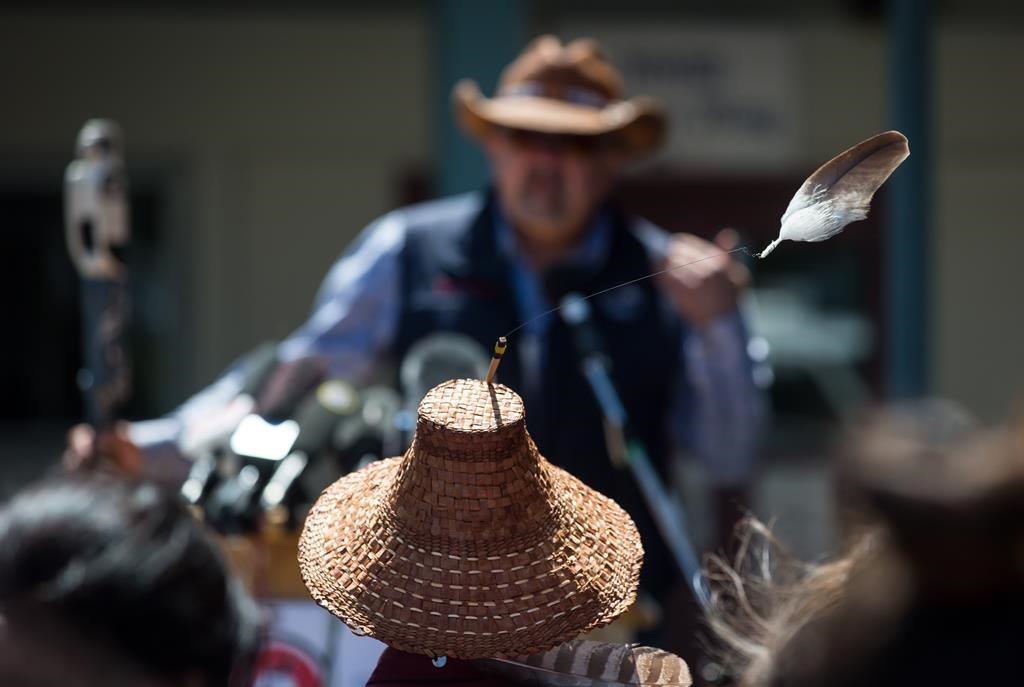 An eagle feather attached to a hat worn by Chief Ed Hall blows in the wind as Chief Joe Alphonse speaks during a ceremony to commemorate the wrongful trial and hanging of Chief Ahan, in New Westminster, B.C., on July 18, 2019. Photo by The Canadian Press
Previous story
Next story

Chiefs who gathered in New Westminster, B.C., to commemorate an Indigenous leader's wrongful trial and execution 154 years ago say they see signs of reconciliation from the federal government but their struggle for recognition continues in the courts.

Chief Ahan was hanged in the city's downtown on July 18, 1865, and a ceremony memorializing his exoneration was held on Thursday at a high school where the Tsilhqot'in Nation believes its ancestor could have been reburied after his remains were transferred from the courthouse square decades ago.

Members of the Tsilhqot'in have gathered in New Westminster every year since Ahan was killed but Thursday's event was hosted for the first by the City of New Westminster.

Chief Joe Alphonse, tribal chair of the Tsilhqot'in National Government, said that gesture is part of the partnership the nation is building with the city, which removed a statue earlier this month of Judge Matthew Begbie.

Begbie, known a the hanging judge, was involved in the trial and execution of five other Tsilhqot'in warriors about a year before Ahan was hanged.

"Our members really rejoice the fact that that statue was taken down and Judge Begbie is not someone to be honoured," Alphonse said.

The nation had asked the province and school district about a decade ago to conduct DNA tests if Ahan's remains are ever found, but neither has agreed. The school will be torn down and a new school is being built nearby.

"You guys brought him down by horseback and if we're able to get his remains we will bring him back by horseback," he said of the actions of settlers.

Chiefs from the Tsilhqot'in and those from two host territories joined the gathering that included Mayor Jonathan Cote, Coun. Chuck Puchmayr as well as an official from the city's education board and Member of Parliament Peter Julian, who attended New Westminster Secondary School.

Historian Tom Swanky said Ahan was arrested in May 1865, after five other Tsilhqot'in men were hanged during the Chilcotin War, when Indigenous leaders reacted to an attempt by settlers to deliberately spread smallpox for a second time.

Swanky said all six Tsilhqot'in leaders were arrested and given brief trials, five of them were hanged in Quesnel and Ahan later met the same fate in New Westminster.

Chief Jimmy Lulua of the Tsilhqot'in said Thursday's event was significant because it involved multiple generations of the First Nation, as well as officials from the city that was the final resting place of a warrior leader who was unjustly killed.

"We've honoured the other five chiefs but this is the last chief that we needed to honour so today that's what it was about — honouring the sixth and final war chief," Lulua said.

"All these legends, stories are taught to you but no one's really talked about what has been done since. How did you honour and mourn for that chief?"

The Supreme Court of Canada ruled in favour of the Tsilhqot'in in June 2014 when, for the first time in Canadian history, a First Nation was granted title to a piece of land the Aboriginals claimed as their own territory.

Lulua said much work remains to be done despite that historic victory.

"It's nice to win title but at the end of the day you have to start managing title and with no resources given to us we're managing title with zero funds."

He said the nation is working on an agreement with the federal government on management of resources but other issues remain unresolved involving the provincial government.

The Tsilhqot'in Nation is scheduled to be in B.C. Supreme Court on July 29 as part its dispute with Taseko Mines, which aims to begin investigative drilling in the Williams Lake area for a proposed copper and gold mine.

Taseko and the Tsilhqot'in are both seeking injunctions over the company's access to the proposed New Prosperity mine project.

The company has said it's attempting to prove that two lakes with spiritual significance for the Tsilhqot'in will not be harmed by the project, which was approved by the former B.C. government in 2010 but rejected twice by the federal government on grounds it would harm the environment.

Tsilhqot'in leaders say the province's approval of the mine is a rejection of the United Nations Declaration on the Rights of Indigenous Peoples.