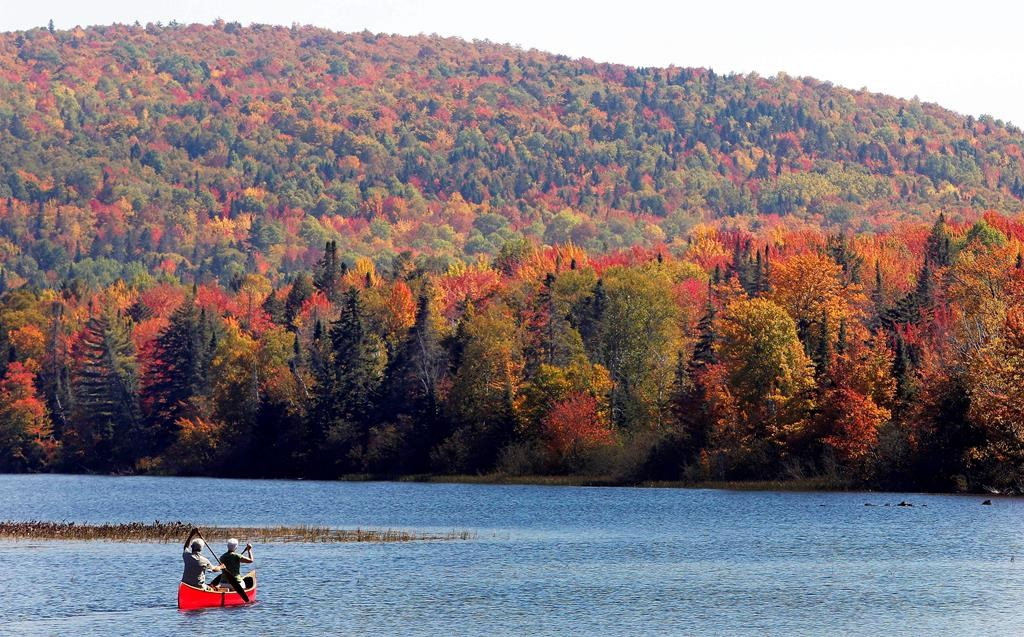 In this Sept. 27, 2014 file photo, Brad and Sue Wyman paddle their 1930's Old Town Guide canoe along the Androscoggin River as leaves display their fall colors north of the White Mountains in Dummer, N.H. File photo by The Associated Press/Jim Cole
Previous story
Next story

The New Hampshire Supreme Court dealt a possibly fatal blow Friday to plans for a hydropower transmission line that has raised concerns among communities and environmentalists that it would harm tourism and property values.

In its unanimous ruling, the court upheld a state committee's rejection of the Northern Pass project. The court didn't accept the argument of the utility behind the project that the Site Evaluation Committee never considered all the evidence, as required by law, or the possible ways the company could mitigate opponents' concerns.

The energy company, Eversource, wanted the court to send the case back to the committee for reconsideration following its decision last year to reject the application.

The $1.6 billion project proposes to send Canadian hydropower through 192 miles of transmission lines in New Hampshire to supply power to a million homes in southern New England.

Associate Justice Anna Barbara "Bobbie" Hantz Marconi, who wrote the decision, said the court was limited to whether the committee's "findings are supported by competent evidence in the record and are not are no erroneous as a matter of law."

"We have reviewed the record and conclude that the Subcommittee's findings are supported by competent evidence and are not erroneous as a matter of law," she wrote.

Although Eversource could try to submit a new plan to the evaluation committee, the company has lost most of its political support in the state including one of the most vocal backers, Republican Gov. Chris Sununu. Sununu had long supported the project as a way to reduce energy costs.

"The Court has made it clear - it is time to move on," Sununu said in a statement. "There are still many clean energy projects that lower electric rates to explore and develop for New Hampshire and the rest of New England."

Eversource, which has long said the project would get built despite a recent string of judicial and regulatory defeats, said it was reviewing its options. They had hoped to finish the project by 2020.

"We are deeply disappointed that the New Hampshire Supreme Court reached this decision, but we are grateful for their consideration and deliberation in this case," the company said. "Northern Pass was the most advanced project to bring abundant low-cost, clean energy into the region, and this outcome is an unfortunate setback to our efforts to advance an affordable clean energy future for our customers."

Northern Pass has been one of the most contentions projects in the state, long pitting unions and business interests since it was proposed in 2010 against rural residents and environmentalists.

Opponents in orange jerseys packed hearings arguing that the proposal for towering transmission lines would hurt the tourism industry and destroy their rural way of life. Others complained the disruptions would be borne by New Hampshire residents while most of the energy would go elsewhere.

But most assumed the company, which had received numerous federal approvals and was contracted to supply power to Massachusetts, would eventually win approval. Then, the committee denied the application.

The committee's rejection last year led Massachusetts to drop the project and shift toward Maine.

That project will bring Canadian hydropower through transmission lines in Maine. The $1 billion New England Clean Energy Connect has won the support of Democratic Gov. Janet Mills. The Maine Public Utilities Commission also gave its approval, but several other agencies must sign off on the project.

In New Hampshire, the court's ruling was welcomed by opponents who hopeful the ruling would spell the end to Northern Pass.

"Today's Supreme Court decision is the right one for New Hampshire," said Tom Irwin, vice-president and director of Conservation Law Foundation New Hampshire. "Eversource has been nothing but dismissive of community concerns throughout this process and that alone is enough to reject Northern Pass for good."

The Society for the Protection of New Hampshire Forests said the court's ruling showed there was no viable path forward for Northern Pass.

"We took on Northern Pass because we saw the proposed overhead line as a direct threat to conserved lands in the state, including three of our Forest Reservations and dozens of conservation easements," said Jane Difley, president/forester of the Forest Society.

The Historical model of

The Historical model of massive public utility grids to support the virulent urbanization/suburban sprawl of the western world is gradually crumbling from aging infrastructure, bloated (corrupt?)repair/restoration costs and the inflated costs of the status quo "standard of living". All of which may conspire to force the urbanized, industrialized and over paved, agglomerations of humanity defacing the world into a more sustainable, technically superior model of self sufficiency no longer dependant on the massive extraction of resources, the ceaseless transport of same from huge distances to markets, the overconsumption and toxicity of too many of the consumables. In short the current model of life is rapidly declining into decay and only the green revolution will preserve a liveable planet with balanced and natural lives for all.