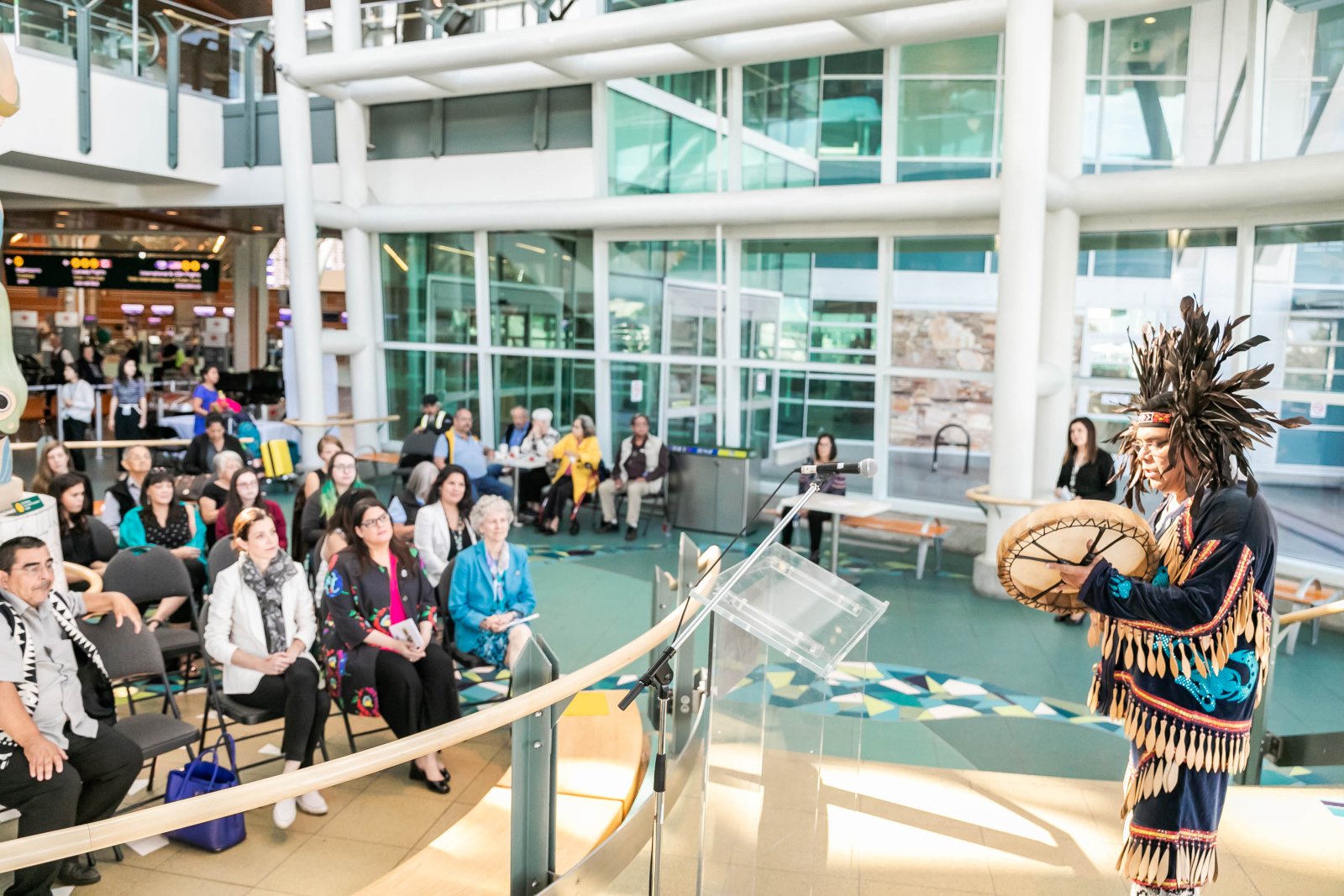 Wendy John says her husband travels a lot, so he's always going back and forth to Vancouver's airport. Over the last couple of years, he's seen a change — when he walks through the gates, he sees Musqueam faces. He could see a customer service agent he recognizes, or a friend stepping out of an elevator that leads to the airport’s offices.

"He said, I just love coming into the airport now, because you see your own people," said John.

That's because of the 30-year Friendship and Sustainability Agreement that Musqueam, a First Nation in British Columbia, signed with Vancouver International Airport (YVR) in 2017. The agreement ensures employment and training for Musqueam people, revenue-sharing with the band government and engaging Musqueam in the airport's development.

John says the agreement is the first of its kind in the country where an airport shares its wealth with a First Nation for operating on their ancestral land.

John is xʷməθkʷəy̓əm, or Musqueam, which means people of the məθkʷəy̓ plant. She is a councillor for the band government, and helped negotiate the YVR agreement. For a long time, Musqueam have been excluded from economic development in the city that was built on their territory without permission — which is why the agreement means so much to John.

"I still get a little emotional about what we did here," she said. "It's such a huge step for our community to be involved in the development of their lands in such a significant way."

Today, about 90 Musqueam people work at the airport in some capacity, from artists selling their work in a gift shop, to construction and administration.

The airport has shared over $10.9 million over the last two years, with the agreement to share 1 per cent of its annual revenue with Musqueam every year for 30 years. 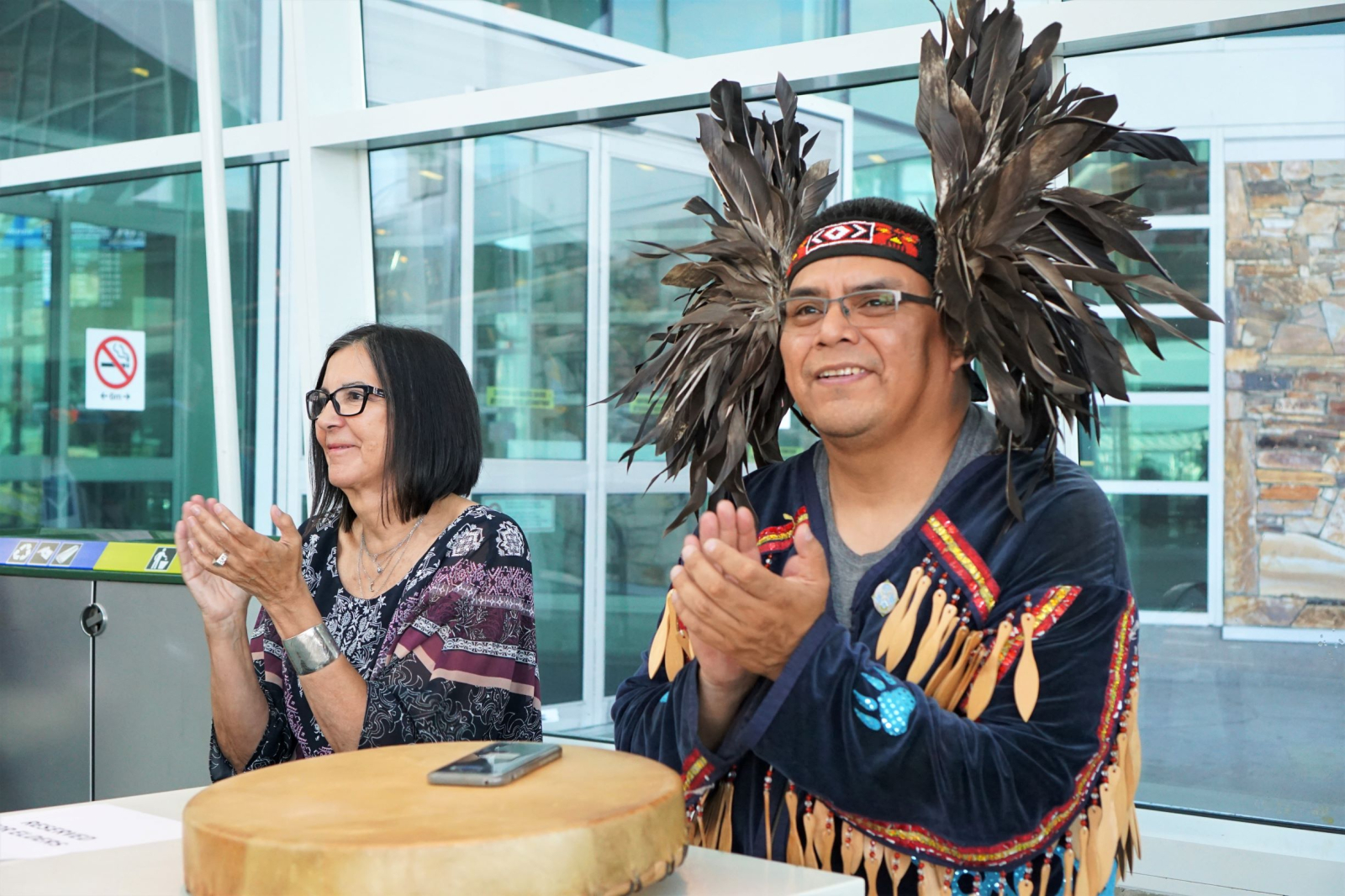 But John says the value goes beyond how many dollars Musqueam earns.

She says the success and opportunity it allows for careers and representation within the airport is invaluable, and it contributes to the airport and all its visitors "recognizing who we are as Musqueam."

Creating signs of ‘welcoming and gratitude’

Mary Point from Musqueam is the manager of Indigenous relations at YVR, and she's been organizing another project she's passionate about — mounting Musqueam signs along the road leading to the airport.

On July 11, she announced the airport had chosen an art submission from the community, and the banners now line the boulevard where thousands of cars head every day.

"This was my dream, on my first day, to get these up on the boulevard," she said. "To get something up, flags, anything. So, I just can't believe we have these."

Tom Cannell, or ʔəyxwacəlenəxw, and his daughter Summer's submission was chosen, and their designs now line the boulevard. The banners include the tracing of Summer's hands.

"As is our tradition and custom, we wanted to convey a sense of welcoming and gratitude," said Cannell.

"We were mostly trying to invoke feelings of celebration," he added. "I've had people in my family blessed with new opportunities already."

Alec Dan, who welcomed everyone to the celebration, said the banners also add a sense of place and Musqueam history to the bustling airport.

"It's wonderful to see helping our own people, but also sharing with all the visitors that come in and out of YVR to really realize whose territory they're landing in," he said.

"We had a couple villages out here on Sea Island. There were wonderful huts, fishing and spots to gather our resources," he added. "We're on the unceded territory of the Musqueam People."

'Those guys are making money on our land, and we need to do something about it'

Musqueam had to fight hard for recognition of their history on the land where YVR now stands.

John says early negotiations between Musqueam and YVR began when the airport moved to expropriate some of Musqueam's reserve land for a third runway in the 1980s. But the relationship remained dormant until a few years ago.

John, who’s on Musqueam's council, says she remembers their chief, Wayne Sparrow, coming back from a trip to Richmond and passing the airport. He turned to her in a meeting and said, "Those guys are making money on our land, and we need to do something about it."

But she says it was hard to create an agreement that didn't just make shallow promises and land acknowledgements, but instead created true partnership and benefit-sharing.

"We don't have resources the way other communities do," she said, since Musqueam had much of their land stolen and expropriated for the development of Vancouver.

"So Musqueam is taking a very different tactic on how we give life to our title," she said. "Like, how do we create a relationship to share in the bounty of the money that's being created off our land?"

Two years in, the agreement has given 21 Musqueam members scholarships of $10,000 each. There are almost 100 Musqueam employees, and Point says jobs are coming up almost faster than they can hire people. It's creating a new sense of community, she says.

Victoria Sparrow is one of those employees. She was recently hired as document controller for engineering projects, which means she acts as liaison between the architect, owner and contractors.

She says after she joined MyYVR, an internal communication software for YVR employees, she immediately got a notification.

Point said elders emphasized the importance of this kind of community during consultations on how to enforce the agreement.

John says this relationship can help teach businesses how to treat First Nations as equal partners.

"The business people need to stand up and respect the idea that First Nations come to the table and are able to do a job," she said.

She said Musqueam may operate differently, but their construction companies and employees still get the job done.

"We do business differently, for sure — what we're talking about is family. They need to acknowledge that diversity they say that they adhere to, by allowing people to be who they are within the company."

Culture in a bottle: Inside the first Indigenous-owned winery in North America