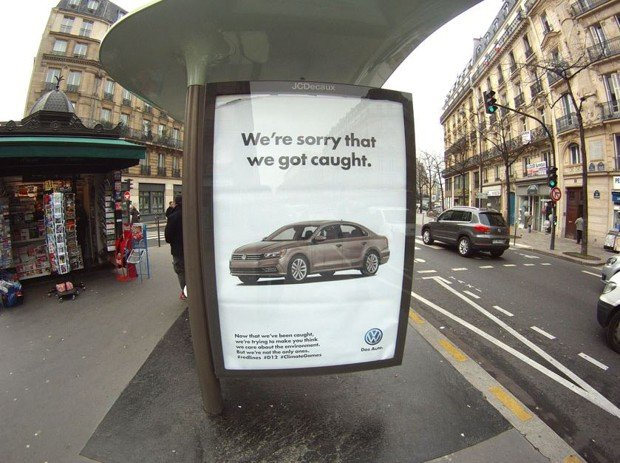 A spoof advertisement by Brandalism is seen in Paris during the COP21 meeting in 2015.
Previous story

Environmental groups are suing the Canadian federal environment minister, Catherine McKenna, to discover why Ottawa has failed to go after Volkswagen as aggressively as others for selling emission-cheating diesel cars in Canada.

Ecojustice, acting on behalf of Environmental Defence staff, said it has launched the case to hold McKenna accountable for failing to keep the public informed about an investigation into the company's actions that has been dragging on for several years now.

The suit alleges that McKenna and the federal government have not taken meaningful steps towards a possible criminal case against the German carmaker after it quietly began reselling 2015 model vehicles that did not abide by pollution limits.

“We have been patient, but waiting for four years and still getting no action to protect Canadians from polluters like VW is completely unacceptable," Tim Gray, the executive director of Environmental Defence, said in a statement. "Minister McKenna must hold this irresponsible company to account to ensure future compliance with Canadian law.”

Volkswagen’s Canadian unit did not respond to queries about the lawsuit, to which it is not named as a respondent.

The company admitted in 2015 to installing software on more than 10 million vehicles that would trick emissions testing equipment into thinking the cars were emitting fewer climate-polluting greenhouse gases than they actually were. At least 100,000 of those vehicles were sold in Canada.

It has agreed to a civil settlement of less than $300 million for Canadian vehicle owners affected by the emissions scandal, and has paid civil penalties imposed by the Competition Bureau of $17.5 million.

But while authorities in the United States and Germany have meanwhile extracted admissions of guilt and billions of dollars in fines from the German carmaker, no similar censure has occurred in Canada despite Environment and Climate Change Canada investigating the scandal as early as 2016.

Lawyer Amir Attaran of Ecojustice said McKenna’s office by law must provide an update to his clients, Environmental Defence, every 90 days.

Two environmental groups, @ecojustice_ca and @envirodefence, are suing the Canadian environment minister, @cathmckenna, for not going after @VWGroup for damages similar to what it has paid out elsewhere for its emission-cheating diesel vehicles.

“But the content of those letters is vapid,” he said in a phone interview, with nothing more than vague statements about “conducting interviews and undertaking investigative strategies” and estimated end-dates that have been missed seven times so far.

McKenna’s office said the minister “takes her responsibilities under the Canadian Environmental Protection Act very seriously” and that Environment and Climate Change Canada (ECCC) enforcement officers have “conducted a robust and comprehensive investigation.”

The enforcement team has “been working closely with the Public Prosecution Service of Canada for more than a year,” Julia Kilpatrick, McKenna’s director of communications, wrote in an emailed response to questions. That includes “providing evidence and other information for their consideration and review.”

She said that because the process is ongoing, the office would have no further comment.

The environmental groups cited a letter (PDF) to car owners in which VW admitted that the 2015 cars cannot be fixed to comply with the pollution standards they were supposed to meet and said the minister "has done nothing to get these polluting cars off the road."

“Yet again, the federal government is bending the law for VW," Attaran, who is also a lawyer with the uOttawa-Ecojustice Environmental Law Clinic, said in the statement. "For two years now, the minister has been making excuses not to prosecute VW or its dealers, despite the fact that VW pleaded guilty to similar environmental crimes in other countries."

The UN's special rapporteur on human rights and hazardous substances and wastes, Baskut Tuncak, said during a visit earlier this year that he was “concerned about the lack of action to prosecute Volkswagen Group and other companies that are implicated in cases where Canadians have been exposed to toxic chemicals or illegal conduct.”

“There appears to be no excuse for the government not to pursue justice and redress in this egregious case of corporate misconduct," he said.

Ecojustice and Environmental Defence said that more than 100,000 cars with 2.0L diesel engines were imported and sold in Canada based on fraudulent regulatory submissions. These vehicles spewed 30 times the approved level of nitrogen oxide, posing a threat to human health, they said.

VW then sold the vehicles in 2017 with a crude “half fix” to the emission software, apparently without government permission, the groups said.

Volkswagen on its website directs owners of offending vehicles to a claim settlement website. It says 2.0-litre vehicles — including the Volkswagen Beetle, Golf, Jetta, Passat and Audi A3 — had until the end of 2018 to either complete a buyback, an early lease termination or surrender the car for inoperability. It also said owners had until then to complete approved fixes in order to receive associated damages.

Claims under a separate settlement for 3.0-Litre vehicles (including the Volkswagen Touareg and several Audi and Porsche models) have a slightly later timeline.

Attaran from EcoJustice said the groups were suing McKenna “to force her to explain what, if anything, she has done to charge and prosecute VW.”

“We would like to see the minister doing what’s right for Canadians, and our environment, instead of a foreign corporation,” he said.

Is this not the

Is this not the responsibility of the Public Prosecutor? McKenna's office has already provided the relevant information to the prosecutor. Are the environmental groups asking her to interfere and put pressure on the prosecutor?