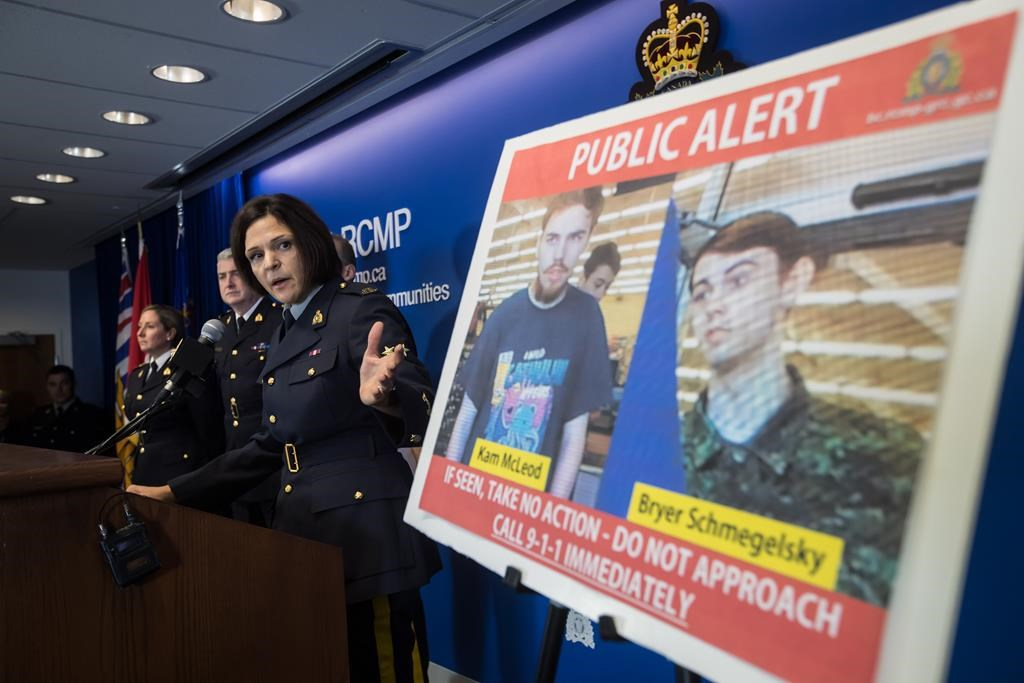 Security camera images recorded in Saskatchewan of Kam McLeod, 19, and Bryer Schmegelsky, 18, are displayed as RCMP Sgt. Janelle Shoihet speaks during a news conference in Surrey, B.C., on Tuesday, July 23, 2019. Photo by The Canadian Press/Darryl Dyck
Previous story
Next story

A nationwide manhunt was on Tuesday for two teenagers labelled by police as suspects in the deaths of three people in northern British Columbia.

RCMP said they believe Kam McLeod, 19, and Bryer Schmegelsky, 18, shot Lucas Fowler of Sydney, Australia, his girlfriend Chynna Deese of Charlotte, N.C., and then killed another man who has yet to be identified publicly.

Fowler and Deesem, who had been on a road trip together in Fowler's blue van, were found on a remote stretch of highway near the Liard Hot Springs on July 15. McLeod and Schmegelsky's burned-out truck and the unidentified man's body were found four days later near Dease Lake, B.C., more than 470 kilometres away from the first crime scene.

McLeod and Schmegelsky, both from Vancouver Island and on their way to Whitehorse to look for work, were originally considered missing by police. That changed Tuesday, though investigators wouldn't say why.

Police did say McLeod and Schmegelsky had been spotted in Meadow Lake, a community in northwestern Saskatchewan, on Sunday, two days after their truck was found. Investigators released photos of the pair that were taken there.

Later Tuesday, they said the pair may have been in Manitoba after a reported sighting in the northern town of Gillam.

In a statement, Fox Lake Cree Nation Chief Walter Spence said police will be patrolling the community all night long as a precaution.

A vehicle was burned and discarded near their reserve of Bird Tuesday, he said, although they haven't confirmed that it was directly connected to the two suspects.

The Fox Lake Cree Nation is about 1,000 kilometres from Winnipeg.

Sgt. Janelle Shoihet said anyone who spotted the teens, both six-foot-four inches tall and each weighing around 169 pounds, should not approach them but call 911.

A woman who answered the phone at a residence listed under Schmegelsky in Wynard, Sask., declined to comment.

"I have nothing to say at this time. Can't you just please leave us alone?" she said through tears before hanging up.

No one answered a phone number listed on Schmegelsky's father's Facebook page and a person who answered the phone at a McLeod residence in Port Alberni hung up.

Police have been in contact with both teens' families to ask for help finding them, she said.

"I'm certain they're being impacted by this news," Shoihet said.

Shoihet said she could not disclose how the unidentified man died. His body was found about two kilometres from the burned-out truck. On Monday, police released a composite drawing of the heavy-set, middle-aged man with a beard hoping he would be recognized.

Claudia Bunce, owner of the Cassiar Mountain Jade Store in Jade City, B.C., said McLeod and Schmegelsky stopped in at some point last Thursday, the day before their burned-out truck was found about 115 kilometres away.

The staff member who saw the boys was too shaken to speak to a reporter, but Bunce said the boys arrived in the truck and visited the store for free coffee. She said they were on their own and she doesn't believe they had a conversation with the employee.

"I don't think they stood out any more than any other teenage boys who were just on the road," she said. "We're a very busy store."

She said the situation was very frightening for everyone who lives in the remote area.

"As you can imagine, the community is very upset about this," Bunce said. "It's very rural — beyond rural. We're on a highway with no cell service. Most of us don't have power. So it's unnerving."

RCMP were at the store on Tuesday gathering hours of surveillance footage and interviewing staff members.

Fowler's father, Chief Insp. Stephen Fowler of the New South Wales Police Force, told the media on Monday that the deaths of his son and his girlfriend was a tragic end to a love story between the inseparable couple.

Fowler said Lucas, 23, was having the time of his life and the family was overjoyed when he met 24-year-old Deese, who were a great pair and fell in love.

Kevin Hackett, an assistant commissioner with the RCMP, acknowledged there were many unanswered questions in the case, but said the Mounties could not release any information that would jeopardize a future prosecution or compromise the integrity of the investigation.

"There are many people who we are yet to speak to who have key facts that could build upon the current evidence and information that we have," he said.