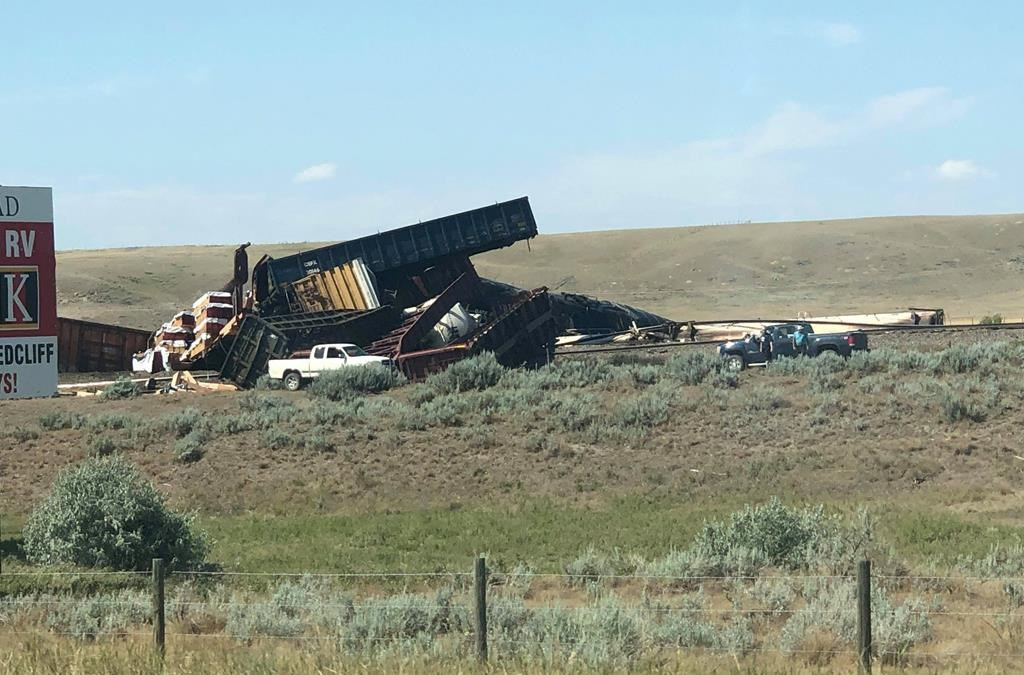 A train derailment is shown near the hamlet of Irvine, Alberta on Friday Aug. 2, 2019. Handout photo by Trehia Steveson
Previous story
Next story

Investigators are trying to determine the cause of a train derailment in southeastern Alberta that forced people from their homes and the temporary closure of a stretch of the Trans-Canada Highway.

Residents in and around the hamlet of Irvine were told to evacuate the area as a precaution after part of a Canadian Pacific Railway train derailed Friday afternoon, however, CPR says the evacuation notice was lifted just before 11p.m.

Part of the highway east of Medicine Hat was ordered closed but was reopened in both directions Friday night.

The Alberta government issued the emergency alert, noting the derailment involved chemical exposure and damage to the rail line. But there was no report of any injuries.

CPR issued a statement Friday night that said two cars carrying styrene were leaking "at a minimal rate from their top valves" and that "those small leaks were being contained."

The statement added that no rail cars had been breached, that CP has established air monitoring in the area, has fire suppression systems on hand if required, and is taking every precaution to protect public safety.

Canadian Pacific said the derailment happened at about 3:20 p.m. and that it had dispatched a team to the site.

The railway said it is working closely with local fire officials, Alberta emergency response officials, local government, the Red Cross and other stakeholders to respond to the accident.

Witness Trehia Stevenson said she was driving down the highway with her mother when they came across the derailment moments after it happened.

"All of a sudden there was a ton of smoke. There was some kind of fire," she said.

"When we pulled up, we could see that the train was derailed. It was all piled up and the smoke was coming from it. I am pretty sure there wasn't any tanker cars. It was cargo cars."

Stevenson said she could only see one car on fire, but there was a grass fire as well.

She said the derailment included about a dozen rail cars and was right on the western edge of the hamlet, less than a kilometre from homes.

Is it just my imagination or

Is it just my imagination or are derailments on the increase? Is this the consequence of inadequate maintenance of rail infrastructure? Or, is it related to the increased length of goods trains? Or, is it related to the reductions in train crew personnel ? Failures in "hot box" monitoring?. Given the toxicity of much of the rail traffic contents, the entire rail shipping infrastructure probably needs an overhaul. But then so does the ocean shipping infrastructure, and the road based shipping industry. Just how much of this long haul goods transportation is required, and how much economic adjustment would be needed to abate the harms arising from it?