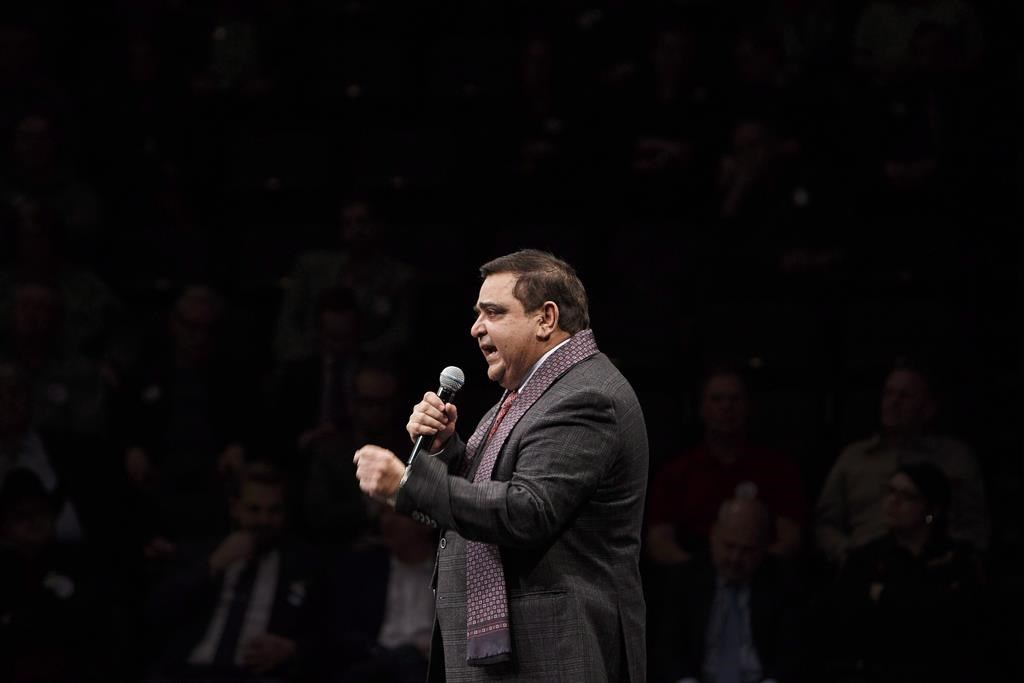 Conservative MP Deepak Obhrai has died after a brief and aggressive battle with liver cancer. Obhrai speaks during the Conservative leadership debate at the Maclab Theatre in Edmonton, on Feb. 28, 2017. File photo by The Canadian Press/Codie McLachlan
Previous story

Calgary MP Deepak Obhrai, the scarf-sporting, fun-loving elder statesman of the Conservative caucus and a beloved character on Parliament Hill who championed the virtues of tolerance and human rights, died Friday just weeks after discovering an aggressive form of liver cancer.

The unexpected news came Saturday morning in a statement that said Obhrai — he just turned 69 last month, roughly the same time he was diagnosed with an advanced Stage 4 case of the disease — died abruptly in Calgary while surrounded by members of his family, who described themselves as "shocked by his sudden departure."

"Deepak was a constant source of joy inside the Conservative caucus," said a statement from "heartbroken" leader Andrew Scheer, with whom Obhrai shared the battle to lead the party in 2016 and 2017.

"He brightened every room he walked into and often injected warmth, kindness, and good humour into our deliberations. I know I speak on behalf of my Conservative colleagues when I say that he will be missed tremendously."

In an interview, Scheer said he only heard "a few days ago" that Obhrai had taken ill.

"I was shocked to hear that because he seemed to be in fine form the last time I saw him when the House was still sitting," Scheer said.

Obhrai is the fourth Conservative MP to die in the last four years, and the second this year: B.C. MP Mark Warawa died in June of pancreatic cancer. Ontario MP Gord Brown died in May 2018 after suffering a heart attack in his Ottawa office, the same fate that befell Lethbridge MP and leukemia survivor Jim Hillyer in March 2016.

"It's been a tough Parliament for our caucus and our party," said Scheer, who called Obhrai an "institution” in the Conservative party. "It's just so sad."

Obhrai, the first-ever Hindu to be elected to the House of Commons, represented Calgary Forest Lawn since 1997 and was the longest-serving Conservative MP and Indo-Canadian in Parliament. He was also the longest-serving parliamentary secretary to a minister of foreign affairs in Canadian history.

Born and raised in Tanzania, Obhrai studied on three continents before settling in Calgary with his family in 1977. He was set to contest his eighth federal election in a campaign that's widely expected to get underway early next month.

Condolences poured in from both sides of the aisle Saturday, with Prime Minister Justin Trudeau tweeting that the "parliamentary family" was mourning.

"Deepak Obhrai dedicated himself to serving his constituents with utmost integrity, and we will miss him dearly," the prime minister wrote.

"A colourful, animated, outspoken MP, he was always genuinely friendly and stuck to his principles," tweeted Liberal colleague Ralph Goodale. "Parliament will miss him."

Obhrai's message of inclusion was at its most prominent during the Conservative leadership race to replace Stephen Harper, when he joined a crowded field of contenders in what he said was an effort to woo back supporters turned off by what they saw as divisive, anti-immigrant sentiment.

His pointed opposition to challenger Kellie Leitch, best known for proposing to require face-to-face interviews with would-be newcomers to Canada and to screen them for so-called "Canadian values," helped to establish him as a progressive voice in a party whose promises in 2015 — banning niqabs during citizenship ceremonies and a "barbaric practices" tip line, to name two — he considered antagonistic.

"We want all his friends, constituents of Calgary Forest Lawn, his supporters from all over the world, and all his colleagues to know that their support and love for our dad continued to inspire him to break every glass ceiling, and overcome every obstacle, so that he could continue doing what he loved the most — standing up for human rights," the family said in a statement.

That statement appeared on Obhrai's Twitter feed Saturday morning, directly above a June 24 photo of members of his campaign team door-knocking in the riding in anticipation of the Oct. 21 election — a jarring illustration of his rapid decline.

In an email to The Canadian Press, former Conservative MP and interim leader Rona Ambrose fondly recalled Obhrai's friendship, as well as his occasionally irreverent bid to lead the party, which she said was loyally endorsed by her own mother.

"My mom rooted for him every step of the way in the leadership race. She especially appreciated when he tried valiantly, albeit failed miserably, to speak French in the French debate! She said politics needed more people like Deepak," Ambrose wrote.

"He told me with all sincerity that he didn't think he would win, but that it was important for his kids, our party and the country to see a 'brown guy' (as he jokingly called himself) run to lead our country," she continued. "He said no matter what, because of those reasons, he would stay in the race till the end. That said everything about his commitment to his family, cultural community, the party and our country."

Alberta Premier Jason Kenney, a former caucus colleague during Harper's tenure as prime minister, paid tribute to his close friend in a lengthy statement posted to his Facebook page.

"Perhaps Deepak's biggest legacy was the key role that he played in the huge upgrading of Canada-India relations during Stephen Harper's premiership," Kenney wrote.

"Those who knew him will always smile in recalling Deepak's winsome sense of humour, which reflected his generosity of spirit. He treated colleagues on all sides of the political aisle with respect, while reminding all of us never to take ourselves too seriously."

Obhrai leaves behind his wife Neena, children Priti, Kaajal, and Amman, and grandchildren Davin Jacob and Evasha. Details for the funeral arrangements were not immediately disclosed Saturday.

— With files from Mia Rabson and Stephanie Levitz in Ottawa

Leitch, Trost among Tory MPs facing challenge for right to run in 2019 election

Calgary MP Deepak Obhrai king of the Conservative caucus, for the moment