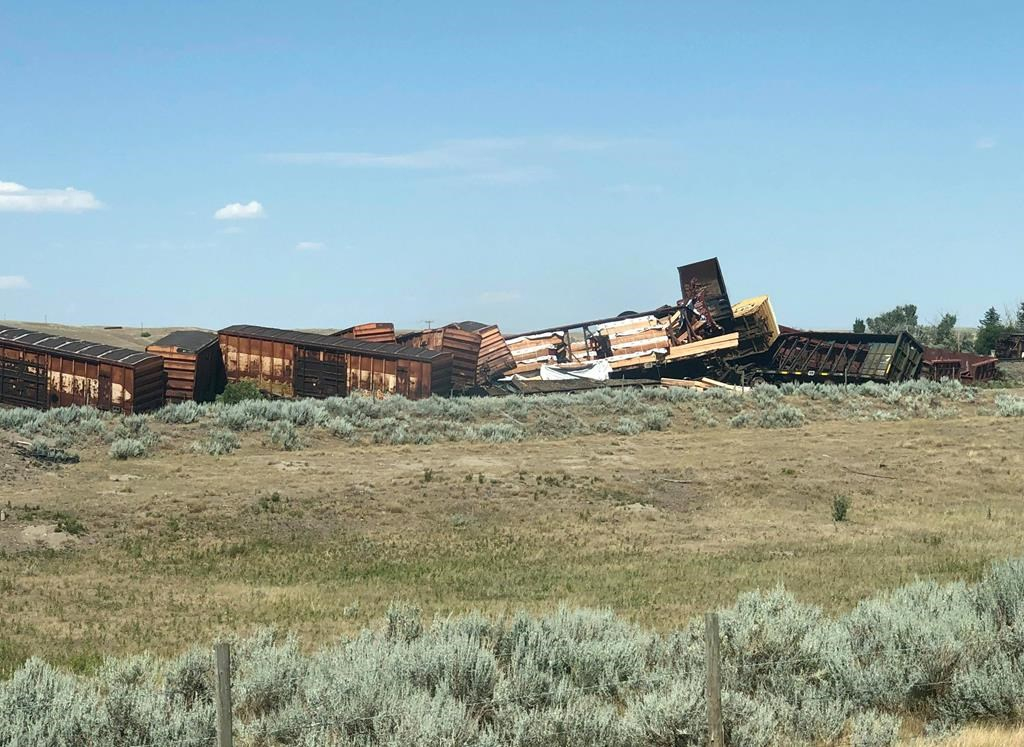 A train derailment is shown near the hamlet of Irvine, Alberta on Friday, Aug. 2, 2019. Handout photo by Trehia Steveson
Previous story
Next story

Residents of a southern Alberta hamlet are back in their homes after an evacuation that followed a train derailment and chemical spill.

Cypress County posted on its website Saturday that the spill, which Canadian Pacific Railway says happened Friday afternoon and involved styrene, has been contained and the evacuation was lifted late Friday night.

A state of local emergency remains in effect remains in Cypress County, but the county says it's due to a grass fire that's been burning since last weekend, and not because of the derailment.

An emailed update from the railway says the leaks on the two styrene cars were contained to their top valves, and that about eight litres of the substance leaked.

The railway says the line reopened Saturday morning at 11 a.m. MT after track repairs and safety inspections were completed.

An investigation into the cause is ongoing, and CP thanked firefighters, government and Red Cross officials for their support in responding to the derailment.

"We also thank local residents for their patience and understanding and apologize for the inconvenience this incident has caused," the railway said in its update.

Styrene is a synthetic chemical used in the manufacture of rubber, plastic and fibreglass, and is flammable.

A provincial government spokeswoman said Saturday that Alberta Environment and Parks is monitoring the company's response.

"The environmental impacts related to this incident are being observed and measured by our department," Jess Sinclair said in an email.

There was no report of any injuries.

Part of the Trans-Canada Highway east of Medicine Hat, Alta., was ordered closed but was reopened in both directions Friday night.

Witness Trehia Stevenson said the derailment included about a dozen rail cars, which she said did not appear to be tanker cars. She said it was right on the western edge of Irvine, less than a kilometre from homes.

Stevenson said she could only see one car on fire, but there was a grass fire as well.