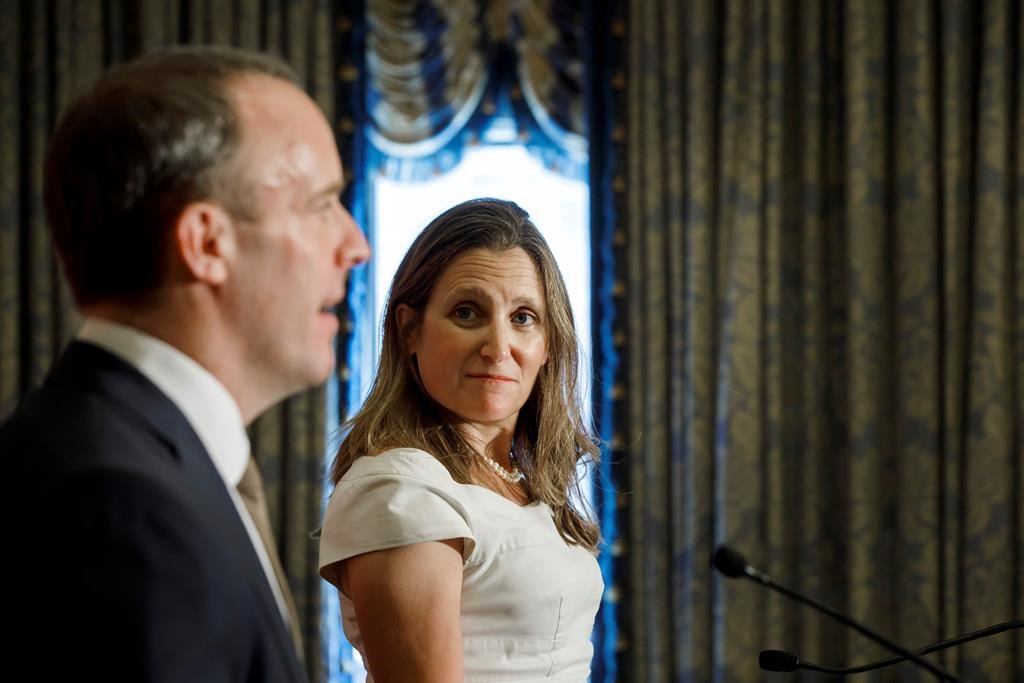 Foreign Affairs Minister Chrystia Freeland and her British counterpart presented a united front Tuesday when it came to voicing concerns about two Canadians detained in China.

Freeland said the cases of Michael Kovrig and Michael Spavor remain a priority as Canada navigates a "challenging" set of circumstances, while U.K. Secretary of Foreign Affairs Dominic Raab said his country supported Canadian efforts on the matter.

"The situation continues to be challenging and we're just going to keep working at it," Freeland told reporters during an appearance in Toronto.

Freeland reiterated that a meeting she had Friday with her Chinese counterpart during a summit of Southeast Asian Nations in Bangkok, Thailand, was a sign of progress.

"It was a positive step that I was able to have a face to face meeting with my Chinese counterpart and we both committed to continue to keep the lines of communication open," the minister said, adding that she had been speaking regularly with the families of Kovrig and Spavor.

Freeland also thanked the United Kingdom for its "strong and public stand" on what she called a difficult issue.

Raab, for his part, said Britain was worried about the two detained Canadians.

"We share Canada's concerns about the detention of Michael Kovrig and Michael Spavor in China," he said.

China detained Kovrig, a former diplomat, and Spavor, a businessman, last December on allegations of espionage.

The detentions are largely viewed as retaliation for the RCMP's arrest of Huawei executive Meng Wanzhou in Vancouver. Meng is awaiting extradition to the U.S. to face allegations of fraud in violating Iran sanctions.

Global Affairs said on Monday that consular officials met for the 10th time with Kovrig, but did not provide details on the visit due to privacy provisions.

Meanwhile, Freeland and Raab said they also discussed shared concerns over Brexit, among other issues.

Raab said Britain will be working with Canada to create a "seamless" Brexit transition in coming weeks, reaffirming the U.K. government will be leaving the European Union on Oct. 31 regardless of whether they come to an agreement with the EU.

"We want to take our friendship with Canada and the Canadian people to the next level on trade, on security co-operation, on human rights and on those global challenges that are beyond any particular region, like tackling climate change," he said.

Freeland said the U.K. was a "hugely important" partner for Canada.

"We are not only allies but actually we are cousins, we're family," she said. "I think that connection is based of course on our strong economic ties, on our military alliance."