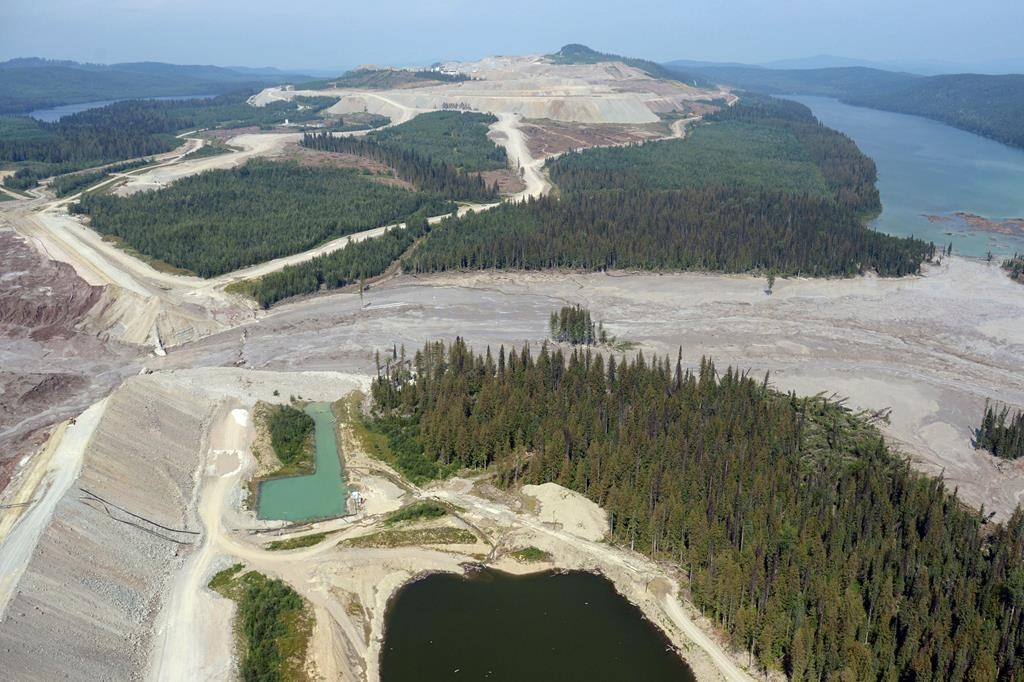 Damage from a tailings pond breach is seen near Likely, B.C., on Tuesday, August 5, 2014. File photo by The Canadian Press/Jonathan Hayward
Previous story
Next story

People are swimming and fishing in Quesnel Lake five years after the largest environmental mining disaster in Canadian history, but residents of Likely, B.C., are still struggling with unresolved emotions about what happened and who will be held accountable for the dam collapse at the Mount Polley mine.

A five-year deadline for federal Fisheries Act charges expired Sunday, while the possibility of other charges under the same act remains with no timeline for a decision. British Columbia missed the three-year deadline to proceed with charges under both the province's Environmental Management Act and Mines Act.

Likely resident Lisa Kraus said the central B.C. community of about 350 people remains wounded, concerned and somewhat divided about the tailings dam breach at the Imperial Metals open-pit copper and gold mine.

The Aug. 4, 2014, collapse sent 24 million cubic metres of mine waste into Quesnel Lake, Hazeltine Creek and other area waterways.

An independent report into the disaster said the dam was built on a sloped glacial lake, weakening its foundation. It said the inadequate design of the dam didn't account for drainage or erosion failures associated with glacial till beneath the pond.

One independent geotechnical engineer described the location and design of the tailings pond as loading a gun and pulling the trigger.

"I don't know that the people who are still so angry would be happy with that or not," she said. "There's still the feeling for some that they're not saying everything and they're not telling us all the truths. I don't like everything that happened but I'm a neutral party."

Kraus said even though she's made fish and chips from trout recently caught in Quesnel Lake, she doesn't drink the water.

"Will I put my cup in the lake again, I don't know," she said. "Before that day I did. I haven't done that since."

Imperial Metals suspended operations in January at Mount Polley over declining copper prices. More than 350 people worked at the mine.

The firm said the suspension would not impact ongoing environmental and remediation work at the Mount Polley site.

An Imperial Metals spokesman did not return a request for comment, but the company's website includes a July 29 update about the cleanup written by the firm's former chief scientific officer.

"While this tailings spill incident was very unfortunate, and significant in terms of sheer size, the environmental impacts have fortunately not been as dire as many had feared," said Lyn Anglin, in the B.C. online publication Resource Works.

Anglin says the company undertook reclamation work in salmon and trout waterways, including Edney Creek, Hazeltine Creek and Quesnel Lake. It also included comments that geochemical studies of mine tailings at the bottom of Quesnel Lake are physically and chemically stable and not releasing metals into the water.

The Department of Environment and Climate Change Canada, which enforces the Fisheries Act, said in a statement that Crown counsel has been conducting a charge assessment related to the breach since last April, but there is no date for a decision and no further comment was available.

Julia Kilpatrick, a spokeswoman for Environment Minister Catherine McKenna, said Canadians can be assured that the government won't hesitate to enforce its environmental laws.

"The fact that five years has elapsed since the incident occurred does not preclude the commencement of prosecution proceedings under the Fisheries Act," she said in a statement.

Mining Watch Canada spokesman Ugo Lapointe said if the federal government does not proceed with charges this weekend, it could be a long wait.

"We have a deficient enforcement regime for cases like these," said Lapointe, adding it could be another two or three years before there is any resolution.

"The Fisheries Act, which is supposed to protect Canadian waters and fish habitat, is not working," he said. "We haven't seen any charges laid by any level of government for the largest mining spill in Canadian history. It's very disconcerting to witness the situation."

Lapointe said he suspects federal prosecution officials are wrestling with deciding whether they can prove there was negligence or knowledge that the tailing's pond location and design could fail.

"Proving damages is the easy part," he said. "What's difficult to prove is was there a total lack of due diligence on the part of the operators. They need to prove that the operator did not do all it should have done to prevent this beyond any reasonable doubt."

Imperial Metals lawsuit against several engineering firms alleging negligence and breach of contract was settled out of court last year, resulting in the company receiving about $108 million.

Engineers and Geoscientists BC, the regulatory body for engineers in the province, said it has a May 2020 disciplinary hearing scheduled for engineer Todd Martin and is confirming hearing dates for engineers Stephen Rice and Laura Fidel in connection with the collapse of the Mount Polley dam.

"It was a big lesson," she said. "It's a lesson of what happens when you don't have a good regulatory regime."

Mungall said the disaster was the impetus for the B.C. government's $20 million investment this year to hire 65 safety and enforcement officials and implement changes to the mine permit approval process.

She said the changes resulted from 25 recommendations of a task force report and a separate probe into the disaster by auditor general Carol Bellringer.

Mungall said she expects the government to introduce policy changes this fall that ensure mining companies have money set aside to pay for reclamation work.

Back in Likely, Kraus said she'll look out her window Sunday morning and think back to five years ago.

"That's something you won't forget, waking up and being told that this has happened and hearing the rush of the water and knowing this plume is potentially coming down the lake," she said.

This company should bare the

This company should bare the $20 million cost of the BC government having to hire additional staff to police this and other mines. The BC taxpayer should not have to pay these costs.