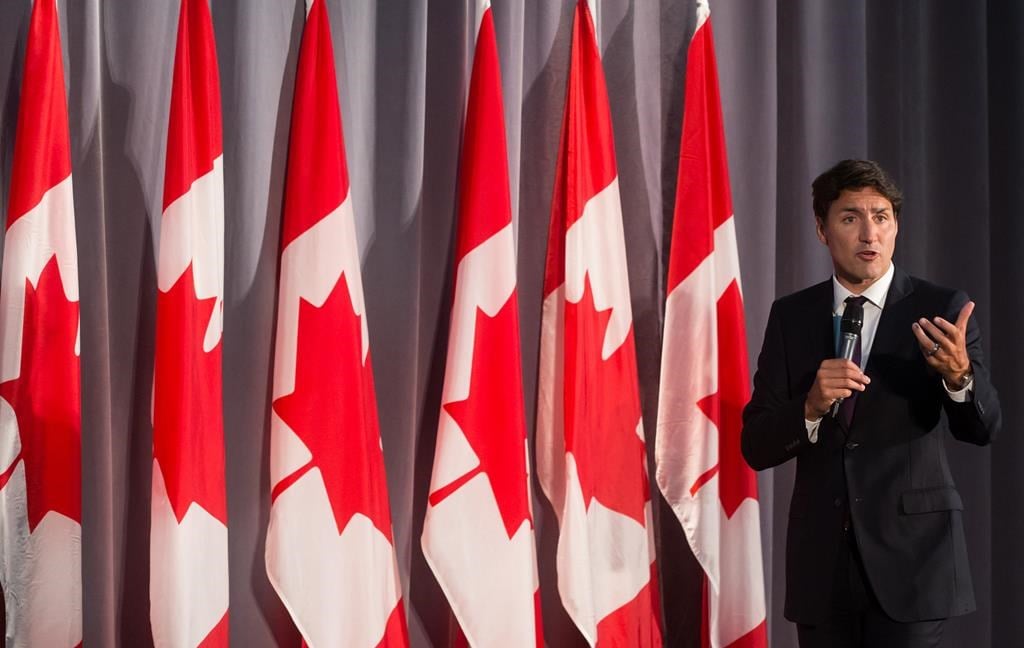 Prime Minister Justin Trudeau is facing pressure from civil society groups to update Canadians before the October election on his government's review of a multibillion-dollar arms deal with Saudi Arabia.

The Liberals launched a review of the $15-billion contract to ship light armoured vehicles to the Middle East kingdom last fall after the killing of journalist Jamal Khashoggi inside the Saudi consulate in Turkey.

The announcement was also made at a time of deep concern over the risk Saudi Arabia could use the weapons in the ongoing war in Yemen, which has been devastating for civilians.

A letter sent this week to Trudeau from a dozen organizations says the public has a right to know the status of the review now that more than nine months have passed since the government first announced the probe.

"No update with respect to the progress of the review has been offered, bringing the sincerity of the effort into question," said the letter, signed by organizations including Amnesty International Canada, Oxfam Canada and Save the Children Canada.

"Canadians are entitled to know the outcome of the government review, and a clear answer with respect to your government's position on the export of LAVs from Canada to Saudi Arabia."

The Liberal government halted all new export permits to the kingdom last fall, sanctioned 17 Saudi nationals and started the review of arms sales to the country amid concerns about a lack of a credible, independent investigation into Khashoggi's killing and Saudi participation in the conflict in neighbouring Yemen.

The letter said any further delays to the review or the government's eventual decision might mean that consequential actions will come too late, especially since Canada has continued to ship the vehicles to Saudi Arabia — including 127 last year alone, according to federal numbers.

Over the six months of 2019, government data show Canada has sold $1.2 billion worth of "tanks and other motorized armoured fighting vehicles (including parts)" to the kingdom.

The co-authors called on the government to suspend the LAV sale, and also spelled out the steps taken to date by other Western countries to stop or suspend arms sales to Saudi Arabia, including the United Kingdom.

A British court ruled in June that it was unlawful for the U.K's government to export arms to Saudi Arabia. The British government intends to appeal the ruling, but new sales have been suspended in the interim.

Adam Austen, a spokesman for Foreign Affairs Minister Chrystia Freeland, said Wednesday in an email that "as we have said before, we are reviewing export permits to Saudi Arabia and no final decision has been made. While this review is ongoing, no new permits have been issued."

The situation has put the government in a difficult spot — breaking the deal could eliminate domestic jobs and raise questions about Canadian contractual commitments.

Trudeau has also said ripping up the contract would cost taxpayers "in the billions of dollars." The prime minister told CTV News in an interview last December that his government was trying to see "if there is a way of no longer exporting these vehicles to Saudi Arabia."

The deal was signed in 2014 by the former Conservative government and the vehicles are being built by General Dynamics Land Systems in London, Ont.

In his email, Austen also argued the Trudeau government has taken steps to strengthen export controls with recently passed legislation. He said it will enshrine human rights into Canadian export laws and allow Canada to accede to the United Nations Arms Trade Treaty.

"Bill C-47 creates a new legal requirement that the Canadian government must deny export permits if there is a substantial risk that the export would result in a serious violation of human rights, including serious acts of gender based violence."

Canada will become a state party to the Arms Trade Treaty on Sept. 17.

Justin Mohammed, a human rights law and policy campaigner at Amnesty International Canada, said Canada's new international obligations under the Arms Trade Treaty will call into question its exports to Saudi Arabia. An article in the treaty states that a country must reassess any existing deals if new information comes up.

"We think that that's something that Canadians would want to know about," Mohammed said of the review.

"They would want to know and understand that, OK, Canada has a relationship with Saudi Arabia where we're exporting these vehicles — but would be very concerned about the notion of Canadian-made weapons being used in a conflict where we know these types of crimes have been taking place."