By The Canadian Press in News, Politics | August 9th 2019 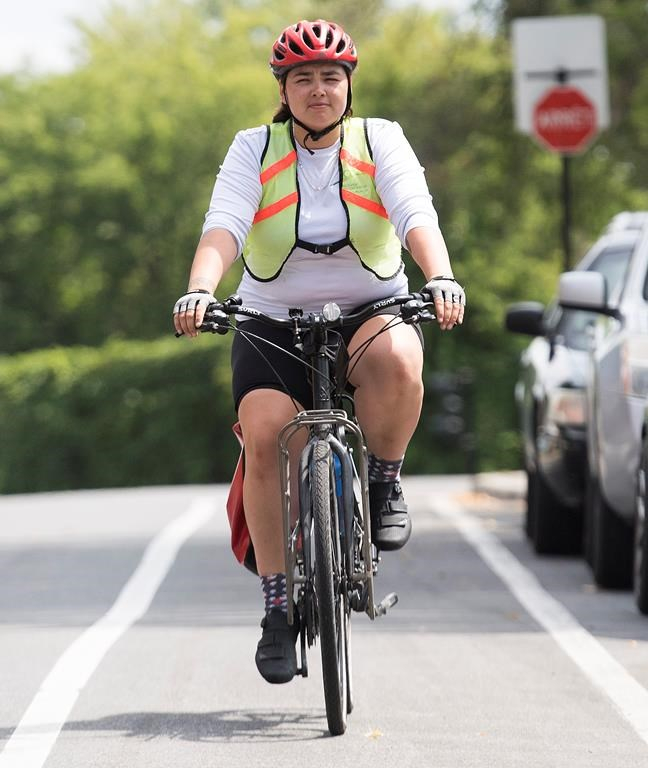 Hannah Tooktoo cycles along a street in Montreal, on Thursday, August 8, 2019. Hannah has been biking across Canada to raise awareness about suicides in the north. Photo by The Canadian Press/Graham Hughes
Previous story

Hannah Tooktoo, an Inuk mother from Nunavik, Que., descended from her bike Thursday, 55 days after pedalling across the country to raise awareness to the suicides that are ravaging her community.

Tooktoo, 24, started her journey in Victoria without knowing if she would be able to finish. Eight weeks later, she arrived in Montreal's downtown Cabot Square square to cheers and applause from supporters.

"It has been really good for me — for my body, for my soul," said the visual arts student from Montreal's Dawson College. She called her tour, "Anirnimi Kipisina," which means "Do not cut your life short " in Inuktitut.

"I'm good, I'm very strong right now," she said. "My body feels good. My legs are good. I feel really good. In the last years, this is the best shape I've been in."

In Nunavik alone, a massive territory home to 14 communities numbering about 13,000 people, 19 people — including five children — killed themselves during the first half of this year, according to a July report by Montreal La Presse.

In 2018, the total number of suicides in Nunavik was 36, according to the news organization.

Statistics Canada released a report in June that stated from 2011 to 2016, suicide rates among First Nations people were three times higher than among the non-Indigenous population.

But among the Inuit, "the rate was approximately nine times higher than the non-Indigenous rate."

Tooktoo said she travelled through cities and many Indigenous communities along her trip. She said she was surprised at first by the welcome she received.

"A lot of people don't want to talk about suicide," she said.

"It's a heavy subject, it's personal. A lot of people have been affected by suicide, a lot of Indigenous and Inuit people especially, and I wanted to talk about that and they were very welcoming and very open, which was a beautiful surprise for me."

When she first started, Tooktoo said she would walk into band council offices and had to explain her project. Officials would make time for her. Sometimes over lunch, other times "right then and there we would talk about their community."

But more towards the end of her trip, people were waiting for her to arrive.

"They saw my tour and they're like: 'I'm here, let me make an event!' And they made an event all on their own — no prompting from me. It's been a privilege to be able to speak to them and to listen to them."

Tooktoo said she was at times discouraged when the terrain got tough. At one point she began crying in the mountains of British Columbia.

"There was a point where I was going uphill in British Columbia and I was going like five kilometres per hour and looking at the beautiful view, I started crying from being thankful," she said.

And the tears came back when she arrived home, because she saw her three-year-old daughter.

"My daughter's been missing me a lot and I've been missing her too," Tooktoo said. "Since we've been reunited, she's been stuck to my side for the last few days."