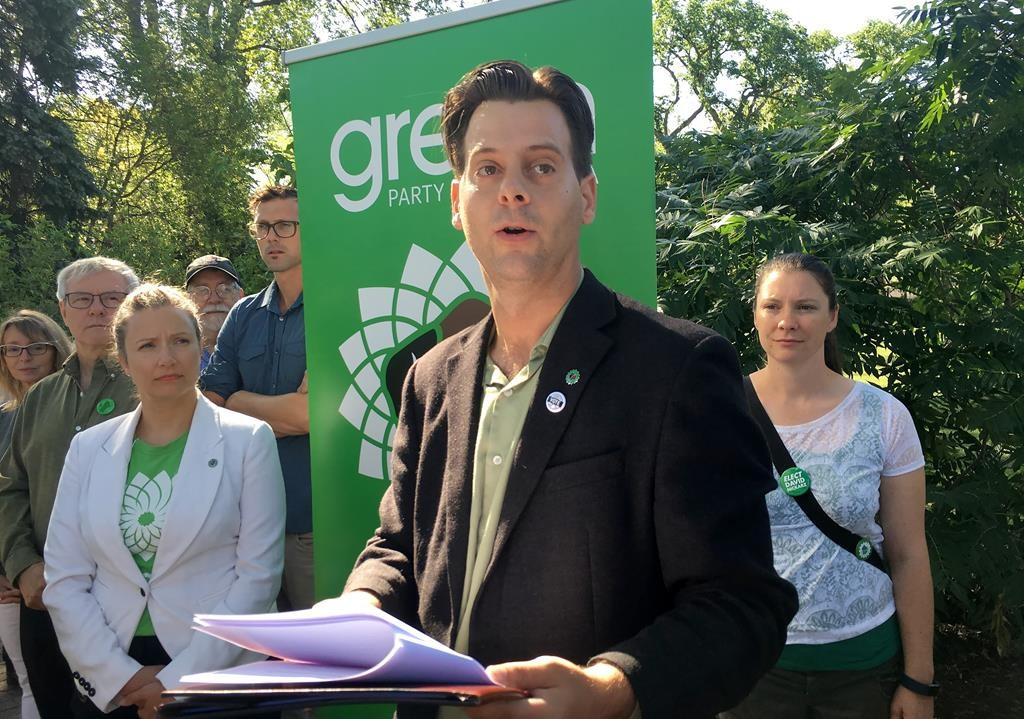 Manitoba Green Party Leader James Beddome talks to reporters as he releases his party's platform for the Sept. 10 Manitoba election, in Winnipeg on Friday, Aug. 9, 2019. Photo by The Canadian Press/Steve Lambert
Previous story
Next story

The Manitoba Green Party is calling for a rising carbon tax and free public transit as politicians of all stripes gear up for a provincial election call due next week.

The Greens released their campaign platform Friday, which includes a carbon tax of $50 per tonne that would start next year and increase every year by $10.

Part of the money would help pay for free transit, a guaranteed basic income to fight poverty and subsidized inter-city bus service in rural and northern areas.

"A number of those initiatives, obviously, are going to require some investment," Green Party leader James Beddome said.

"We have to realize that if we're going to address climate change, there is a cost to it."

The platform contained few details and no cost estimates. Beddome said those will come later.

He would not commit to a date to balance the budget. The governing Progressive Conservatives and Opposition NDP have said they would do so by 2024.

The Greens have never won a seat in the Manitoba legislature, but came a close second in the Wolseley constituency in Winnipeg in the last election. The party feels buoyed by a rise in Green support in other provinces.

Manitobans will go to the polls Sept. 10.

Premier Brian Pallister announced in June he was moving up the election from its scheduled date of Oct. 6, 2020. Pallister must launch the campaign early next week to allow for the minimum 28-day campaign period under provincial law.

Pallister held a campaign-style event Friday to tout his government's record since taking office from the NDP in 2016. He pointed to fulfilled promises such as a smaller deficit, controlled spending and a cut in the provincial sales tax to seven per cent from eight.

"This election that's coming up, apparently fairly soon, is going to be about trust and taxes," Pallister said.

In a recent pre-campaign ad, Pallister acknowledged having "asked a lot" of Manitobans. Some of the biggest reforms have come at three Winnipeg hospitals that have seen their emergency departments reduced to urgent care centres that do not handle life-threatening issues such as heart attacks.

Pallister said Friday the changes are needed to streamline a system that had among the longest wait times in Canada.

"We have had the courage to make many of the changes and more has to happen to improve our system."

The New Democrats are focusing their campaign on health care. They say the government's reforms have led to nursing shortages and other problems.

NDP candidate Mark Wasyliw released documents Friday from the Winnipeg Regional Health Authority obtained under the province's freedom of information law. The documents show $420,000 was spent in the first three months of this year on hiring private nurses to fill in personnel gaps.

The Liberals, with four legislature seats, have yet to nominate candidates in more than half of the province's 57 constituencies.

Leader Dougald Lamont said they are ramping up their campaign machine.

"We should be close to 40 (candidates), I think by Tuesday and then hopefully adding most of (the remaining) by the end of the week."