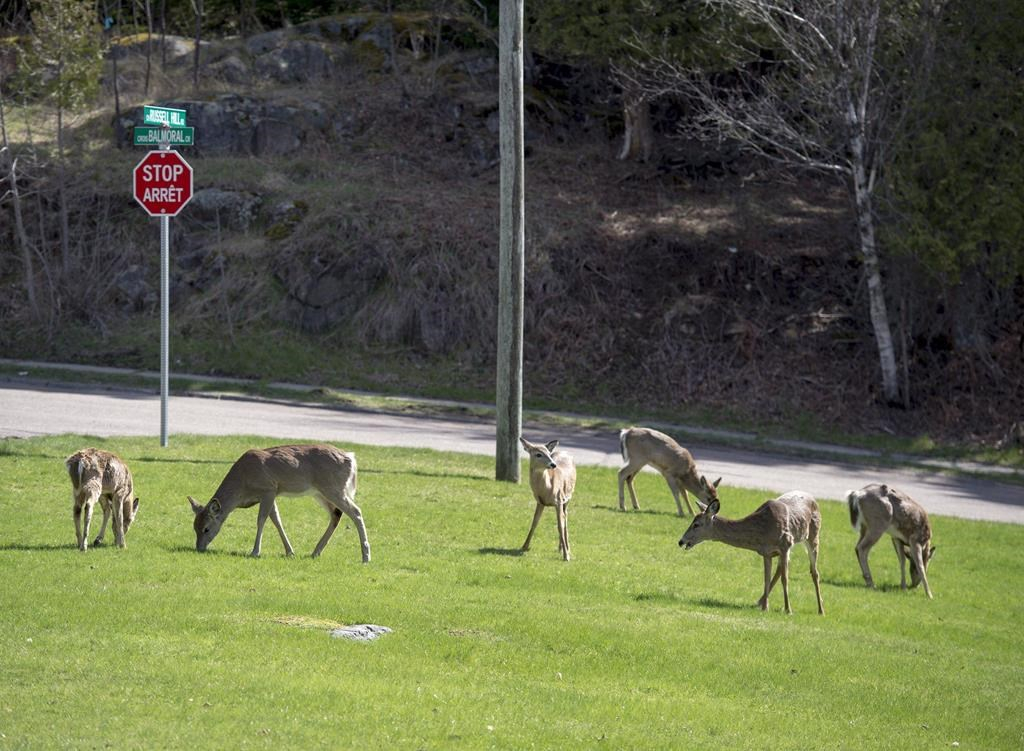 Deer graze on a grassy area in a Saint John, N.B. neighbourhood on May 5, 2018. File photo by The Canadian Press/Andrew Vaughan
Previous story
Next story

As roaming deer become a growing problem in New Brunswick municipalities, destroying gardens and even confronting pedestrians, the New Brunswick government is planning a controlled bow hunt within the city of Saint John this fall to deal with the nuisance.

A public meeting is set for Wednesday evening to explain the program to residents of a Saint John neighbourhood who have been complaining about deer walking in the streets and destroying gardens.

It is just the latest Canadian community to call for action as wild animals are pushed into populated areas by development or predators.

Joe Kennedy, a biologist with New Brunswick's Department of Energy and Resource Development, said deer have been a growing problem for the last 10 years, and a controlled bow hunt was first launched in communities east of Saint John four years ago.

"The Kennebecasis Valley communities were really the first to express concerns about deer densities," he said. "Residents were complaining to their councils about damage to their gardens and deer on roads."

The controlled hunts take place during the hunting season, using regular hunters. Private property owners are eligible for special permits, depending on the size of the property and the number of deer they see on their land, allowing them to kill between one and 10 deer per property.

Those hunts have killed 476 deer so far, but Kennedy said more deer are migrating into the communities and reproducing at a rapid rate.

Residents of nearby St. Andrews took out a full-page newspaper advertisement last week demanding action from the province to reduce the deer population, raising concerns about traffic accidents and the risk that deer are infested with ticks carrying Lyme disease.

"The latest number provided by the department is that we have over 20 deer per square kilometre," said Brad Henderson, deputy mayor of St. Andrews, adding that the normal density would be three to five. "We are significantly overpopulated for deer."

It is common to see deer suddenly crossing roads, walking down main streets, or laying down on lawns or in gardens in the scenic tourist town. "Many families have had more than one collision with deer," Henderson said.

He said there have been cases where motorcycles have collided with deer and where pedestrians were challenged by the animals.

A bow hunt has been used in St. Andrews for the last two years, but Henderson said more needs to be done, such as capturing deer and taking them elsewhere. "We're open to anything they're willing to do," he said.

David Bird, emeritus professor of wildlife biology at McGill University, has been studying the issue of wildlife in urban areas for many years and in the 1980s wrote a book called City Critters.

He said deer are far more than just a nuisance in your garden. "White-tailed deer, and by default the black-tailed deer, are the most dangerous mammals in North America," he said.

Because of their involvement in road accidents, he explained, "They kill more people than any other mammals, including cougars and grizzly bears and moose."

Bird, who now lives in British Columbia, said authorities near Victoria are trying birth control as a solution to their deer problem. They are catching females and administering a contraceptive vaccine, but Bird said he isn't optimistic.

"It was tried in New Jersey, and it turned out to be a miserable failure," he said.

There are currently about 73,000 deer in New Brunswick.

Bird suggested fencing to keep them out, but Henderson said fencing too many yards in his town would detract from the historic streetscapes.

Kennedy said park rangers are also trying hazing, waving bright sticks and making noise in an effort to steer deer away from certain areas. He said the deer have become too comfortable in urban areas and need a good scare to keep them away.

Northeastern US seeks to prevent arrival of deer disease

By Associated Press | News, US News, Politics | October 8th 2018
State Of The Animal