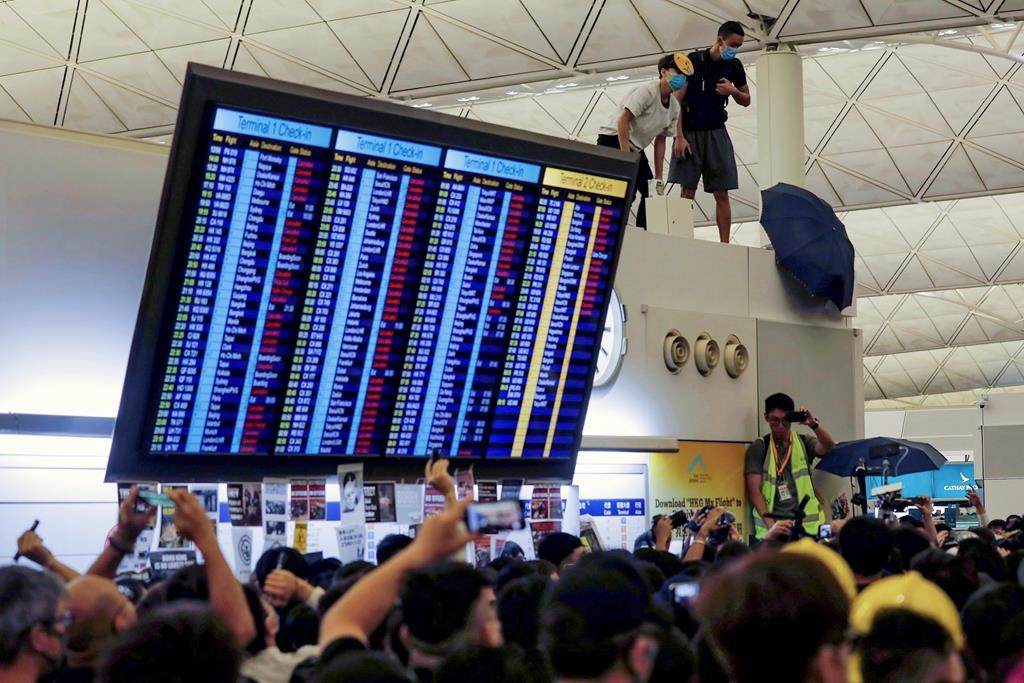 Protesters use umbrellas to block surveillance cameras during a demonstration at the Airport in Hong Kong, on Tuesday, Aug. 13, 2019. Photo by The Associated Press/Vincent Yu
Previous story
Next story

Prominent human rights activists and Chinese political dissidents warned Tuesday about the potential for a brutal crackdown on protesters in Hong Kong.

People in Hong Kong have taken to the streets in massive demonstrations since June, initially to protest a law concerning extradition. But the protests have increasingly called for democratic reform in the territory.

Protesters recently took over the Hong Kong airport and have clashed repeatedly with police. Chinese military forces have also be seen massing near the border of the territory.

In Canada, the head of a group advocating for human rights in China said she's worried the Chinese government will crush the protests ahead of Oct. 1, the 70th anniversary of communist rule in China.

"Our fear is that the Chinese government, the Hong Kong government, would use whatever tactics and resources they have" to end the protests ahead of the anniversary, said Winnie Ng during an event in Ottawa.

"They will not stop until that is achieved," she said.

Ng and others involved in promoting democracy in China gathered at Amnesty International Canada's Ottawa headquarters to mark the unveiling of a memorial to Liu Xiaobo, a Chinese political dissident who was imprisoned in 2009 because of his pro-democracy activism.

The memorial is a sculpture of an empty chair, symbolizing Liu's absence from a ceremony to receive his Nobel peace prize in 2010 because of his imprisonment in China. Liu died in 2017.

Also at the event Monday were veterans of the Chinese pro-democracy movement such as Wang Juntao, who played a prominent role in the deadly 1989 Tiananmen Square protests and was a friend of Liu.

"When I see what's happening in Hong Kong, it's very familiar for me," said Wang, who first joined the pro-democracy movement in 1976 as a high school student.

He said activists like him who are overseas are encouraging young people in Hong Kong to fight for democracy but are also incredibly worried about what actions the Chinese government might take.

"Before June 4 (1989), those students who were fighting in Tiananmen Square didn't believe the Chinese government would be cruel, with tanks and machine-guns," Wang said, recalling the massacre that killed hundreds of civilians and resulted in thousands of arrests.

"I think most Chinese people finally believe the Chinese government will use those to crack down in Hong Kong."

Some at the event took the chance to call on the Canadian government to be both more firm in its dealings with China and to speak out in support of the Hong Kong protesters.

Ng said there was a need for "urgent intervention" from the international community to put pressure on Hong Kong to stop police violence, investigate that violence, and release protesters detained over the past months.

"From the Canadian government and from the international community more widely, we expect and demand more," said Alex Neve, the head of Amnesty International Canada.

Neve acknowledged that Canada is in a "very tense place right now" when it comes to its relationship with Beijing.

"We understand they're treading carefully, but we nonetheless think there's space and need for Canada to go further" along with other countries, he added.

Chinese-Canadian relations have become increasingly tense after the arrest of Huawei executive Meng Wanzhou in December, on behalf of American authorities who want to extradite her. In retaliation, the Chinese government detained two Canadians, Michael Kovrig and Michael Spavor, and have instituted a series of trade restrictions.

Ti-Anna Wang, a political dissident and the daughter of a pro-democracy activist imprisoned in China, said the Canadian government should be doing more to support the protesters and make its position clear to China.

"With what's happening in Hong Kong, we need to see the Canadian government be very vocal in their support of what they should believe in," she said.

The government should be prioritizing human rights and democracy in their negotiations with the Chinese government, but "I don't think we've seen that in the last few years," she said, suggesting the focus was on economic considerations instead.

Prime Minister Justin Trudeau told reporters Monday he was "extremely concerned" about the situation in Hong Kong and hoped there would be a de-escalation soon.

On Tuesday, Conservative leader Andrew Scheer tweeted his support for the democratic protests, saying "Now, and in the coming days, we are all Hong Kongers," a call-back to John F. Kennedy's anti-communist speech in Cold War Berlin.