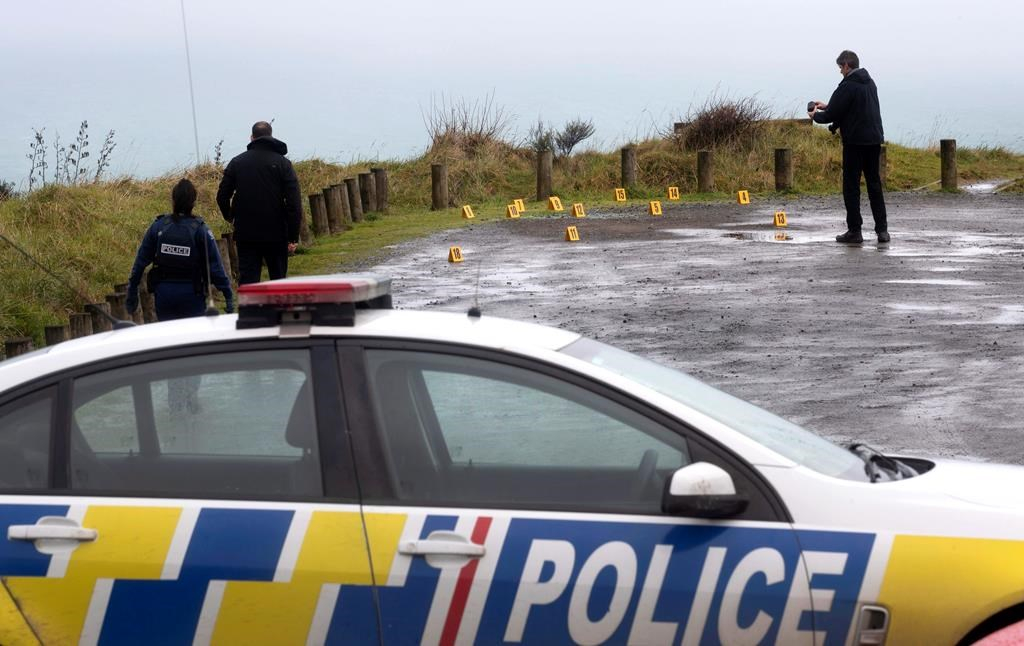 New Zealand police have charged a man with murder after a tourist was killed in a seemingly random attack on a van that sparked a large manhunt after the victim's Canadian fiancee reported the shooting.

Police have identified the dead man as 33-year-old Sean McKinnon of Australia.

The woman, identified by Canadian sources as Nova Scotia native Bianca Buckley, was in the van with McKinnon when someone fired shots into the vehicle.

The 23-year-old suspect made his first court appearance Saturday to face charges of murder, aggravated robbery and threatening to kill.

Police arrested him late Friday after heavily armed officers searched for him all day. His name was not released.

Several of McKinnon's family members travelled from Australia for the court hearing.

Emmeline McKinnon, his sister, told reporters outside court that the family didn't know how it was going to put its lives back together.

"We're just really sorry that he's gone. He loved being over here, he loved the surf here," McKinnon said. "He loved the lifestyle and the place. We're glad he wasn't too far from home. We're just going to miss him a lot."

Police said the incident began just after 3 a.m. on Friday when McKinnon and Buckley, 32, were asleep in their camper van at a scenic spot near the seaside town of Raglan.

Emmeline McKinnon said the family was supporting their brother's fiancée.

"I cannot even begin to understand what she's gone through as a person. She's a really strong young woman," she said.

In Nova Scotia, Sacred Heart School of Halifax announced Buckley, a 2005 graduate, had been involved in a "violent incident" in New Zealand in which her fiance was killed.

The school noted in a Facebook post that the Buckley family appreciates the prayers of the school community.

"Bianca thankfully is safe," the school said in the post. "Our thoughts are with Bianca and her family and of course with the McKinnon family."

Buckley's parents, reached in Halifax, said Friday they had spoken with their daughter after the attack.

"I'm devastated," her mother said. Her father said they preferred not to comment any further. "It's an absolutely unbelievable event," he said.

A statement from Counties Manukau Health in Auckland, which Buckley listed on her Facebook page as her employer since January, said the organization is providing support to one of its staff members, a midwife, who was involved in the "tragic incident."

The Sydney Morning Herald reported that McKinnon grew up in the town of Warrnambool, Australia, about 250 kilometres southwest of Melbourne, and that friends remembered him as a talented musician who liked to surf big waves.

Wayne Such told the newspaper that McKinnon was a "genuine, gentle man with a heart of gold."

— with files from The Associated Press and Sidhartha Banerjee in Montreal