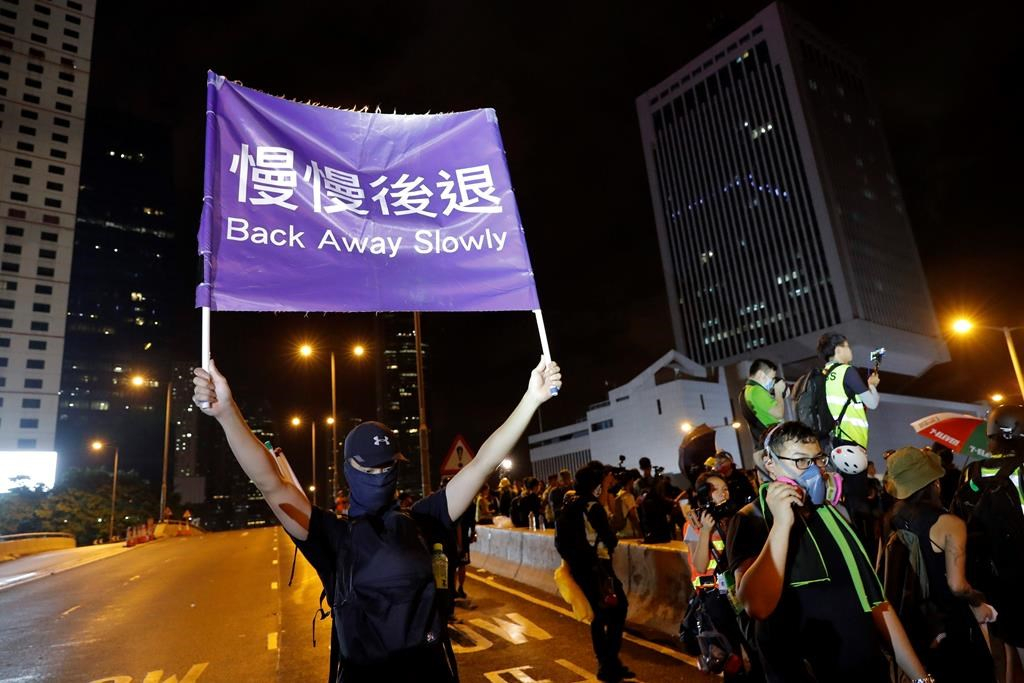 A demonstrator holds up a sign reading "Back away slowly" to encourage other demonstrators to leave, near the Chinese Liaison Office in Hong Kong, on Sunday, Aug. 18, 2019. Photo by The Associated Press/Vincent Thian
Previous story
Next story

Canadians in Hong Kong are watching nervously as tensions escalate between pro-democracy protesters and police but so far, the Canadian consulate in the region is seeing no obvious signs of their concern.

Both the Immigration and Global Affairs departments say there's been no surge in call volumes to the consulate, nor a sudden spike in applications for passports or any other immigration documents.

"We stand ready to provide consular assistance to Canadians who are in Hong Kong as needed," Global Affairs said in a statement.

The department has been working on contingency plans to assist the 300,000 Canadians in the region for some time, Foreign Affairs Minister Chrystia Freeland said last week, but what those plans might look like is unclear.

In 2006 and in 2011, the Canadian government used military and civilian planes to airlift citizens caught in conflicts in Lebanon and then in Libya.

Prime Minister Justin Trudeau sidestepped a question Monday about whether a similar option was under discussion.

"We repeat our calls for peace, for de-escalation, for listening by local authorities and by the Chinese government to the preoccupations expressed by the citizens of Hong Kong," Trudeau said at an event in Quebec on Monday.

Citizens there have been urged to register with the Canadian government so they can be reached if necessary, but some have suggested the consulate be more proactive.

When the Hong Kong airport was closed last week due to demonstrations, some countries dispatched diplomats to the terminals to assist their country's citizens who were caught up in the fracas.

Canada did not, with consular staff defending the move on their Facebook page as unnecessary since no planes from Canada were scheduled to arrive, and no one had called them for help.

There have been months of protests in the semi-autonomous region as some residents accuse the Communist Party-ruled Chinese government of chipping away at Hong Kong's democratic rights.

The movement's demands include the resignation of Hong Kong leader Carrie Lam, democratic elections and an independent investigation into police use of force.

Available government information provides an unclear picture of what impact the clashes might be having on the movement of people between Canada and Hong Kong.

Data provided by the Immigration Department shows that as of Friday, passport applications by Canadian citizens — who would need the document to return to Canada — are below the levels in the same three months as last year, suggesting no scrambling on the part of citizens to ensure they have the right paperwork to come home.

There has also been no increase in requests for travel cards from Canadian permanent residents living in Hong Kong, the Immigration Department confirmed Monday.

Whether the protests and counter-actions have prompted an increase in temporary visas — people seeking to briefly escape the fracas, for example — won't be known until fall.

Current data only covers the opening days of the protests. Between January and April 2019, there were 1,653 applications for temporary visas, compared to 1,598 in the same time frame in 2018.

Canada warns about travel to Hong Kong, agrees with calls for peace